Through a quiz and discussion, students consider quotes by women activists, from Helen Keller to Aretha Franklin. 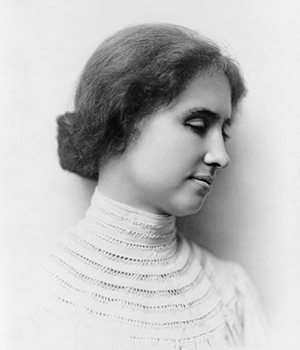 March has been officially designated as Women’s History Month, a time to celebrate women’s achievements throughout world history. Events and projects in schools, organizations, the media, and government agencies honor the lives and work of women artists, scientists, athletes, activists, politicians, musicians, and entertainers, among others. Of course, the very  fact that a month is seen as necessary to commemorate women’s accomplishments says a lot. There is no need for a Men’s History Month.

This lesson focuses on women and activism. It provides a brief introduction to the thoughts of women activists and writers on the responsibility of all citizens to right society’s wrongs.

Read the following quotations by women who’ve made an impact on the world. Choose one or more answers to each question about the quotes.

“There is no social change fairy. There is only the change made by the hands of individuals.”  — Winona LaDuke

Winona LaDuke is an environmentalist advocate and author, an economist and politician and a Native American (Ojibwe) activist. She’s been a leader of organizations including Honor the Earth and the Indigenous Women’s Network, and works on environmental justice, climate change, and Native American land rights issues.

Which of the following would best restate the sentiment of her words?

“In the end, politics is only as remote and as tarnished as we ordinary citizens let it become.”  — Paula DiPerna

Paula  DiPerna is a writer, environmentalist, and filmmaker. In addition to working with the (Jacques) Cousteau Society for twenty years, she led the Joyce Foundation and Chicago Climate Exchange. Her book Cluster Mystery exposed the corporate responsibility for a leukemia outbreak in Woburn, Massachusetts.

What is DiPerna saying?  True or False:

DiPerna believes we all bear some responsibility for the sad state of the world.

“People always say that I didn't give up my seat because I was tired, but that isn't true. I was not tired physically, or no more tired than I usually was at the end of a working day. I was not old, although some people have an image of me as being old then. I was forty-two. No, the only tired I was, was tired of giving in.”  — Rosa Parks

Rosa Parks  may be the most famous woman to emerge from the Civil Rights Movement. Her arrest for refusing to give up her seat on a segregated bus provided the spark for the Montgomery Bus Boycott in 1955. The year-long boycott not only catapulted Martin Luther King to prominence, but helped ignite the national movement for civil rights. Rosa Parks, who had been a civil rights activist well before her arrest, continued to speak out for the rest of her life.

What is the significance of Parks’ statement?

“People turn to revolution only when every other dream has faded into the dimness of sorrow. When we look upon these mighty disturbances which seem to leap up so suddenly out of the troubled depths, we find that they were fed by little streams of discontent and oppression. These little streams which have their source deep down in the miseries of the common people, all flow together at last in a retributive flood.” — Helen Keller

Helen Keller is best known for her courageous struggle to overcome the disabilities of blindness and deafness. She became a prolific author, speaker, and political activist. Keller spoke out in favor of socialism, women’s suffrage, birth control, disability rights, civil liberties, and against war.

From the Helen Keller quotation, which of the following might you take to be true?

Granny D was a political activist was gamed national attention when, in 1999, at the age of 88, she set out on a cross-county march to support campaign finance reform. She walked 3200 miles, and arrived in Washington DC at age 90. Several months later she was arrested for reading the Declaration of Independence aloud in the U.S. Capitol. (Granny D died 10 years later, at the age of 100.)

What is the point of Granny D’s short statement?

“You have to act as if it were possible to radically transform the world. And you have to do it all the time.” — Angela Davis


Angela Davis is an African-American scholar, activist, speaker, and writer. She has been active in radical causes—including the Communist Party and the Black Panther Party-- for almost six decades. Her politics got her fired from the University of California and led to her arrest and trial (proven innocent) for participating in an attack on a courtroom. In January of 2019, she was denied a civil rights award because of her support for the Palestinian cause.

“Angela Davis must go free. Black people will be free. I've been locked up (for disturbing the peace in Detroit) and I know you got to disturb the peace when you can't get no peace.” — Aretha Franklin

Aretha Franklin (“Queen of Soul”) was a best-selling singer for thirty years and a soul music legend. Franklin was generous in her support for civil rights causes, including the rights of Native Americans. She sang at Barack Obama’s first inauguration.

Based on the quotation, one might suppose that Aretha Franklin…

How wonderful it is that nobody need wait a single moment before starting to improve the world. — Anne Frank

13-year-old Anne Frank and her family went into hiding in the Nazi-occupied Netherlands in 1942.  When they were discovered in 1944, the family, as Jews, were sent to a concentration camp. Anne died there in 1945. Her diary, read by millions, is noted not only for its depiction of life in hiding, but for the honesty, humanity, insight, and wisdom of an adolescent girl.

Anne Frank’s thought here is an example of the irrepressible spirit that has made her diary live on for generations.

To sin by silence, when we should protest,
Makes cowards out of men. The human race
Has climbed on protest. Had no voice been raised
Against injustice, ignorance, and lust,
The inquisition yet would serve the law,
And guillotines decide our least disputes.

The few who dare, must speak and speak again
To right the wrongs of many. Speech, thank God,
No vested power in this great day and land
Can gag or throttle. Press and voice may cry
Loud disapproval of existing ills;
May criticize oppression and condemn
The lawlessness of wealth-protecting laws
That let the children and childbearers toil
To purchase ease for idle millionaires.
—Ella Wheeler Wilcox

Wilcox was an 18th century author and poet. Much of her writing focuses on spiritualism and  morality.

Which statement pretty much sums up this excerpt from Wilcox’s poem called “Protest?”

Students collectively gain an understanding of a new monument, the artwork, the artist’s intentions, and some of the history influencing the work.

Students hear multiple voices about what feminism is, who is a feminist, and the evolution of feminism - and share their own thoughts and feelings about it.