Players Take on the NFL: Black Lives Matter in Sports

On June 4, 2020, some of the NFL’s top Black players came out with a powerful video statement demanding the NFL condemn racism and the systematic oppression of Black people. In response, Roger Godell, the league’s commissioner, published his own video admitting that the NFL erred in how it has dealt with NFL player protests of police brutality and systemic racism over the past few years.

The NFL’s new stance is in part a response to the massive wave of protests on behalf of Black Lives Matter, across the U.S. and the world, in the wake of the police murder of George Floyd. Floyd, who was killed by Minneapolis police on May 25, 2020, was the latest in a long line of Black lives taken by those whose job it is to protect and serve. But the NFL’s changing position is also the result of years of courageous activism by many groups and individuals, including famous athletes.

In this activity, students watch and discuss both videos, and consider the history of activism by Colin Kaepernick and other athletes.

For more information about the history of these protests, see the lesson plan Kaepernick & Fellow Athletes Take a Stand, from September 2016 and Athletes protest racial inequality: Exploring views, from October 2017 and  Three Allies: A Story about Standing Up, from December 2015.

Ask students to look at the following tweets and describe what they see: 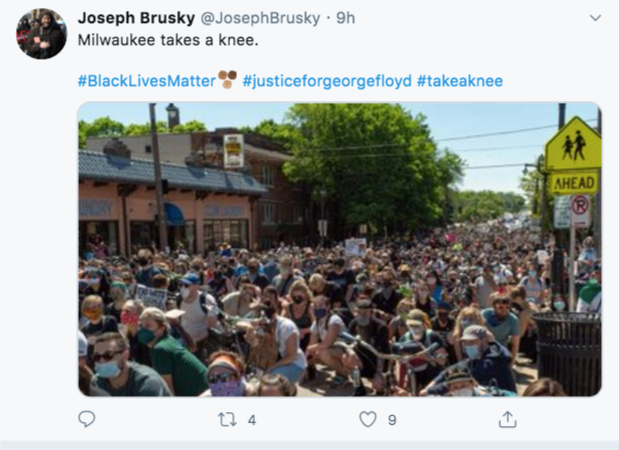 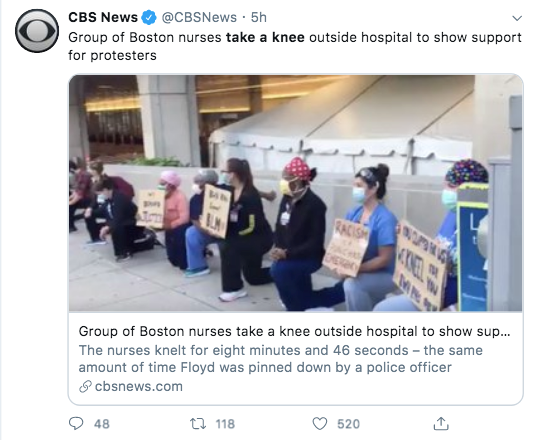 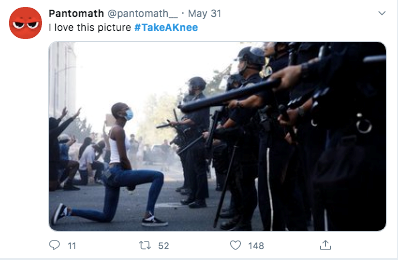 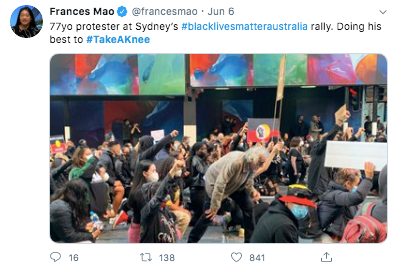 Note: If students want to focus only or primarily on the looting rather than the overwhelmingly peaceful protests, ask them why. Why do they think it’s more important to focus on the looting rather than the peaceful protests over the violence that has been perpetrated on Black, Brown, Asian and Native bodies, historically and today?  Why do they feel the need to turn their attention to looting of property and goods over ongoing and systemic violence against human beings?

Show the NFL Players Black Lives Matter video that came out on June 5, 2020. Then ask students:

In the video, the players ask: “How many times do we need to ask you to listen to your players? What will it take? For one of us to be murdered by police brutality?  It shouldn’t take this long to admit.”

In the video, the players demand a statement from the NFL admitting that it was wrong to silence its players from peacefully protesting.

NFL Commissioner Godell Responds to His Players by Video

Until now, the NFL has not supported its players in protesting police brutality and taking a stand for Black lives. Worse, they penalized players for doing so.

In June 2020, that finally appeared to change. The NFL Commissioner Roger Godell came out with a public statement a day after the players posted theirs.  In the statement, Godell condemned racism and the systematic oppression of Black people. He also admitted the NFL was wrong for not listening to NFL players earlier and encouraged all to speak out and peacefully protest. See the full Message from Commissioner Roger Godell.

In his message the Commissioner claims “we are listening, I am listening.” He also says that he’ll “be reaching out to players who have raised their voices, and others, on how we can improve and move forward for a better and more united NFL family.”

Some NFL players have been protesting for years, taking a knee in protest of police brutality against Black and Brown people, and paying a high price for it.

Ask students if they know who Colin Kaepernick is?

Elicit and explain who he is.  Either draw from, or ask students to read, the backgrounder below (and in this pdf).

In 2016, then San Francisco 49ers quarterback Colin Kaepernick tried to get the country to pay attention to police brutality and racial injustice by refusing to stand during the playing of the national anthem at the start of football games. In this way, Kaepernick, with the help of his teammate Eric Reid, started a league-wide, player-led peaceful protest.

"I am not going to stand up to show pride in a flag for a country that oppresses Black people and people of color," Kaepernick told NFL Media in an interview. "To me, this is bigger than football and it would be selfish on my part to look the other way. There are bodies in the street and people getting paid leave and getting away with murder."

Though there were those who appreciated his actions and joined him in taking a knee during the national anthem, Kaepernick also sparked outrage with his protest.  Mostly white team owners, fellow players, fans, and politicians criticized and vilified him.  Despite his thoughtfully researched peaceful protest, Kaepernick, was accused of being “unpatriotic, a traitor to the nation, a disruptive, self-aggrandizing narcissist, and a loathsome human being who disrespects the military.” There were fans who burned his jersey, and he was often booed at games, even at home.

A growing number of football players and other athletes engaged in similar silent protests that year. The wave of protests even turned into a direct form of resistance against President Trump in September of 2017 when, in a tweet, Trump called on team owners to “fire and suspend” protesting players and encouraged fans to walk out “when someone disrespects our flag.”  The NFL responded with an announcement that teams would be fined if “team and league personnel” didn’t “stand and show respect for the flag and Anthem.” The league failed to back its players in their continued attempts to raise awareness by taking a stance against police brutality and systemic racism.

In the end, Kaepernick paid a high price for taking a “stand” for what he believed in. He wasn’t drafted or signed by any of the league’s teams during the 2017 season. Many believe it was because of his protest. Ultimately, football is a business and with many of the (mostly white) fans upset by his actions, the league chose them and their money over Kaepernick’s activism on behalf of Black and Brown lives.

Kaepernick’s was not the first such protest by a professional athlete. NBA and WNBA players have publicly protested police brutality and injustice since 2014.  During the summer of 2016, entire women’s basketball teams and their owners came out in support of the Black Lives Matter movement. WNBA teams have been fined for their protests, as have individual players. WNBA President Lisa Border explained the league’s priorities this way: "We are proud of WNBA players’ engagement and passionate advocacy for non-violent solutions to difficult social issues but expect them to comply with the league’s uniform guidelines."  In this case, the league expressed pride in its players protesting police brutality and injustice, and yet it used “the league’s uniform guidelines” as a way to punish them for their actions.

Despite the price activist athletes have paid, the history of athlete protest goes back further still to Muhammad Ali, Tommie Smith, and John Carlos at the Summer Olympics in 1968 and many, many others who used the fact that they were in the public eye to shine a light on injustice.

Kaepernick and the other athletes who protested in 2016 were not acting in isolation. They were helping shine a light on grievances that the Movement for Black Lives started working on back in 2013, in the wake of George Zimmerman’s acquittal for the shooting death of Trayvon Martin.  While Kaepernick was on the national stage taking a knee, he was coordinating his efforts with other activists, who kept him informed of their objectives and strategies, so that efforts would be aligned.

While the murder of George Floyd in Minneapolis on May 25, 2020, may have triggered the most recent protests against police brutality, these protests are part of a much larger movement that has been building over the past seven years, which in turn is part of a much longer history of resistance that has been part of this country since its inception.

In 2018, Nike chose Colin Kaepernick to be one of the faces of its 30th anniversary “Just Do It” campaign. (For more on this, see The impact of Nike's Colin Kaepernick "Just Do It" ad and Kneeling, Fiercely Debated in the N.F.L., Resonates in Protests by Kurt Streeter.) 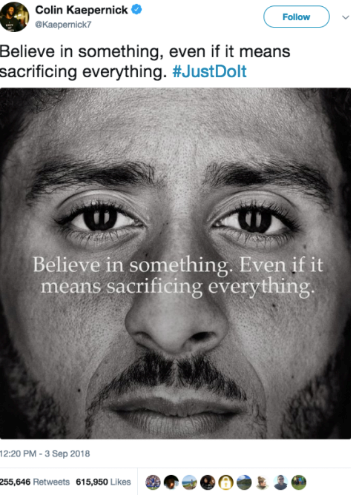 Ask students one of the following questions as a closing:

Students learn about the history and impact of Title IX and discuss the continuing struggle for gender equity in sports.

Congress has passed and President Biden has signed a new law making Juneteenth a federal holiday. Students learn about and discuss Juneteenth.

Students discuss two different visions of policing and racial justice - and consider how the thinking of one organizer and lawyer evolved over time.