3 Allies: A Story about Standing Up

Students consider what it means to be an ally and to stand up for justice by examining a famous photo of a protest  at the 1968 Olympics and then learning about and discussing the story behind the photo.

Invite students in a pair share to talk about a time they felt supported, by a friend, family member, classmate, teacher, or possibly a stranger.  What did this person do or say that was supportive?  Invite a few students to share out with the full group.

Circle format:  If you are using a circle format for this activity, consider using the following opening ceremony from the song Stand by Me by Ben E. King:

Next send a talking piece around asking students to talk about a time they had someone "stand by them,"  a time they felt supported by a friend, family member, classmate, teacher, or possibly a stranger.  What did this person do or say that was supportive?

Invite students to free associate with the word ally.  Chart what students share in a web:  Write the word ALLY in the center of the board, circle it and write student associations around the circled word.  Draw lines from these associations to the circled word to create a web.  Consider grouping words that are connected in some way, e.g. feelings words, words that are connected to bullying, the kind of things that allies do or say, etc.

Circle format: If you are using a circle format, consider sending the word ALLY around the circle to elicit associations in the following way:  Turn to the student next to you and say ALLY, inviting him/her to respond with whatever word first comes to mind.  This student then turns to his/her neighbor saying ALLY and inviting the neighbor to respond with the first thing that comes to their mind.  In this way the word ALLY continues around the circle, eliciting associations from all students.  Either chart these associations in a web as described above or have the students write their associations on index cards and contribute them to the center piece for all to see.

At the end of the activity, invite students to come up with a definition of ally.  According to dictionary.com an ally is: 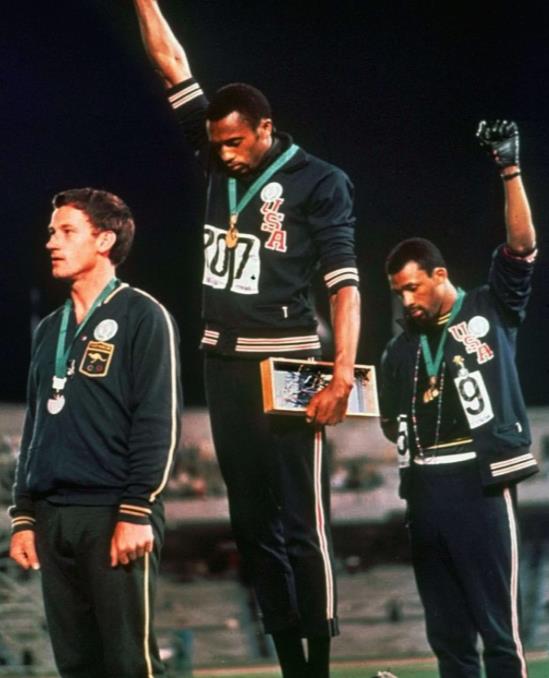 Ask students to look at the picture above and describe what they see. Instruct them to describe only what is actually in the image. If students draw any conclusions or make any interpretations, redirect them to what can actually be seen.

Students might share that they see three men. Two have their fists raised above their heads.  One has his arms by his side.  The two who are raising their arms and fists have a darker skin color than the third man, and they are looking down while the third man is looking straight ahead.  All three men are wearing similar black outfits and have ribbons with metal objects around their necks.  The two darker skinned men have USA on their jackets, the other does not. They all have a round white badge on the left hand side of their jackets. The background is blurry. They are standing at different heights, etc.

Try to have students share as complete a description of the image as they can, by asking, every time someone shares, what else students notice. Ask them to compare and contrast the two men on the right of the photo with the man on the left. How are they different? How are they the same?

Now ask students to move beyond the mere description of the image. Ask: If you were to use adjectives to describe this image, what might they be?  Why?  What feelings does the image bring up for you?

Step 3: Moving Beyond the Image

Ask students if they know what the image is of. Are they familiar with what happened here? If not, have them guess what the image might be of. What might be going on here? Ask them to explain why they would think that.

The Story Behind the Image

Ask students to read the handout below. Discuss the article using some or all of the following questions:

In a documentary written, directed and produced by his nephew Matt, Peter Norman described the reasons for what he did on that podium in 1968:

I couldn’t see why a black man couldn’t drink the same water from a water fountain, take the same bus or go to the same school as a white man.  There was a social injustice that I couldn’t do anything about from where I was, but I certainly hated it.  It has been said that sharing my silver medal with that incident on the victory dais detracted from my performance. On the contrary.  I have to confess, I was rather proud to be part of it.

Read the quote by Norman out loud.  Then ask students if there is anything they learned from today’s lesson.  Alternatively ask them to share, one thing they’ll start, stop or keep doing as a result of today’s lesson.

The Story Behind the Image

The photo we just viewed and discussed was taken at the 1968 Summer Olympics in Mexico City.  The image is of three men who won gold, silver and bronze medals in the 200 meters.  It is a famous image in which two African Americans, John Carlos and Tommie "the Jet" Smith, stood shoeless on the podium, heads bowed, their black gloved fists in the air as the U.S. national anthem sounded through the stadium.

The symbolism of this moment had been carefully planned.  They went shoeless, wearing black socks, to represent the poverty facing people of color in the U.S.  Smith wore a black scarf and Carlos a bead necklace in memory of African Americans who had been lynched, and both raised their fists in a gesture Carlos said was meant to represent "power to the people." They wore the Olympic Project for Human Rights badge, a movement of athletes supporting equality for all.

Carlos was a founding member of the Olympic Project for Human Rights, and originally advocated a boycott of the 1968 Olympic Games unless four conditions were met: withdrawal of (then-apartheid) South Africa and Rhodesia from the games, restoration of Muhammad Ali's world heavyweight boxing title, the resignation of International Olympics Committee (IOC) president Avery Brundage, and the hiring of more African-American assistant coaches. The IOC withdrew its invitations for South Africa and Rhodesia, but the other conditions were not met. Carlos and Smith decided that they would participate in the Olympics, but would stage a protest if they won.  When they came in, in first and third place, they did exactly that.

Immediately after their protest, IOC president Brundage ordered Smith and Carlos suspended from the U.S. team and banned from the Olympic Village. Back home they faced further threats and repercussions, but with time things changed and they were seen for what they were: champions of the Civil Rights Movement.  Their courage was memorialized in this statue erected at San Jose State University. 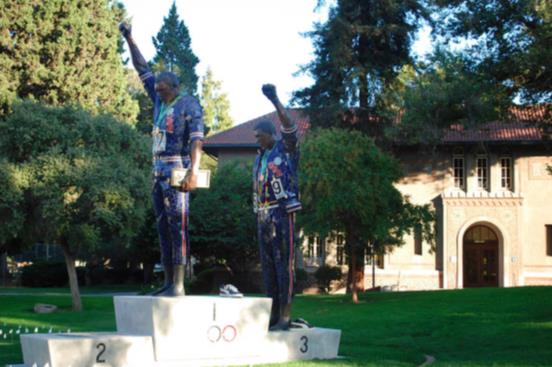 As we look at the first, famous picture, it is no wonder that our eyes are immediately drawn to Carlos and Smith making their powerful statement.  And yet the third man in this picture, often forgotten -- and left out entirely in the San Jose memorial -- was more than a footnote in the story of this brave protest.

In the photo, this third man stands looking straight ahead, by the side of the other two athletes. On close inspection, we can see that he is wearing the same badge as Carlos and Smith - the badge of the Olympic Project for Human Rights.  It turns out there is more of a connection between these three men than may be apparent at first sight.

The third man in the picture was an Australian named Peter Norman. He had come in second that day with a personal best and Australian record that still stands today, 47 years later. Only Smith beat him, in world record time. The race was memorable, but the awards ceremony that followed even more so.

Before the games, word had spread in the Olympic village that Smith and Carlos were planning a protest if they won medals. They approached Norman to talk with him about their plan. John Carlos remembers Peter Norman saying, "I’ll stand with you." Recalled Carlos: "I expected to see fear in Norman’s eyes, but instead we saw love."

Norman was from a country with strict apartheid laws, which he was vehemently against. He was happy to support these two men in their fight for equality.  They planned the awards ceremony together, with Norman wearing the Olympic Project for Human Rights badge.  "That way I can show my support for your cause," he said.

Unlike Smith and Carlos, Norman was not immediately suspended from the Olympic team.  However, he was barred from the team four years later, even though he ran qualifying times for the 200 and 100 meter races.  Peter Norman and his family were ostracized in a country that continued to promote racist laws and segregation.  As a result, he had a hard time finding work. But when he was invited to condemn the actions of Smith and Carlos at the 1968 games, which would have made life for himself and his family much easier, he refused. According to Carlos: "If we were getting beat up, Peter was facing an entire country and suffering alone."

In 2006, Norman died of a heart attack.  At the funeral Tommie Smith and John Carlos, who had been friends with him since that day in 1968, were his pallbearers. (See a photo here.)

John Carlos believes Peter Norman's story should not be forgotten. In stories about the 1968 protest, he said, "They write Peter out on purpose so white athletes don’t have him as a hero or an example." "Peter was a lone soldier," said Carlos. "He consciously chose to be a sacrificial lamb in the name of human rights. There’s no one more than him that Australia should honor, recognize and appreciate," John Carlos said. "He paid the price with his choice," added Tommie Smith, "It wasn’t just a simple gesture to help us, it was his fight. He was a white man, a white Australian man among two men of color, standing up in the moment of victory, all in the name of the same thing."

It wasn’t until after his death in 2012 that the Australian Parliament formally apologized to Peter Norman, rewriting him into history with this statement:

This House "recognizes the extraordinary athletic achievements of the late Peter Norman, who won the silver medal in the 200 meters sprint running event at the 1968 Mexico City Olympics, in a time of 20.06 seconds, which still stands as the Australian record."

"Acknowledges the bravery of Peter Norman in donning an Olympic Project for Human Rights badge on the podium, in solidarity with African-American athletes Tommie Smith and John Carlos, who gave the ‘black power’ salute."

"Apologizes to Peter Norman for the wrong done by Australia in failing to send him to the 1972 Munich Olympics, despite repeatedly qualifying; and belatedly recognizes the powerful role that Peter Norman played in furthering racial equality."

In honor of Black History Month, consider these lessons on everything from the story of Black farmers to the history of voter suppression.

Black history isn't just for February. Here, some perspectives on teaching Black history - and suggested activities for any time of the year.

Students deepen their knowledge of the civil rights icon and listen to and share their thoughts and reflections.