This classroom activity helps build community in your classroom at the start of the school year, and encourages students to reflect on some of the big issues in the news over the summer. It can be a stand-alone circle, or it can be used to jumpstart a longer term project in advisory, social studies, humanities, or history on one of these issues.

Note to the Teacher

The following activity includes a gathering to build community in your classroom at the start of the school year and a reflection on some of the big issues in the news over the summer (issues include controversies over the Confederate flag, the 2016 election, the crisis in Greece, the Iran deal, climate catastrophes, and more). It can be a stand-alone circle, or it can be used to jumpstart a longer term project in advisory, social studies, humanities, or history on one of these issues.  For more information on the circle process, see this introduction. For guidelines on how to conduct a class project on an issue, see Teaching Social Responsibility.

Invite students to stand up in a circle. Bring a ball of yarn to the circle, and tell students that to begin today’s activity, we’ll be using the yarn to weave a web together.  Explain that in this activity, each of us will share a story about our name.

Tell students that the story they tell can be about their first, middle and/or last name, or about a nickname. The story might focus on any one of these questions:

If students don’t know much about the story behind their name, they can tell a story in response to questions such as:

Explain that students can use any of these approaches to telling the story of their name.  If students have several stories to share, ask them to pick just one or two.

Next, as the keeper of the circle, model a story using your own name. This will help set the tone and give students some time to think about the story they will share.

Once you have shared the story of your name, you might need to give students another minute or so to think about the story they will tell about their name. Then explain that you’ll start weaving the web as follows:

You will hold on to the end of the string, then toss the ball of yarn to someone else in the group, inviting him/her to share the story of their name.  After sharing, this student will hold on to a piece of the yarn before tossing the ball on to yet another student, who will share the story of his/her name.  As the ball of yarn is tossed from one student to the next, a web is created, physically connecting the members of the group.

Once everyone has received the ball (once only) and shared their story, examine the web that the class has created. Explain that community can be defined as a group of people who recognize their interconnectedness and who share certain values. The web symbolizes what we'll be working toward in our advisory or classroom community this year:  The yarn represents the connections and relationships that will make up our community.

Next, ask students to make sure the yarn is not sagging by taking a step back, if needed. Then tug on the web in different places so that students can physically feel the interconnectedness you’ve described.  Ask students if they can feel your tugs at the web.

These reverberations symbolize the relationships and connections in a community.  Note that each of us belongs to several different communities. Based on the stories that students have shared about their names, we come from a variety of family, ethnic, national, religious and/or other communities.

Point out that this class, and your school, is a diverse community made up of, and connected to, all the other communities we belong to.  As you tug on the web, note that when things happen in the communities we are a part of, there are likely to be reverberations in all our other communities, including the school or this class. And if something happens to one person in a community, there will be reverberations across the community. We're all affected; we’re all touched in some way.

You may be able to draw on events that happened at your school last year that illustrate such reverberations.

Project the image below on the board. (The image can be found here.) 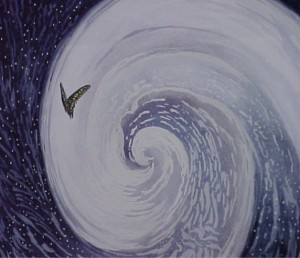 Ask students if they have ever heard of the "butterfly effect." If they have, ask them to share what they know.  If not, or if their knowledge is incomplete, use the following to inform them further:

The "butterfly effect" refers to the notion that the flapping of a butterfly’s wings can cause a tornado.  The idea is often ascribed to Edward Lorenz, who was a mathematician and meteorologist at the Massachusetts Institute of Technology.  In a December 1972 meeting of the American Association for the Advancement of Science in Washington, D.C., Lorenz presented his theory in a talk entitled: "Predictability: Does the Flap of a Butterfly’s Wings in Brazil set off a Tornado in Texas?"

Lorenz’s observation was that a seemingly insignificant event - like the flapping of a butterfly’s wings - can create a minute change in the initial condition of the atmosphere, which could cause a chain of events that could ultimately lead to much larger phenomena.  Had the butterfly not flapped its wings, the atmospheric change that caused the tornado may not have taken place either.

Explain that we’ll be using the concepts of interconnectivity and the butterfly effect to explore issues affecting communities around the world, as well as our own community.

If your class or advisory has already created a set of community agreement (a set of guidelines everyone agrees on for relating with each other in the class), review them briefly.  If you do not have such an agreement, consider doing that before continuing with today's activity.

Tell students that not only are we interconnected as people, we are connected to other animals and the whole natural environment.  All our actions have consequences both on each other and on the environment. The word "ubuntu" is used by the Bantu people of southern Africa to help explain this interconnection. The word literally means "human-ness." More broadly, it refers to a belief in a universal bond of sharing that connects all humanity - the idea that each of us is fundamentally a part of the whole. It suggests that "I am because we are."

But this concept isn’t just a social idea - it is affirmed by quantum physics, which points to the profound interconnectness of the universe. The physical world is an inseparable whole, and each action has consequences that reverberate throughout.

Sheldon Berman, founder of Educators for Social Responsibility, defined a community as "a group of people who acknowledge their interconnectedness, have a sense of their common purpose, respect their differences, share in group decision-making as well as in responsibility for the actions of the group, and support each other's growth."

Tell students that we’ll now explore some things that have happened in the world over the summer - and think about how they affect us.

If you are planning to use this process to launch a project this year, explain that in our class or advisory community this fall, we’ll be working together to pick an issue facing our community or communities today, explore a variety of perspectives about that issue, and consider how this issue ripples through other communities, including our own.  (For suggestions on how to conduct such a project, see Teaching Social Responsibility.)

Print up a selection of the tweets included in this PDF document, and post them around the room. Explain that these are tweets about stories in the news this summer that affected our community/ies in some way.

Invite students to walk around the room in silence, reading the various tweets.  Ask them to decide on a tweet that stands out for them, that resonates with them for whatever reason.

Next, ask students to return to their seat in the circle. Send the talking piece around, asking students to share the tweet they picked and explain why they picked it.  What do they know about this news story?

After everyone has had a chance to share, send the talking piece around a few more times, asking some or all of the following questions:

In closing the activity, note that just as a butterfly flapping its wings may not seem to have a huge effect on our lives, a debt crisis in Greece (mentioned in one of the tweets) may not feel like it’s connected to what’s happening to us here in the U.S.; the confederate flag coming down in South Carolina may not appear to have an impact on our day-to-day lives either; nor does a monsoon in Asia.

Ask students to consider how some of these changes elsewhere in their ripple ultimately touch all of us.  Explain that we’ll be exploring some of those connections in coming together in class this year.

Closing: One Word Check Out (1 min)

Ask students to think about what large ripples happening around the world today are affecting our school and classroom/advisory communities. Then ask: What kind of ripples can we as individuals create that will have a positive impact on everyone in our community and on those beyond our immediate circles? 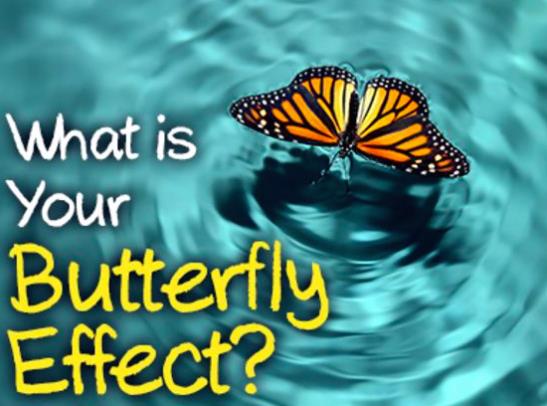 As a new school year begins, Paloma, a fifth-grade star goalie, is feeling sad and anxious. She tries ignoring her feelings, but as they start to show at school, her classmates single her out.  Will Paloma find the strength to share her secret? This video read-aloud of the book Paloma's Secret can open up important conversations with our young ones.

Use this chart and process to check in with students on how they're feeling and what they need throughout the school day.

Here are some online games that can help you and your students get to know each other better, cooperate, and build empathy and connection.