Students learn about protests in Hong Kong (the "Umbrella Revolution") and analyze the different forms of civil disobedience protesters have used to organize for their cause.

On July 1, 1997, after 150 years of British rule, Hong Kong was returned to Chinese control.  In the words of Evan Osnos of the New Yorker, "the Communist Party rejoiced at recovering the jewel of the Crown Colonies, a tiny archipelago ... with more Rolls Royces per capita than anywhere else in the world and a film industry that had produced more movies each year than Hollywood."

The transfer of Hong Kong sovereignty to China (referred to as the "the handover" by the international community and "the return" in China) was based on an agreement between the UK and China on what has come to be known as "one country, two systems." Hong Kong, as part of communist China, would be allowed to retain its free-market economy; a legal system with an independent judiciary; and greater civil liberties for its citizens than for residents of mainland China.  There was reason to believe that China would uphold the agreement in part because both Britain and the US offered themselves up as guarantors, and also because China was hoping to replicate Hong Kong's vibrant economy on the mainland.  That faith has been tested in recent months.

As part of the handover, China also promised free elections for Hong Kong's chief executive in 2017.

But in August 2014, China's legislature announced that any candidate for the post of Hong Kong's chief executive had to first get majority support from a 1,200-person nominating panel that many believe is made up of mostly Beijing government loyalists.  China has also been clear that to be eligible for the position of chief executive a candidate must "love country" (mainland China) and "love Hong Kong."

In response to this announcement, tens thousands of people have taken to the streets of Hong Kong to push for universal suffrage. They are against Beijing's plan to vet candidates for elections in Hong Kong.  But according to the Economist, "the protesters' grievances stem from more than a lack of democracy.  Many young people in Hong Kong are dissatisfied with the economy, and see a system rigged against them by the territory's wealthy tycoons. They also resent the creeping influence of the mainland over a place they feel is special. Educated mainlanders take jobs sought by Hong Kong graduates. Hong Kong's media often shy away from criticism of the party. ... "

In the following lesson or lessons, students learn more about the Hong Kong protests (sometimes called the "Umbrella Revolution") and analyze the different forms of civil disobedience protesters have used to peacefully organize for their cause. 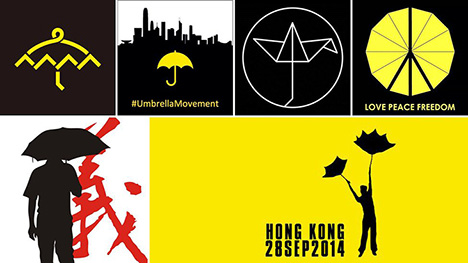 Ask them whether they know what these images are in reference to.

Which do they believe is the most powerful?   Why?

If you don't have ways to project or hand out these images, simply ask students if they've heard of "Occupy Central with Love and Peace" also dubbed "The Umbrella Revolution."  If so, what have they heard?  What do these terms refer to?

The images above were among those submitted in response to a call by Hong Kong artist Kacey Wong for designs for the Hong Kong movement, which is also known as the  "Umbrella revolution."  The artwork is by (L-R) Sunny Yuen, Carol Chan, Andrew Wong, Lily Cheung, Chun Man and Angelo Costadimas.   (From http://www.bbc.com/news/world-asia-china-29407067)

Provide some background about the UK's handover of Hong Kong to China in 1997, the conditions of the handover, and the Chinese government's plan to vet candidates for Hong Kong chief executive.   The protests were sparked by this plan, which protesters view as a threat to democracy in Hong Kong.  Young people have played a major role in the protests.  Read students the following quote from The Economist:

... the protesters' grievances stem from more than a lack of democracy. Many young people in Hong Kong are dissatisfied with the economy, and see a system rigged against them by the territory's wealthy tycoons. They also resent the creeping influence of the mainland over a place they feel is special. Educated mainlanders take jobs sought by Hong Kong graduates. Hong Kong's media often shy away from criticism of the party. ...

Occupy Central's leaders, who teach at local universities, wondered whether they could muster meaningful numbers. Then came the students, both from universities and schools, thousands of whom began boycotting classes on September 22nd. On the evening of September 26th the police inflamed their passions by arresting Joshua Wong, the 17-year-old leader of a movement called Scholarism, which two years ago led successful protests against an effort to introduce party-backed "patriotic" teaching in schools. Mr Wong was released on September 28th, but in the early hours of that day Benny Tai, one of the leaders of Occupy Central, announced that its protest, which had been scheduled for October 1st, would begin immediately.

Hong Kong citizens have always wondered if China would honor the full agreement made with the UK at the time of the handover and the Chinese government's August 31 announcement has helped fuel the recent protests.  However, the protests were not spontaneous, as some news organizations have claimed.  Occupy Central started its fight back in March 2013 to put pressure on China to allow for free and fair elections in Hong Kong.   They have been preparing for years, hoping to preempt a future crisis as the 2017 elections for Hong Kong's chief executive get closer.

Split your class into groups of four or five.  Provide each student with Handout 1: Introduction to Nonviolent Resistance.  Ask them to read it, then discuss the reading in their small groups, using the questions at the end of the handout.

Next, give each group a piece of chart paper and markers. Then invite some small groups to read Handout 2: Hong Kong Protesters say Peaceful Resistance is Key.

Ask each small group to discuss the questions at the end of their reading.  As they talk, each group should list on the chart paper the different nonviolent methods they are discussing.

Afterwards, have students post their charts around the room.  Then have a "gallery walk" in which all students quietly walk around the classroom to take in what their classmates have posted about the nonviolent methods being used in Hong Kong.

Then bring the students back to the large group to discuss:

Ask three volunteers to read the three quotes that follow, from the Independent, the Huffington Post and Reuters news organization:

(Independent) Hong Kong is now a tinderbox. It was the brutal attempt to disperse a small demonstration ... that brought the masses onto the streets in the first place. Heavy-handed efforts to clear the roads could provoke a second surge.

(Huffington Post) China is clearly concerned with Occupy Central, and has allegedly employed hackers and Beijing loyalists to infiltrate the movement. Going forward, how China handles the demands and actions of Occupy Central may, to a large degree, determine the future of the movement. If China uses repression against people who are committed to nonviolent struggle it may face significant repercussions. .... China's capacity to apply punishment may inspire a greater number of supporters for the Occupy Central movement, cause fissures and fracturing within the Communist Party and its local supporters, and build sympathy and support among third parties in the international community.

(Reuters) Thousands of protesters regrouped in central Hong Kong on Friday to push their demand for democracy, a day after the government called off talks with students amid a two-week standoff that has shaken communist China's capitalist hub.  The political crisis has seen tens of thousands take to the city streets to push for free elections and seek the resignation of Hong Kong leader Leung Chun-ying.  Scores arrived with tents, suggesting they were in for the long haul despite a call by police to remove obstacles that have blocked major roads in and out of the financial centre, causing traffic and commuter chaos with tail-backs stretching for miles.

If possible, show this BBC video clip about the renewed show of force that the student leaders have called for.  As they watch the clip ask students to pay attention to:

1. What they see in the clip with regard to discipline and organization

2. What they hear the reporter say about:

Have another look at the images from the gathering.  Ask students: Now that you know more about the movement and about its methods, have you changed your mind about which you consider to be most powerful?  Why?

According to Gene Sharp, who has been called the father of nonviolent struggle, there is an entire arsenal of "nonviolent weapons" that practitioners of nonviolent struggle have available to them.  In his The Methods of Nonviolent Action, (published in Boston in 1973) he lists 198 of them, classified into three broad categories:

Still, Sharp argues that every struggle is unique and needs to find its own nonviolent weapons according to the adversary that is faced and the context within which the struggle is waged.

For homework, ask students to use Gene Sharp's list (Handout 4) as a lens through which to follow the events in Hong Kong.  As they recognize different methods being used in Hong Kong, invite students to check them off on the list below.  If they notice methods being used that are not on the list, write them down.  In your next class come together to assess where the movement is at, what methods are being used, and what students think about the methods used.

On June 16, 1976, young people in South Africa mobilized a powerful protest against the apartheid regime's education policies. The Soweto Uprising became an epic fight that contributed to the end of apartheid. In this activity, students learn about the Soweto Uprising as well as two recent U.S. youth-led movements that are fighting injustice, Dream Defenders and March for Our Lives.

Are protesters justified in confronting political officials while they are eating out at restaurants or engaging in other personal activities? After reading about three such protests, students consider the arguments for and against such tactics.