On June 16, 1976, young people in South Africa mobilized a powerful protest against the apartheid regime's education policies. The Soweto Uprising became an epic fight that contributed to the end of apartheid. In this activity, students learn about the Soweto Uprising as well as two recent U.S. youth-led movements that are fighting injustice, Dream Defenders and March for Our Lives.

On June 16, South Africans, and people around the world, will mark the anniversary of the Soweto Uprising, a 1976 student-led rebellion that had a profound impact on the movement to overthrow apartheid in South Africa. June 16 is Youth Day in South Africa, a national holiday commemorating the courage displayed by students who stood against the apartheid government.

This two-part lesson explores the essential question, “How do oppressed people fight back against injustice and oppression?” In Part 1 of the lesson, students learn about the Soweto Uprising through video and discussion.  In Part 2, students examine two recent youth-led social justice organizations in the United States: Dream Defenders and March for Our Lives, and relate them to the anti-apartheid youth movement.

Note:  This lesson explores a powerful protest that also resulted in the deaths of hundreds of young protesters. Before beginning the lesson, consider how students may react and how to ensure a supportive classroom climate for the discussion. You may want to review these guidelines for discussing upsetting issues. 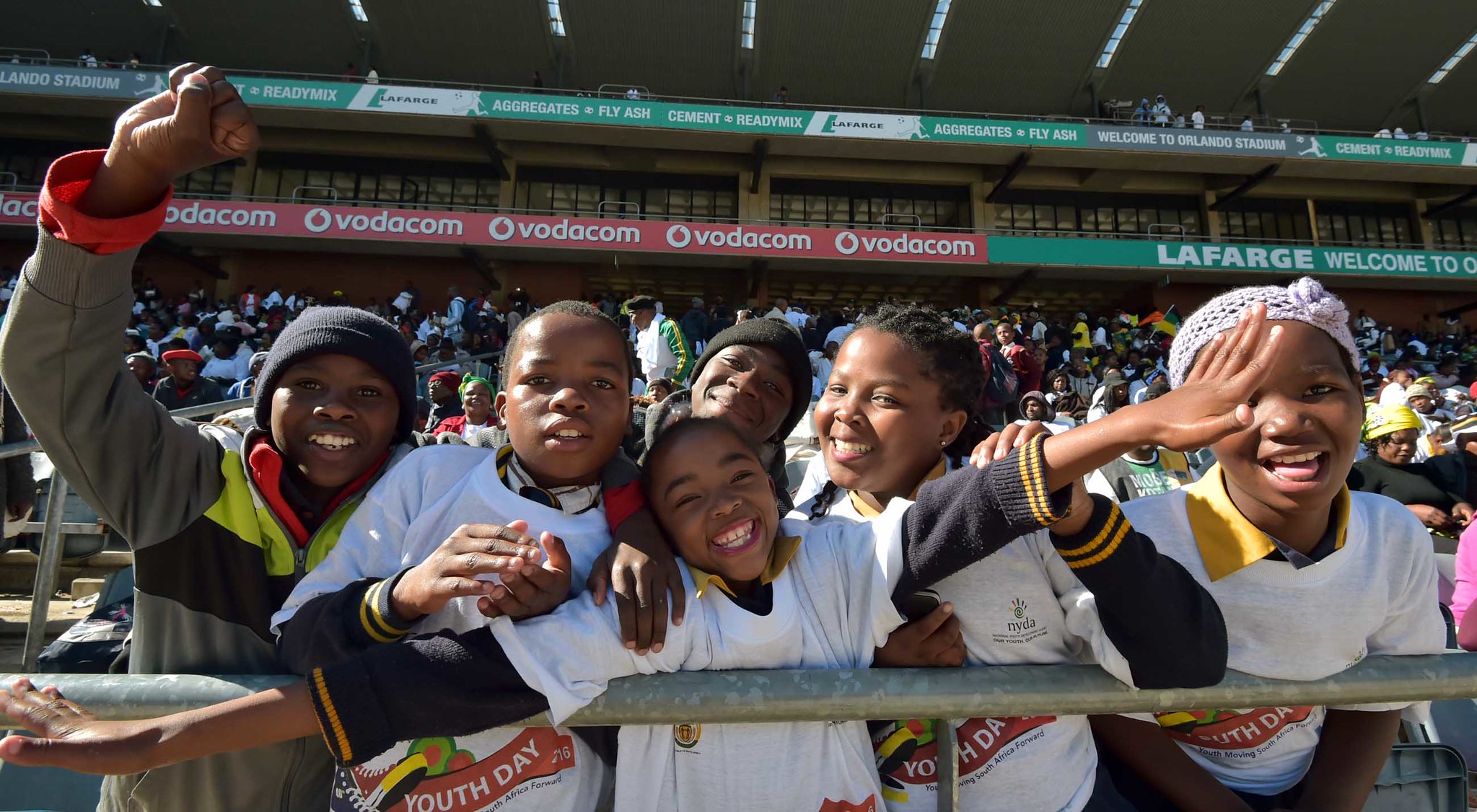 PART ONE: The Soweto Uprising

Background Information for the Teacher

The Black South African challenge to apartheid and the student-led Soweto Uprising offer powerful examples of how oppressed people can fight back against their oppressors.

Though South Africa had been an oppressive, racist government since its inception, apartheid, an Afrikaans word meaning “separateness,” was adopted as official policy in 1948. In this predominantly Black country, Black South Africans couldn’t vote or own property and were forced to live in isolated, impoverished rural communities or shantytowns surrounding major cities. Blacks also were required to carry a passbook that designated where they could live and work.

In 1953, a law called the Bantu Education Act codified into the law the separate and unequal educational system for Blacks that had also already been in existence. Under the Act, the curriculum in Black schools was designed to keep Black students in their place of assumed inferiority and get them ready for menial, low-wage labor.

The man known as the architect of apartheid, Hendrik Verwoerd, stated:

“The Natives will be taught from childhood to realize that equality with
Europeans is not for them. There is no place for the Bantu child above the
level of certain forms of labor."

For students already learning in segregated, poorly-funded schools under the harsh apartheid regime that marginalized and, at times, murdered Blacks, that was the tipping point.

Many students decided they could no longer stand for the injustices of the South African educational system. The Soweto Uprising of 1976 is one of the best known events in the struggle against apartheid.

On June 16, 1976, an estimated twenty thousand students in Soweto, a township of the city of Johannesburg, left their schools and marched in peaceful protest of their educational system. (Emphasize to students that in the months of organizing and preparing for their march it was always organized to be a peaceful protest.)

When police arrived, they began shooting students who would not disperse when ordered. Nevertheless, during the next 10 days, students and parents continued to protest. The official death toll rose to 176, with two whites and 174 Blacks counted dead. Actual deaths, however, were significantly higher. According to the government-appointed Cillie Commission of Inquiry, 575 people died; police action resulted in 451 deaths; 3,907 people were injured; and the police were responsible for 2,389 injuries. Both the death and inquiry figures were disputed by various sources as being too low. The number of people arrested for offenses related to the resistance was said to be 5,980.

Within four months of the Soweto revolt, 160 African communities all over the country were involved in resistance. It was estimated that at least 250,000 people in Soweto were actively involved in the resistance, and 1,298 people were arrested for offenses ranging from attending illegal meetings, arson to terrorism and furthering the aims of banned organizations.

In the early 1990s, after nearly two decades of continued struggle, apartheid ended in South Africa. Nelson Mandela, the nation’s first Black president, was elected in 1994.

Ask students to list all they know about segregation in the United States during the Jim Crow era. During this period, both laws and customs oppressed, disenfranchised, and economically disadvantaged African Americans and other people of color and gave unfair advantages to whites.

After they’ve compiled their list, spend a minute explaining that many of the same legal restrictions existed in South Africa since its founding in 1910. For decades, Black South Africans worked to change things.

Announce to students that during the next school year, they’ll be required to learn all of their lessons in Russian or some other language that none or few of your students speak. Ask students for their reactions.

Students are likely to express outrage and disbelief. (One of my students even said the same thing that South Africans students did in 1975: “We’re gonna fail!”) After a minute or less of “student protest,” quickly let them know that of course they won’t be required to learn in Russian. But in 1975 in South Africa, this was real for Black students!

Play one of the video or audio clips listed below.

Next, break the class into small groups and have students lead a discussion on how students organize to dismantle oppression using the discussion prompts below (17 – 19 minutes)

Prompts for either of the Tsietsi Mashinini videos:

Reconvene the entire class and have students report back. Ask:

In this activity, students learn about two recent U.S. campaigns for justice led by young people. After researching these groups and their goals, students will discuss these organizing efforts in light of what they have learned about the Soweto Uprising and the youth movement against apartheid.

Background Information for the Teacher

Dream Defenders is an organization that was founded by young activists who marched together to protest the killing of Trayvon Martin. Trayvon Martin, 17, was shot by George Zimmerman in Sanford, Florida on February 26, 2012.

On July 16, 2012, three days after Zimmerman was acquitted in the shooting, the Dream Defenders streamed into the governor’s suite to hold a sit-in and to demand changes to Florida’s self-defense laws – specifically the Stand Your Ground provision.  The Dream Defenders were protesting the way students of color were treated in the state’s schools as well as its streets. They vowed to stay until a special legislative session was called on their issues.

They weren’t able to convince Gov. Rick Scott to call a special session on the controversial Stand Your Ground self-defense law. They did, however, draw national attention to their cause by holding one of the longest sit-in demonstrations ever in the Florida Capitol. They ended the sit-in after 31 days, at which time House Speaker, Will Weatherford, agreed to speak with them about the Stand Your Ground Law.

The March for Our Lives movement began shortly after the mass shooting at Marjory Stoneman Douglas High School in Parkland, Florida on February 14, 2018. Student survivors decided to stage a rally in Washington, D.C., on March 24, a little more than a month after the tragedy. It was the largest march ever against gun violence, and one of the largest protests in U.S. history.

The march and subsequent March for Our Lives organizing not only called for gun control and an end to gun violence but also protested police brutality, domestic abuse, and advocated for LGBTQ rights. The movement also mobilized for youth participation in the 2018 elections and in the political process in general.

Next, give a brief history of both movements based on how much students do or don’t know about each group.

The Dream Defenders group will tab onto the “Freedom Papers” section of the website. The group will break into subgroups of 3-4, with each subgroup examining two of the seven “Freedoms” the Dream Defenders espouse as part of their platform. Students will then discuss what they’ve read using the following discussion prompts:

The March for Our Lives group will click on the Policy Agenda tab. The group will break into subgroups of 3-4, with each subgroup assigned to examine two of the ten policy agenda items. Students will then discuss what they’ve read using the following discussion prompts:

Reconvene the class to discuss both movements, and relate them to our previous exploration of the Soweto Uprising.

Ask students to share one thing they will take away from today’s discussion.

Are protesters justified in confronting political officials while they are eating out at restaurants or engaging in other personal activities? After reading about three such protests, students consider the arguments for and against such tactics.

In this activity, students discuss widespread protests by NFL and other athletes against racial injustice, consider tweets for and against these protests, and discuss how one group of high school athletes decided to act.