A Circle on Events in Ferguson

In this circle activity, students share their thoughts and feelings about events in Ferguson and reflect on a quote about protest from Martin Luther King Jr.

Current Issues
This classroom activity was developed by Brett Schneider, Marieke van Woerkom, and Tala Manassah. It is structured as a circle.  For more information on circles, see this introduction. 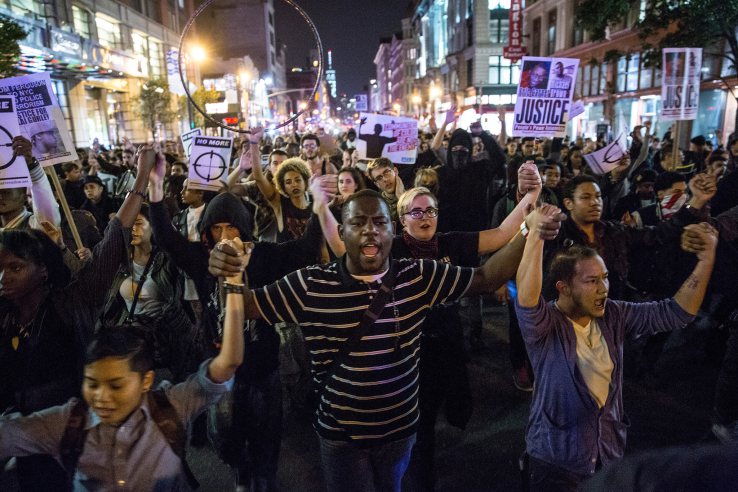 Project the image above on a smart board or having printed it up and placed it in your center piece, send the talking piece around, inviting students to respond to the following questions:

Elicit and explain that that the image is of protesters responding to the news that a grand jury would not indict the white police officer who shot and killed unarmed black teenager Michael Brown over the summer.

Explain that the quote you're about to read was written by Dr. Martin Luther King in his now famous "Letter from a Birmingham Jail." It addresses the media and public's response to protests during the Civil Rights Movement in 1963.  Present the quote to students either by projecting it on the smart board, writing it on the board or by using handouts.  Ask a volunteer to read it out loud and consider talking students through it to make sure everyone understands:
You deplore the demonstrations taking place in Birmingham. But your statement, I am sorry to say, fails to express a similar concern for the conditions that brought about the demonstrations. I am sure that none of you would want to rest content with the superficial kind of social analysis that deals merely with effects and does not grapple with underlying causes. It is unfortunate that demonstrations are taking place in Birmingham, but it is even more unfortunate that the city's white power structure left the Negro community with no alternative.
As the protests and discussions about Ferguson continue over the coming period, keep this quote in the back of your mind. Encourage students to follow the news to see how people "grapple with the underlying causes" of the shooting death of Michael Brown.

If your students are up to it, consider having 4.5 minutes of silence, which Michael Brown's family requested:
After the Grand Jury's decision, we are asking for 4 1/2 minutes of silence to remember why we lift our voices. We are not here to be violent. We are here in memory of our son. We are here for protection of all children. We are here to support justice and equality for all people. We lift our voices to ensure black and brown men, women, and children can live in this country without being devalued because of the color of our skin.
Explain that the 4.5 minutes symbolizes the 4.5 hours Michael Brown's body was left in the street after he was shot to death.

Students deepen their knowledge of the civil rights icon and listen to and share their thoughts and reflections.

Does "freedom of speech" extend to hate speech? Is countering hate a form of free speech? Students explore current controversies over free speech rights, including at schools and colleges.

Did the Civil Rights Movement only involve the South? Was it the product of a few great leaders? In this lesson, students deepen their understanding of the civil rights movement, explore some mythologies surrounding it, and consider how sometimes "history" distorts the truth.