Francis Perkins would not agree to become FDR's secretary of labor until he met nine bold demands.

Show students the picture below. You might ask if anyone wants to hazard a guess about what this woman’s job is.  What is she doing? 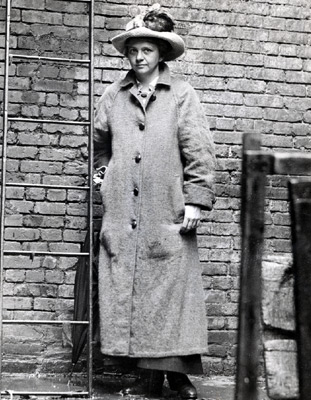 This woman is investigating a deadly fire.  Her name is Frances Perkins, the year is 1911, and she is standing at the site of the Triangle Shirtwaist Factory in Greenwich Village in New York City.  On March 25, 1911, a fire at the factory killed 146 garment workers - mostly young immigrant women. Many jumped out the windows of the building to their deaths because the employer had locked the doors.

Frances Perkins led a team of investigators who uncovered the extreme employer negligence that led to the fire and the deaths.  The investigation eventually led New York State to adopt the most comprehensive workplace health and safety law in the nation at that time.

Perkins  said she would not take the job unless her conditions were met: She was only interested in being labor secretary if Roosevelt would back her up on all of the policies she intended to fight for.  They were:

Roosevelt said he endorsed them all. So Perkins took the job, becoming the first woman cabinet member in U.S. history. Roosevelt subsequently got a lot of hate mail from people saying a woman could not do this important job.

Perkins was one of only two cabinet members to stay the entire length of  Roosevelt’s presidency. By the end of those 12 years, Frances Perkins with the help of many thousands of activists and organizations across the countrysucceeded in winning all her demands except one, universal health insurance.

Toward the end of her life, Perkins said: "There is much to be done ...It is up to you to contribute some small part to a program of human betterment for all time."

Ask students to name one change THEY would demand if they were in Frances Perkins' position today.  Give students a minute or two to think about it, and then have students respond in a go-round.