Verizon Strike and a Union Primer

A major strike by workers at Verizon offers a teachable moment: Why do people join unions? Why do they strike? And why are they now striking Verizon?

In this headline, what does the word "union" mean? (Those who have studied for standardized tests may already be familiar with this type of question.)

Answer: b) That was easy, but a lot of people don't really know what unions are.

Read the information below, or ask a student to read it.

A Short History of Unions & Strikes

For as long as some people have worked for other people, there has been conflict over pay and working conditions. To improve his or her lot, the worker would have to approach the owner and request an improvement. It was up to the employer to decide.  For most of time, the only option for a dissatisfied employee was to quit (if they could) and try to find a better job. 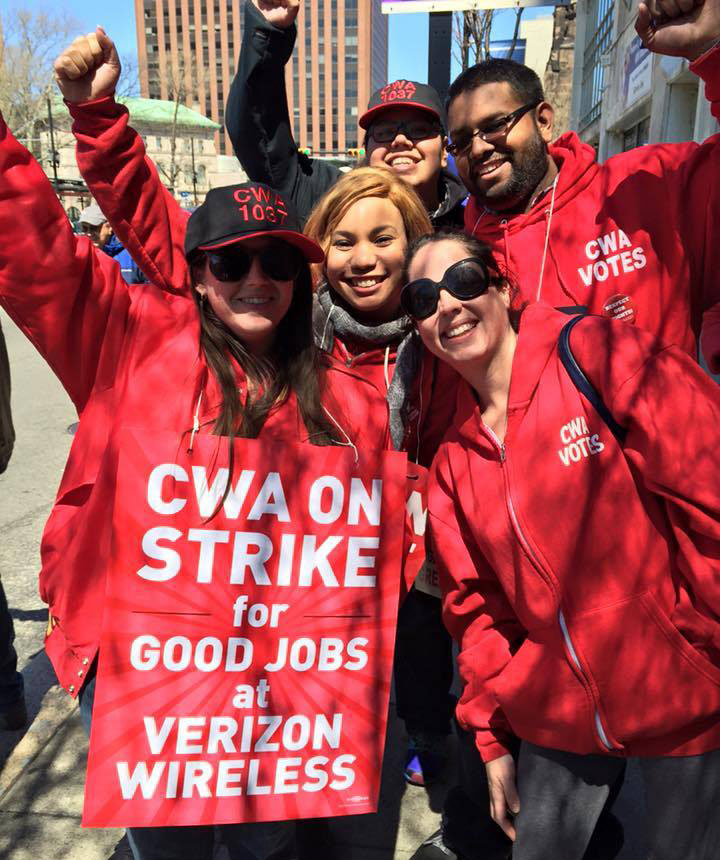 In the 19th century as cities grew and the size of businesses grew, people began to address their grievances as groups rather than individuals. Working conditions were poor:

Behind all bargaining lies the power of the bargaining parties. It turned out that bargaining as a group was very different than bargaining as a single person. Employers had to wonder what would happen to the business if all the workers were to stop working. As the worker groups became more popular and formed permanent structures, unions shifted the power balance—more in some industries and regions than in others.

What success the unions had was in large part the ability to threaten to (or actually) stop work—in other words, call a strike. In the twentieth century, unions grew, formed alliances and became legal. It was not an easy process. Many people were fired, jailed or lost their lives in the struggle for labor rights.

By the 1950s about a third of all workers belonged to unions. Today, the percentage is about 11%. There are a lot of reasons for the decline and scholars are not unanimous in determining which factors are most important:

1. The overall rate of unionization is 11%. What percent of private sector (non-governmental) employees are in unions?

As union membership has declined, so has the number of strikes. The US Bureau of Labor Statistics counted 12 major (involving more than 1000 workers) strikes in 2015 for a total of 47,000 workers.  By contrast, in 1974 there were 424 strikes involving 1.8 million workers.

Read the following, or ask a student to read it.

On April 13, 2016, about 40,000 Verizon workers from two unions went on strike. Their last contract (agreement between the union and management) ended in August 2015, and they've been working without a contract since then.

One big issue for the workers is that Verizon wants a new rule that will allow them to send Verizon technicians on the road for up to two months at a time. According to the wife of one striker, "I will tell you what it is like to be married to someone who works for Verizon. His schedule is so erratic. You can never plan anything. He works from 7:30 am till whenever..."

For the unions other issues include:

Both the company and the unions are making their case for public support. For its part, the company says they are offering a fair pay increase and are willing to involve a mediator. They see their wireless operations (which are mostly non-union) as representing the future of the industry and are anxious to reduce costs for the (mostly unionized) landline telephone and cable operations.

The workers point out that the company is extremely profitable, with billions of dollars in profits each year. And they note that the top five executives at Verizon receive a total of more than $47 million a year in compensation.

Workers are hoping that the rising concern about stagnating wages, disappearing middle class and rising wealth inequality will encourage consumers and others to put pressure on the company, media and government to address their concerns. The strikers argue that by standing up against a corporate giant, they are standing up for all workers, and they've invited supporters to join them on their picketlines. (A picketline is a line or gathering of striking workers and their allies, usually outside the place they are striking.)

(For a view of how workers see the strike and scenes from the picketlines, see this 2.5-minute video produced by one of the striking unions, Communications Workers of America District 1.)

1. According to the Economic Policy Institute think tank:  "To a remarkable extent, the level of inequality—which fell during the New Deal but has risen dramatically since the late 1970s—corresponds to the rise and fall of unionization in the United States." Do you see a possible link between the drop in union membership and the rapid rise in income inequality? Why or why not?

2. The federal and state governments have at different times taken steps to make it easier or harder to form unions. What do you think the government role should be in labor relations?

3. Other than joining unions, what ways do workers have to better their pay and conditions—especially when their employers are resistant?

4. The Fight for 15 campaign for a higher minimum wage has raised the profile of minimum wage workers who often have poor working conditions and no unions. Do you think we will soon see workers at McDonalds and Subway unionize?

5.  Do you think that by standing up to Verizon, the strikers are helping all workers? Why or why not?

Photo: Stand Up to Verizon