Students discuss recent cases of forced sterilization, explore the history of this horrific practice, then do some research of their own.

Note:  This lesson explores controversial and disturbing aspects of American history. Before you begin the lesson, consider how students may react and how you can ensure a supportive classroom climate for the group discussion. You may want to review these guidelines on teaching about controversial or difficult issues.

For more background on this subject, see the articles below, as well as the sources listing at the end of this lesson. 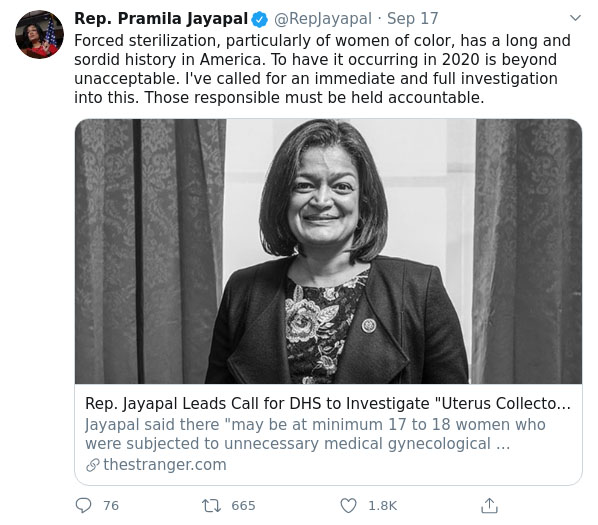 In September 2020, Dawn Wooten, a Georgia nurse, filed a whistleblower complaint alleging that immigrant women detained at the Irwin Country Detention Center in Ocilla, Georgia, were receiving a high number of hysterectomies. (A hysterectomy removes a woman’s uterus, preventing her from having a child.)

House immigration subcommittee member Rep. Pramila Jayapal later spoke with an attorney representing the women, who said that approximately 18 women at the center had been subjected to unnecessary gynecological procedures they didn’t consent to. Rep. Jayapal sent a letter to the Department of Homeland Security, signed by 173 other members of Congress, requesting an investigation of what had happened at the facility.

In June 2019, the  University of Vermont issued an apology for the forced sterilizations that resulted from the Vermont Eugenics Survey program it operated, in conjunction with the State of Vermont, from 1925 to 1936.The university now offers an online database detailing the history of the eugenics movement in all 50 states.

A Short History of Eugenics and Forced Sterilization

Share with students these 12 slides, which provide historical context on eugenics.

Read the slides with students, and discuss any questions that surface.

Note: Slide number 10 discusses the case of Elaine Riddick, a North Carolina woman who, as a teenager, was raped and impregnated and, after birthing her son, was forcibly sterilized. It includes a link to a 4-minute videotaped statement by Riddick about her experience. Consider playing the video for students and inviting their responses.

The video is here: https://www.youtube.com/watch?v=cFJNX5bHYVI

Next, ask students to work in pairs to find out more about the history of the eugenics movement by delving into the University of Vermont’s database detailing this history in all 50 states. (Students may choose a state, or assign states for students to research.)

After they’ve read the information, ask each pair of students to discuss the following questions:

Next, reconvene students as a group and discuss the United States’ history of forced sterilizations.

If students are interested in exploring this issue further, or want to take action on it, invite them to research the organizations that are working to ensure reproductive justice. Some of them are listed below.

Ask students to share one thing that surprised them in their research or in the discussions.

“Sterilization Operations Performed in California Mental Hospitals and Institutions for Mental Defectives, to June 30, 1941,” in the Statistical Report of the Department of Institutions of the State of California (Sacramento: California State Printing Office, 1941):

Effects of Eugenic Sterilization As Practiced In California: A 1920s source document distributed by the Human Betterment Foundation in Pasadena, CA
https://www.ncbi.nlm.nih.gov/pmc/articles/PMC1449330/figure/f1/?report=objectonly

Students use signs from the protests following the Supreme Court’s landmark Dobbs ruling as a taking off place for discussion and dialogue on the overturning of Roe v. Wade.

Students learn about and reflect on the life and values of the activist and thinker Archbishop Desmond Tutu, who died on December 26, 2021.