What can we do to make college affordable and reduce student debt? With a quiz, reading and discussion, students consider statistics, stories, and some proposals from 2020 presidential candidates.

We are hearing more and more about the student debt “crisis” facing college graduates.  Ask students to share what they’ve heard about the crisis.

A quick look at the numbers helps explain why so many politicians, economists, and think tanks see student debt as a critical issue not just for students, but for the larger economy. Share some of the statistics with students: 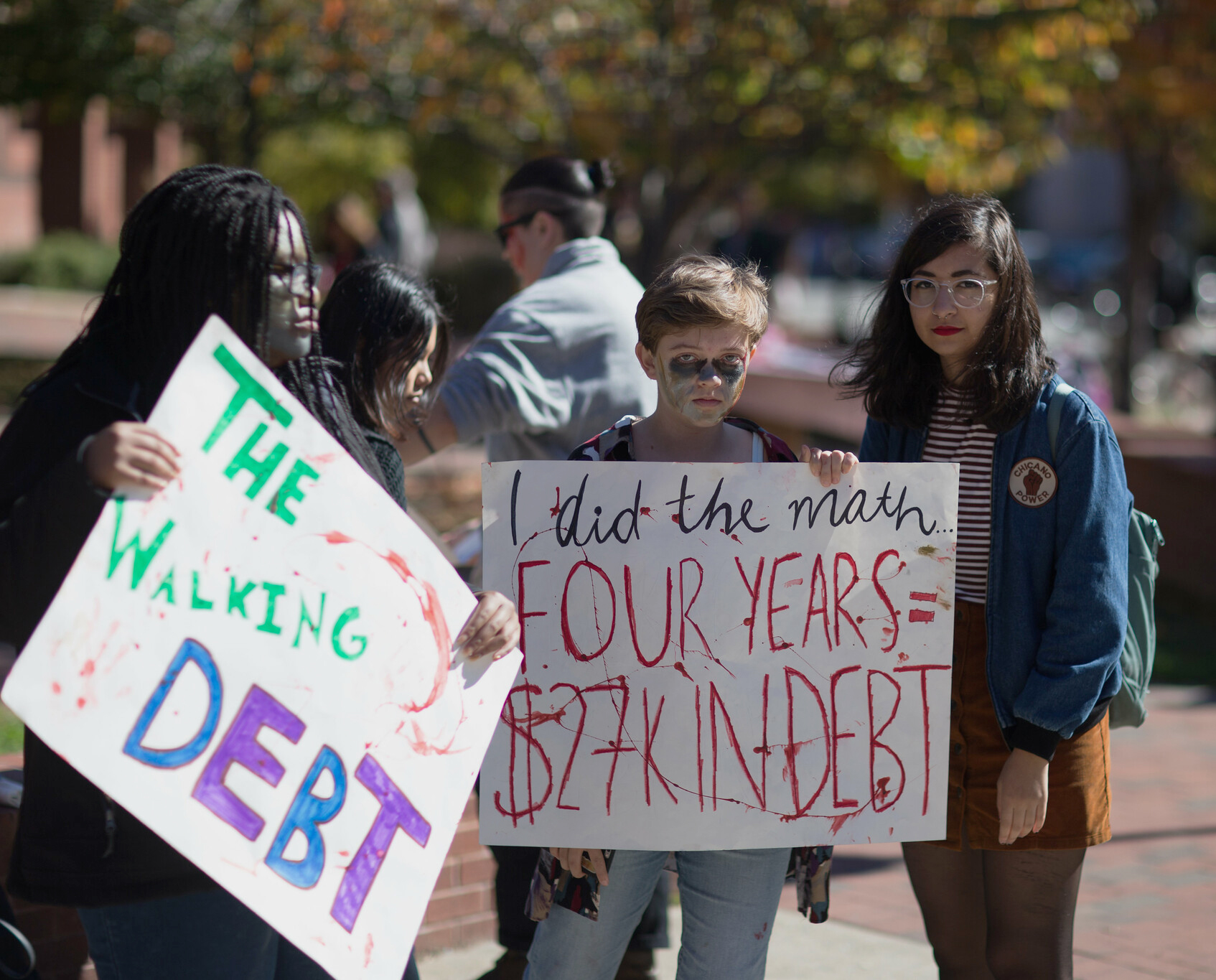 Ask students their responses to the following.

1. Until around 1970,  the Universities of California, Florida and New York City were tuition- free.

2. In 1965, the average tuition at public colleges and universities was how much?

Reading:
The Student Debt Problem – and Some Possible Solutions

The statistics on tuition and debt don’t tell the whole story.

On May 2, 2019, the New York Times reported on a Temple University survey of students in 100 colleges. The survey that found 45 percent of students had faced food insecurity in the past month. One student said she’d had to take out a $5000 loan in her senior year. She was working two jobs, living in a homeless shelter, and budgeting fifteen dollars a week for food. Another had to move back home and use a food-sharing app to get by.

As the crisis gained public recognition and discussion, both government agencies and private organizations launched new efforts to help students in particular schools and districts attend college. Many of these programs restrict eligibility by need, merit, and locale. For instance:

In 2015, President Obama noted the Tennessee and Chicago programs in his State of the Union Address and proposed a federal effort to assist states in making 2-year colleges free. Meanwhile hundreds of college “Promise” programs, funded by private donors, have sprung up to provide free college to students living in particular towns and cities. (For a database of all Promise programs, see https://www.ahead-penn.org/creating-knowledge/college-promise).

In 2016, a major contender for the presidency of the United States made the cost of college a major issue. Senator Bernie Sanders proposed a plan that would make all public colleges tuition-free. The Democratic candidates—Sanders,  Hillary Clinton, and Martin O’Malley—all  offered ideas to ease the burden of debt for graduates. After Clinton won the nomination, she adopted some of Bernie Sanders’ plan, proposing to eliminate  tuition (for public colleges) for families with incomes under $85,000.

After the election of President Trump, the momentum toward college affordability slowed, as the new administration has not made student debt or tuition a priority.

Now that the 2020 presidential campaign has begun, the Sanders proposals, which seemed radical to some in 2016, have gained varying degrees of acceptance among the Democratic candidates. Most of the candidates have made proposals or taken positions on bills before Congress. Some of these proposals aim to reduce debt. Others go to the root of the problem—the high cost of going to college. Here are fixes candidates have proposed:

Sanders’ 2017 College for All Act would make public colleges and universities tuition-free by subsidizing two-thirds of college tuition, with the states providing the remaining third. Under the Act, students from families making less than $125,000 per year would qualify for free tuition. The funding would also require schools to meet some conditions, such as reducing their reliance on low-paid adjunct faculty. The colleges would not be able to use the money to raise administration salaries or build new stadiums.

Rival candidates Senators Elizabeth Warren, Kirsten Gillibrand, and Kamala Harris have co-sponsored the bill. The program would be paid for by imposing a tax on stock market transactions.

Elizabeth Warren’s plan goes further. In addition to eliminating tuition and fees for public colleges, her plan would:

Senator Warren’s plan would be paid for by a tax on the very wealthiest families in America.

The other Democratic contenders have announced positions for or against free tuition, or offered some minor changes. Senators Cory Booker and Kirsten Gillibrand have offered alternatives. Gillibrand’s idea is to provide students with up to two years of free tuition for each year of pre-college community service. Booker’s plan would create a “baby bond” fund at birth, which would be used later for college (or to make a down payment on a house).

The other set of proposals focus on reducing debt rather than reducing the cost of college.

Virtually all of the Democratic contenders agree that there are aspects of the current rules that are flat out unfair. For example, unlike home mortgage loans or car loans, student loans cannot be refinanced to obtain a lower rate of interest. So if loan rates decline, college borrowers cannot take advantage of the lower rates. This can amount to thousands of dollars potentially saved over the course of the loan. Another unique disadvantage to student borrowers concerns bankruptcy. Bankruptcy, as in the game of Monopoly, is available to borrowers who get over their heads in debt. A judge has the power to “discharge” some or all of a person’s debts, in order to give them a new start. But in 1998, Congress passed a law making it nearly impossible for student loans to be counted in bankruptcy proceedings.

Though the candidates agree on some of the basic fixes for student debt, each has contributed a few variations on the theme:

The high cost of college and high levels of debt obviously impact each student’s choices, career, and life. But the college debt crisis also impacts the society and the economy as a whole. If families cannot afford to send their children to college, entire categories of high-paying jobs are closed to those students and likely the children’s children as well—hampering a primary avenue for upward mobility.

Students of color are disproportionately affected. Because of our nation’s long history of racism, including housing discrimination and wage inequality, white households have nearly 6.5 times the wealth of black households, on average. This makes it extra hard for many Black families to cover the rising cost of college. As we saw in the recent college admissions scandal, very often wealth, or the lack of wealth, determines who gets a quality education.  A wide range of structural barriers to mobility perpetuate the race and class inequalities that plague our country.  (Despite all this, the percentage of American college students who are Latino, Asian/Pacific Islander, and Black has been increasing.)

When students are prevented from advancing their education,  we all lose the advantage of having those engineers, musicians, leaders, and teachers reaching their full potential.

Completely aside from any issue of fairness is the lag on the economy that goes along with the enormous student debt. The $1.5 trillion dollars that students owe would otherwise be spent on goods and services that stimulate the economy and create jobs. The 2020 election may determine whether students and the overall economy get a break.

Ask students to share one thing that they will take away from the discussion today.

Ask students to write a brief essay arguing for a specific policy they would like to see that would address the college debt crisis.