#MeToo: It's About Power

Through tweets, readings, and small-group discussion, students grapple with the #MeToo movement, and how it relates to the power -or lack of power - of women.

This activity uses tweets, readings, and small-group discussion to help students grapple with the #MeToo movement, and how it relates to the power - or lack of power - of women. Use the background information below to inform your discussion.

In 2017, millions of women around the world broke their silence about sexual misconduct, harassment, and assault in their lives; the year when at least some of their voices were finally heard and acknowledged in what became known as the #MeToo movement.

It started in October of that year, when actress Alyssa Milano took the suggestion of a friend of a friend and tweeted: "If you've been sexually harassed or assaulted write 'me too' as a reply to this tweet." Following her appeal, the #MeToo hashtag was tweeted nearly a million times in 48 hours.

#MeToo opened up a global floodgate. The movement gained in power and visibility as women used the hashtag to broadcast their stories or simply acknowledge that they too had experienced sexual harassment or assault. Powerful men were exposed and several were made to pay a long overdue price for their misconduct.

In December, Time Magazine recognized "the Silence Breakers" as Person of the Year for 2017. Through the #MeToo movement, women had demonstrated that there is power in numbers. They pushed back on a culture that has condoned and perpetuated sexism and misogyny since time immemorial; a culture that has intimidated and silenced them, allowing the abuse to continue and thrive.

Activist Tarana Burke watched things unfold with some trepidation.  Her original "Me, Too" campaign, launched a decade earlier, had sought to support survivors of sexual violence who were poor, marginalized, underrepresented and invisible - mostly young  women of color without communities to support and protect them.

Burke wondered: Why were we hearing so few stories from low-income women of color through the #MeToo movement?  "Initially I panicked," Burke said. "I felt a sense of dread, because something that was part of my life's work was going to be co-opted and taken from me and used for a purpose that I hadn't originally intended."  That's when a friend told her to insert herself into the conversation.  So, says Burke, "I posted a video to Twitter about how empathy can help survivors of sexual assault. It went viral in a way that was like, 'We won't let this black woman be erased from her work.'"

Milano said she hadn't known about Burke when she first sent her tweet. She has since credited Burke publicly and reached out to her, looking to collaborate. "What the Me Too campaign really does, and what Tarana Burke has really enabled us to do, is put the focus back on the victims," Milano said in an interview on Good Morning America.

On The Today Show, the two women appeared together.  Burke shared: "This is just the start. I've been saying from the beginning it's not just a moment, it's a movement.... Now the work really begins." And Milano added:  "As women, we have to support each other and stand together and say, 'That's it. We're done. No more.' ... It's vital to me that we really set in some actionable things that we can do to continue this momentum."

Gathering:  Me Too Tweets 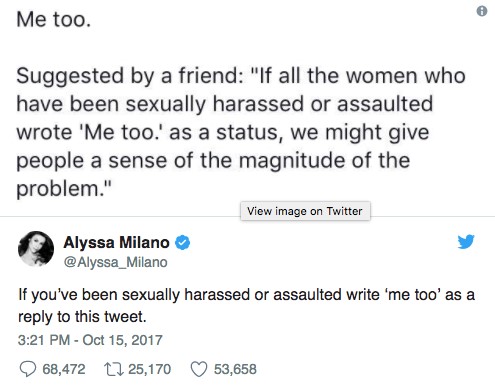 Summarize what students share and add information from the background information above as needed.  Make sure to touch on the fact that activist Tarana Burke's original "Me Too" campaign, launched in 2007, sought to support survivors of sexual violence who were poor, marginalized, underrepresented and invisible; mostly young women of color.  When #MeToo went viral in 2017, Burke wondered about their voices: where were their stories in all this?

For more information about the origins of #MeToo, see founder Tamara Burke's article, The Inception.

Ask students to break into small groups. Invite students in each group to read the four segments in this handout (which are also included at the end of this lesson) about the relationship between sexual misconduct and power.  After each segment, allow time for students to discuss the questions below the segments.

At the end of the reading and small-group discussion, bring the groups back together to process what was discussed.

Show students the tweet below, or read it out loud.

Handout: It's About Power

Women are all too often singled out for sexual harassment in the workplace. A 2015 study of workplace harassment in Australia found that women filed nine out of 10 workplace harassment complaints, as just one example.  Because of sexism, women are seen as sexual objects; as Andrea Dworkin wrote, women "are treated as if we are subhuman, and that is a precondition for violence against us."

Sexual harassment is also the direct result of patriarchy—a system in which men hold the majority of the power, and in which masculinity is glorified. In patriarchy, masculinity and power are bound together.... Men usually signal and assert power in patriarchy by sexually dominating and humiliating women. But they can also signal power by sexually humiliating men—particularly men of color, gay men, and young men. ... Sexual abuse, then, is not about sexual attraction or gratification; it's an assertion of, and an abuse of, power.

"What it's really about is work, and women's equality in the workplace, and more broadly, about the rot at the core of our power structures that makes it harder for women to do work because the whole thing is tipped toward men.  Sexual assault is one symptom of that imbalance, but it is not the only one.

The tales ... about rape and assault have been told by accusers who first interacted with these men in hopes of finding professional opportunity, who were looking not for flirtation or dates, but for work. And they have reported — they have taken care to clearly lay out — the impact of the sexual violence not just on their emotional well-being, not just on their bodies, but on their careers, on their place in the public sphere."

"While the media has paid the most attention to the unlawful behavior of high-profile harassers like politicians, actors, and executives, sexual harassment is even more prevalent for women in the largely invisible low-wage sector of the economy. Women ... [make up] two-thirds of all low wage-workers.... They have fewer resources to access legal help when faced with... discrimination, are less financially able to leave an abusive workplace, and in some cases their immigration status may create a powerful deterrent to reporting.

In industries with a strong gender hierarchy, ... harassment is widely accepted as part of the work culture. Many women in low-income jobs risk more than psychological trauma to say "Me too." They also risk fundamental security for themselves and their families....

Federal law prohibits retaliation for opposing sex discrimination, ... but these laws ... act as a deterrent only to the degree that harassers know their targets might actually be able to use them.  Even the most robust ... [law] is useless to the employee who does not know it exists, lacks the means to bring a complaint under it or who cannot afford ... the retaliation, including unemployment for the time it takes to undergo the process."

"[There are] abuses in myriad working class industries as well as some solutions. Hotel workers in Chicago ... have pioneered a "Hands Off, Pants On" campaign to combat rampant sexual harassment and assault by hotel guests; their demands ... [secured] access to panic buttons for anyone working alone. [Organized restaurant workers] ... have mounted a campaign called "One Fair Wage" to eliminate the low minimum wage for tipped workers, which forces waitresses to overlook harassment from patrons and managers in order to ensure that they'll be paid decently. The Coalition of Immokalee Workers in Florida has built language against sexual harassment and assault into its hard-won contracts and has actually managed to get abusive managers fired. These are struggles that we can learn from, and they must be expanded.

One way for them to grow: by channeling the largely unfocused female solidarity demonstrated at the marches earlier this year into concrete collective action.

High-profile women should [also] get behind the campaigns of those less famous, to make #OneFairWage the next phase of #MeToo. And journalists should dig into the pervasive problem of sexual abuse, which working women have fought for decades without acknowledgment."

Students discuss recent cases of forced sterilization, explore the history of this horrific practice, then do some research of their own.

2018 is the 50th anniversary of a landmark protest at the Miss America beauty pageant. The protest was part of a new period of feminist activism—one with renewed significance in the #MeToo era. In this lesson, students learn the details of the protest using an original document and explore how the protest affected the women's liberation movement and our lives since the decades since.

Students learn about the term "intersectionality," and consider what role it played in the 2017 and 2018 Women's Marches.