This lesson considers various statements by President Trump about immigration, and invites students to examine the facts on both sides.

You may also want to  remind students to listen to and respect any personal experiences with immigration that classmates choose to share.

Explain that students will have the opportunity to examine facts related to these four quotes.

Print out this pdf, which includes four readings exploring each of these quotes, and place the readings in each corner of the room. (The readings are also included below.) Divide students into groups or invite them to choose the quote they most wish to examine. Each reading is followed by a set of questions for students to discuss.

As each group discusses the questions, listen to students’ reactions and encourage them to examine possible assumptions behind the data on all sides. If there is time, invite students to choose a second quote and discuss with a new group.

Sit in a circle and pass around a talking piece, inviting students to discuss this question or pass as they wish:

“In addition to winning the Electoral College in a landslide, I won the popular vote if you deduct the millions of people who voted illegally”

Trump’s assertion was based on assertions by groups such as the Virginia Voters Alliance. VVA’s 2016 report, "Alien Invasion in Virginia," found that in eight Virginia counties with high immigrant populations, 1,046 noncitizens had been removed from the voter rolls for not being citizens, totaling 0.0007 of the population of those 8 counties. A total of 31 of those removed had previously voted in an election. VVA and other groups argue that because people can register to vote by checking a box on their driver’s license application, millions of noncitizens must currently be registered to vote, but have just not yet been caught. (Voter registration information received by state motor vehicle offices is turned over to the local board of elections for verification and processing.) VVA believes that the accuracy of our elections is at stake if noncitizens vote.

In response, the Brennan Center for Justice released a report, "Noncitizen Voting: The Missing Millions," arguing that “noncitizen voting in the 2016 election was exceedingly rare” since “both the number of people referred for prosecution and the number of people merely suspected of improper voting are very small.” An election official in Georgia explained that sometimes noncitizens who are completing a driver’s license application don’t realize that they’re checking a box that is registering them to vote. Those who have made this mistake “will come and self-report and explain their accident. Then we give them a conﬁrmation in writing that they have been removed and take them oﬀ the rolls.”

The Brennan Center report states that sometimes citizens are wrongfully removed from voter rolls. “One way for people to get out of jury duty is they can say they’re a noncitizen,” explained one Texas election official. Others might forget to mark the “citizen” box when filling out a driver’s license form, which can lead to being removed from the voter rolls.

Voting by noncitizens is a felony, and even one vote by a noncitizen can lead to deportation. An election officer in Arizona stated, “Voter apathy is an issue for citizens in this country. To think that someone who is here trying to stay under the radar would put their name on an oﬃcial list and get out to vote in elections and expose themselves, with so much at risk, doesn’t make sense.”

“It is the Democrats fault for being weak and ineffective with Boarder [sic] Security and Crime. Tell them to start thinking about the people devastated by Crime coming from illegal immigration. Change the laws!”

A few days later after this tweet, President Trump held a press conference with grieving family members of those killed by undocumented immigrants. “These are the American citizens permanently separated from their loved ones,” he said. “These are the families the media ignores. They don’t talk about them. Very unfair.” He continued, “Where is the outcry over the savage gang MS-13 and its bloodthirsty creed: kill, rape and control?”

Three months before the tweet, an article in the journal Criminology, “Does Undocumented Immigration Increase Violent Crime?” used an analysis of crime data from the past 25 years to argue that “undocumented immigration does not increase violence.” In fact, the researchers conclude that over that time, “increases in the undocumented immigrant population within states are associated with significant decreases in the prevalence of violence.”

Furthermore, according to a report from Immigration and Customs Enforcement (ICE), although the gang MS-13 originated in El Salvador, in the U.S., most MS-13 members are U.S. citizens. When ICE arrested MS-13 members nationwide in May 2017, 85% were U.S> citizens, and a similar raid in 2016 found 78 percent of gang members were U.S. citizens. According to ProPublica, “the vast majority of MS-13 victims are young immigrants, many of them undocumented.” For example, the six teenage victims of MS-13 profiled in a 2017 NY Post article were all either immigrants or children of immigrants.

Immigrants and the Economy

“Protecting our workers means reforming our system of legal immigration. The current, outdated system depresses wages for our poorest workers, and puts great pressure on taxpayers... It is a basic principle that those seeking to enter a country ought to be able to support themselves financially. Yet, in America, we do not enforce this rule, straining the very public resources that our poorest citizens rely upon. According to the National Academy of Sciences, our current immigration system costs America’s taxpayers many billions of dollars a year.”

President Trump, in a speech to Congress on February 28, 2017

The other way immigration can affect the economy is through paying taxes and receiving government services. The report states that immigration increases the cost of public education in the short-term, since immigrants’ children tend to be more costly to educate. However, the report continues that “as adults, the children of immigrants (the second generation) are among the strongest economic and fiscal contributors in the U.S. population, contributing more in taxes than either their parents or the rest of the native-born population.” According to the report, immigration costs governments 57 billion annually for the first generation of immigrants, but second generations contribute 31 billion a year, and third-plus generations add 224 billion annually. The report concludes that “immigration has an overall positive impact on long-run economic growth in the U.S.”

Nevertheless, a 2017 poll of the general public found that 41% of Americans think immigrants make the tax situation “worse,” while only 23% said “better” and 33% said there was no effect.

“The security of the United States is imperiled by a drastic surge of illegal activity on the southern border.” 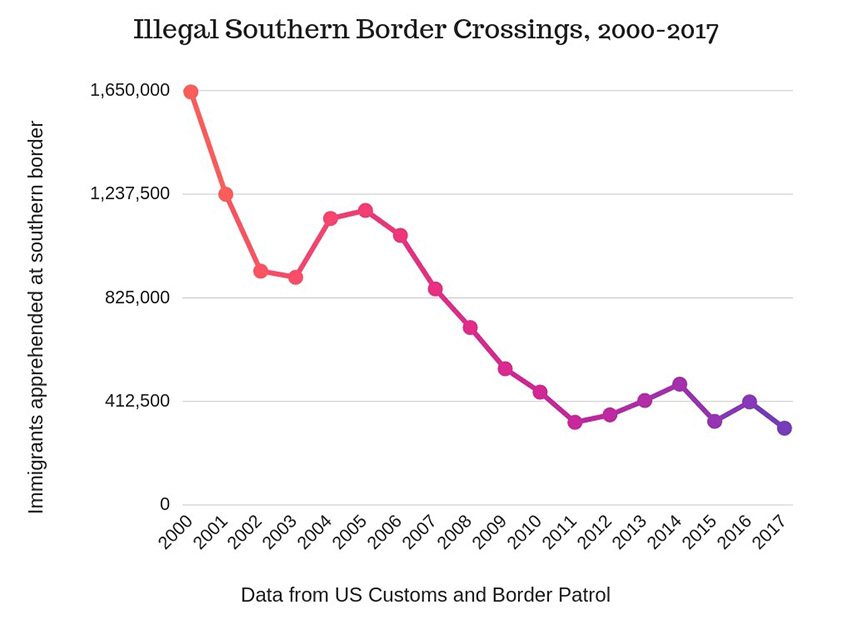 According to the U.S. Customs and Border Patrol, however, the rate of people illegally crossing the border is far lower now than in past years.

By contrast, today a system of quotas by country, dating back to 1924, heavily restricts U.S. immigration. As a result, the waiting list for visas is decades-long, even for people who are being sponsored by a family member. For example, people immigrating from Mexico must wait over 20 years for a family sponsorship visa, according to the State Department’s visa advisory. Thus, while total immigration nowadays is similar to what it was in the late 19th century, legal immigration remains much slower and more difficult now than it used to be.