Ebola in Africa: Fostering Empathy in an Interconnected World

In small and large group reading and discussion, students consider the U.S. response to Ebola and the need to develop a sense of our interconnectness and responsibility to each other in the face of such global challenges. Extension activities include a video, slideshow, and additional readings.

Share one thing that has stood out for you about reporting on the Ebola outbreak since a Liberian man infected with the disease died in Dallas.

If you did the earlier lesson plan on Ebola, consider asking instead:

Share one thing that has stood out for you about Ebola reporting since we last met to talk about the outbreak of the disease.

[The panic that followed the announcement of the first confirmed case of Ebola in the U.S.] is understandable but unnecessary. Ebola has a worryingly high mortality rate, and its spread in West Africa, most notably in Liberia, Sierra Leone and Guinea, has been unprecedented, but for a person to contract Ebola, they need direct contact with an infected person's blood, vomit or feces during the contagious period. The U.S. healthcare system is well-prepared to isolate and treat the infected person before they have a chance to infect others, limiting the risk of a large-scale outbreak.

In an ideal world, America's Ebola panic will come with a silver lining: a recognition that Ebola is a truly global problem, and protecting the health of Americans will probably start by saving the lives of thousands of people in West Africa.

Ask students to read quietly by themselves, the following excerpt from the Huffington Post.  Then in small groups discuss the questions below:

"Epidemics on the other side of the world are a threat to us all. No epidemic is just local." Peter Pilot, Director, London School of Hygiene & Tropical Medicine

Ebola was most fervently declared a global epidemic the moment it touched down in Dallas, Texas. It's a scary word with a scary history and with the media pulsing it in our faces 24-hours-a-day our fear continues to intensify. And yet here's the spread breakdown according to Dan Diamond over at Forbes:

Sure, the fear isn't so much of the present but of the "what if" and of the "potential" for mass (Western) casualties. So USAID and the Department of Defense and a host of other US-based organizations are strapping up and wading through the worst Ebola-stricken areas for the noble sake of ending its devastating impact on humanity. Or is it for the sake of protecting ourselves? Does intent even matter?

In their small groups ask students to discuss the questions raised in this excerpt:

Back in the large group, ask some volunteers to share what they discussed in their small groups by asking the following questions:

Next project Tweet #1 below onto the smart board or print it out for students to see: 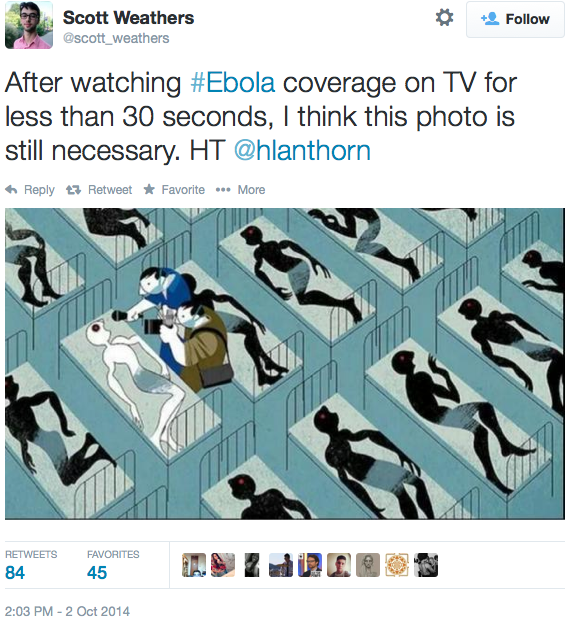 Next, project Tweet #2 onto the smart board or print it out for students to see:

The History of Tropical Medicine

Ask another volunteer or read out the following excerpt from the Huffington Post.  Then in small groups discuss the questions below:

Without diving too much into history, this is essentially how our modern efforts to eradicate malaria began. Western researchers, many of whom wanted to exploit African countries in one way or another, kept getting sick and even dying from malaria. In order to be exploitative, they had to first be healthy. So began some of our most comprehensive anti-malaria campaigns. We learned much about the disease and this knowledge has helped those most afflicted, but the intention was clear: to look out for No 1.

Professor John Farley, author of Bilharzia, spoke bluntly of this:

"Tropical medicine from 1898 to the 1970s was fundamentally imperialistic in its basic assumptions, its methods, its goals, and its priorities."

Are we becoming increasingly aware of... our global interconnectedness? Philosopher Roman Krznaric seems to think so, yet he also sees the modern forces at play in our age of ... "... hyper-individualism, where a barrage of free-market thinking, advertising propaganda and simplistic self-help is telling us we should busy ourselves with looking after No 1."

His answer?  "Empathy is the antidote we need to create a world where we embrace a philosophy of 'You are, therefore I am.'"

Discuss in the full group:

Do a go-round, asking students to share one word about today’s lesson.  Or, if very little time remains, ask students on the count of three to give today’s lesson a thumbs up, down or in between.

EXTENSION MATERIALS on interconnectedness and empathy

VIDEO - The Burial Boys of Ebola

After viewing the video, ask students to break into groups of 4-5 and discuss the questions below.  Then open things up to the larger group, asking volunteers from the smaller groups to share some of what was discussed in the smaller groups.

Questions for small- and large-group discussion

ARTICLE - Plagues on the Poor: What Ebola Can Learn From Malaria

Ask students to read the article.  Then discuss the following questions:

Photographs and Interviews by Daniel Berehulak

Portraits of those who labor and those who survived at an Ebola treatment center in Rural Liberia.

Ask students to break into small groups.  Give each group four to five of the slides, including the interview quotes and short profiles of the person in the photograph. Each group will look at different slides:  You might give group 1 slides 1-5, group 2 slides 6-10, etc.  If computers are available, use those instead.

Ask students in each group to look at their photographs, read who these people are and read their quotes about what they do in the fight against Ebola.

Students examine the vaping health crisis, how e-cigarettes work, the role of Juul, marketing to teens, and the government's role in controlling the use of vapes.

What healthcare system is best for the U.S.? Students work in teams to evaluate and debate different countries’ healthcare systems from the perspectives of a variety of stakeholders (including doctors, the wealthy, and people without insurance). Students must integrate data from a chart with information from text. This lesson works well as a followup to the Healthcare Roleplay and Scavenger Hunt lesson.

Students learn some facts about our healthcare system,and discuss Republicans' unsuccessful efforts (so far) to roll back Obamacare. The activity includes a quiz, review of key concepts, reading and discussion.