This lesson explores Trump's immigration ban and the protests and other actions that followed using photos, tweets, and headlines.

The lesson below gives students an opportunity to explore what happened in the days after President Trump signed an executive order restricting immigration. The order, signed on January 27, 2017, barred people from seven Muslim majority countries - Iraq, Syria, Iran, Sudan, Libya, Yemen, and Somalia - from entering the United States for 90 days. The order also suspended the U.S.’s entire refugee program for 120 days and indefinitely blocked Syrian refugees from entering the country.  Almost immediately, the order faced pushback from lawyers and courts. Protests erupted in airports across the country, and elsewhere.

This lesson includes a gathering followed by two optional activities, both aimed at engaging students in learning about the immigration an and the actions that followed it:

Post these pictures around the room or in the center piece.  Invite students to look at the pictures in silence, then ask them to pick one that speaks to them, for whatever reason.

In a go round, invite students to explain why they picked that photo.  In another go round, ask them to relate the picture and what they shared to what has happened recently. What are these pictures about?

Print out these tweets, and cut them into slips with one tweet on each slip. Place the slips into an envelope.

Tell students that the envelope contains tweets that were circulated after President Trump signed an executive order that barred people for seven Muslim majority countries - Iraq, Syria, Iran, Sudan, Libya, Yemen, and Somalia - from entering the United States for 90 days. The order, which was signed on January 27, 2017, also suspended the U.S.’s entire refugee program for 120 days and indefinitely blocked Syrian refugees from entering the country.

Instruct the student to hold on to the envelope while reading the tweet to avoid unnecessary distractions. Then, they should pass the envelope on to the next student, who will take out a second tweet and read it out loud.  Students should hold onto their tweet as they pass the envelope around the circle so that tweets aren’t read more than once.

If students feel uncomfortable with the tweet on the slip they draw, they can exchange it for another one in the envelope or pass on reading a tweet altogether.

Pass the envelope around the circle until all students have had a chance to read out a tweet.

Next, in a go-round (using the envelope as a talking piece, if you are using a circle format), ask students some or all of the following questions:

Consider having students read the following New York Times article, which goes into more detail about what happened in the days following President Trump’s signing of the travel ban:  https://www.nytimes.com/2017/01/29/nyregion/trump-travel-ban-protests-briefing.html. (Note: On February 3, after the Times article was published, a federal judge in Seattle temporarily blocked the immigration order from being enforced nationwide. The Trump administration promised to fight the ruling.)

After they’ve read the article, ask students to compare and contrast the New York Times article to the tweets activity they did earlier.

Have ready an envelope containing slips of paper with the headlines from this handout.

Explain that each slip of paper in the envelope contains a headline from a domestic or foreign news source that appeared in the days after President Trump signed an executive order that barred people for seven Muslim majority countries - Iraq, Syria, Iran, Sudan, Libya, Yemen, and Somalia - from entering the United States for 90 days. The order also suspended the U.S.’s entire refugee program for 120 days and indefinitely blocked Syrian refugees from entering the country.

Invite students to read their headline quietly to themselves.

Then, based on what they discussed so far today, what they already knew, and using common sense, ask students to organize the slips of paper chronologically.

Recognize that some headlines will more easily indicate when they took place in the chronology students are creating, whereas others will be harder to place.  If students ask about the time stamp in the headline, recognize that that is one piece of information that may help guide them, but that you’d like them to pay more attention to the content of the headline as they organize themselves. Remind them some articles/headlines were written well after the events addressed in them.

If possible, invite students to organize themselves physically in chronological order based on the headline on their slip of paper, so as to create a human timeline.

When students are done organizing their headlines/themselves, ask them to read out their headlines in order. Have them listen carefully to see if they might want to make more changes to their timeline.

When they’ve read the headlines out loud, ask students to discuss some or all of the following questions:

On the activity structure:

Attorney Ali Rahnama with the Iranian American Bar Association was one of more than 100 volunteer lawyers who descended on Dulles Airport near Washington, D.C., after Trump announced his order.  Rahnama was able to secure the release of several green card holders (people who are permanent residents of the U.S.).  In an interview with Free Speech Radio News he said, "Yesterday, the power of people overshadowed the people of power. We the people showed up ... We organized. We assembled. We supported our brothers and sisters who were shamefully denied entry. We chose love. We rejected hate."

Invite students to consider the combined power of the large protests across the country that were organized within hours of Trump’s order, the actions of volunteer lawyers, the stays and other countering actions by judges, the union action, and the celebrities and lawmakers who spoke out against the order.  Consider how social media and other media helped inform and mobilize people while also putting pressure on those who supported the travel ban in different ways.

More on what happened

For a more detailed exploration of the immigration ban and protests against it, see this lesson on TeachableMoment.org.

Or, if time allows, show following Fox and/or CNN videos about the events that unfolded over the weekend:

After viewing the video(s), invite students to share any additional thoughts or feelings about these events.

You might also show this NBC4 video about a Statehouse protest organized by high school students in Columbus, Ohio:
http://nbc4i.com/2017/02/01/columbus-high-school-students-lead-protest-at-statehouse/

Debrief this video by asking some or all of the following questions:

Have students work with a partner for a minute or so to create a tweet that is a take away for them from today's lesson.

Invite a few volunteers to read out their tweets to close today's lesson.

Invite students to look at the two images below, and ask them, in each case: What does this sign refer to? How does the sign relate to the events we’ve been discussing today?  If they don’t know, invite them to find out, as a homework assignment.

Start your class next time by discussing what students have learned about how these signs and how they relate to the Trump immigration ban and protests again it. .

(For information, see these Wikipedia entries on Martin Niemoller’s quote and on Emma Lazarus’s poem.) 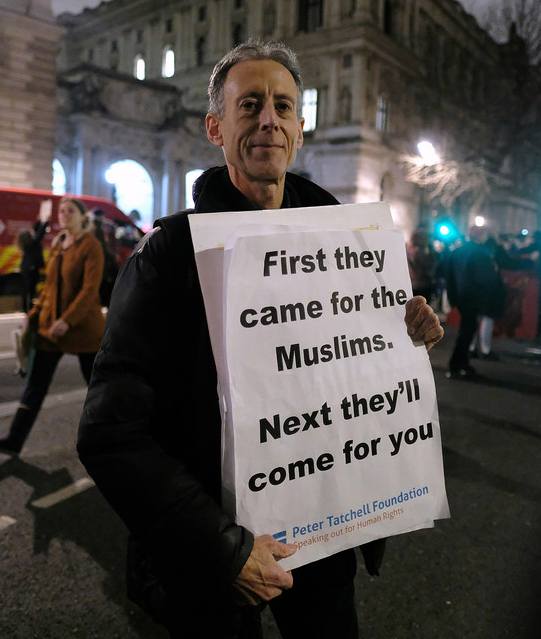 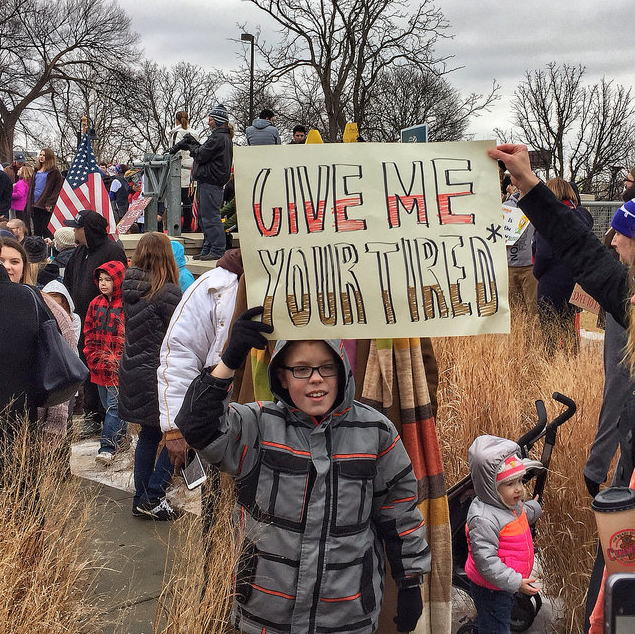