Sanctuary Cities in the Spotlight

What are sanctuary cities, and why are they girding for conflict in the wake of Trump’s election? Students explore the concept of "sanctuary" and learn about efforts by advocates to defend undocumented immigrants.

Following the election of Donald Trump, the incoming Republican president has announced plans to deport up to 3 million people from the United States. In this context, CNN issued a report titled, "‘Sanctuary cities’ gird for Trump White House," and a Washington Post headline read, "‘Sanctuary cities’ vow to protect immigrants from Trump plan."

This raises the question: what are sanctuary cities, and why are they girding for conflict in the wake of Trump’s election?

This lesson consists of two student readings. The first looks at the history of the sanctuary movement, from its modern origins among religious communities in the 1980s, through its expansion into city ordinances prohibiting police from asking people about their immigration status. The second reading looks at the prospect for conflict between the Trump administration and cities that have resolved not to go along with his deportation plans. This reading also highlights campaigns by advocates to defend undocumented immigrants. 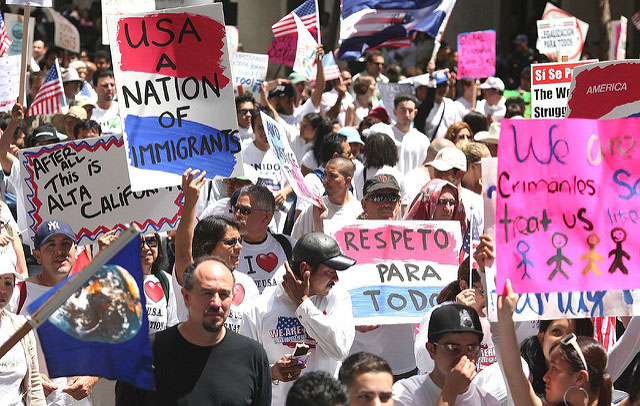 Reading 1:
What is a Sanctuary City?

The concept of sanctuary dates back to ancient Greek and Roman times, when places of religious worship would provide shelter and protection to people fleeing persecution. In the early 1980s, human rights advocates revived the idea of sanctuary to support the hundreds of thousands of migrants who were fleeing civil wars in Central America. As Susan Gzesh, Executive Director of the Pozen Family Center for Human Rights, wrote in an April 2006 article for the Migration Policy Institute:

The network of religious congregations that became known as the Sanctuary Movement started with a Presbyterian church and a Quaker meeting in Tucson, Arizona. These two congregations began legal and humanitarian assistance to Salvadoran and Guatemalan refugees in 1980.

When, after two years, none of the refugees they assisted had been granted political asylum [by the federal government], Rev. John Fife of Southside Presbyterian Church in Tucson announced... that his church would openly defy the Immigration and Naturalization Service and become a "sanctuary" for Central Americans. The Arizona congregations were soon joined by networks of religious congregations and https://www.acheterviagrafr24.com/acheter-viagra-en-ligne/ activists in Northern California, South Texas, and Chicago.

At the Sanctuary Movement's height in the mid 1980s, over 150 congregations openly defied the government, publicly sponsoring and supporting undocumented Salvadoran or Guatemalan refugee families. Another 1,000 local Christian and Jewish congregations, several major Protestant denominations, the Conservative and Reform Jewish associations, and several Catholic orders all endorsed the concept and practice of sanctuary. Sanctuary workers coordinated with activists in Mexico to smuggle Salvadorans and Guatemalans over the border and across the country. Assistance provided to refugees included bail and legal representation, as well as food, medical care, and employment.

Over time, the idea of sanctuary came to be associated with the policies of city governments that  refused to fully collaborate with federal immigration officials. In San Francisco, an official ordinance adopted in 1989 proclaims that the "City and County of San Francisco is a City and County of Refuge." As of September 2016, a total of 364 counties, 39 cities (including New York City), and four states have adopted some kind of sanctuary policy. The longest standing of these is Los Angeles, which became a sanctuary in 1979.

Opponents argue that sanctuary cities can become havens for criminals, who know they are less likely to be deported in these places. (It is worth noting that in general, the prevalence of crime among immigrants, especially recent immigrants, is actually lower than among native-born Americans.) However, many police and public safety officials support the policies of sanctuary cities because they believe they increase safety. Bill Hing, co-founder of the Immigrant Legal Resource Center, elaborated on this rationale in a 2012 article in the UC Irvine Law Review:

Though it may be tempting to regard the current multitude of sanctuary policies as statements in opposition to federal immigration enforcement decisions, the public justification offered for the vast majority of such policies generally is presented in terms of public safety. The idea is that by seeking to create good relations and trust with immigrant communities, law enforcement is more effective for the entire community. In fact some immigrant rights advocates and law enforcement officials rail against the "sanctuary" terminology, arguing that the misnomer distracts the public from the real purpose of the policies to provide safe communities for all residents. They prefer "community policing," "confidentiality," or "preventive policing" labels.

The evolution of some relatively recent sanctuary policies makes clear that public safety is their main goal. In New Haven, Connecticut, in 2005, the police chief, government officials, and community leaders adopted two initiatives "designed to make New Haven more welcoming and safer for immigrants, and to help police officers during interactions with immigrants." The police issued a general order outlining procedures for police to follow during encounters with immigrants, and the city began issuing identification cards to all city residents regardless of immigration status. New Haven’s population was close to a quarter Latino by 2007, and 10,000 to 15,000 residents were undocumented....

Under the police department’s general order, no distinction is made between documented and undocumented immigrants because they are all "part of our community." In other words, the department "would rather solve a homicide than worry about" the immigration status of a witness or victim. Officers are prohibited from asking crime victims, witnesses, and anyone who approaches an officer for assistance about immigration status. As a result of the policy and follow-up initiatives, cooperation with police has "increased dramatically" and important strides have been made in getting the community to overcome its "fear of the police."

Now, in anticipation of the incoming Trump administration, advocates of sanctuary are gearing up to defend their policies, even as their opponents seek to eliminate sanctuary cities altogether.

Reading 2:
The Future of Sanctuary Cities Under the Trump Administration

Following the election on November 9, 2016, incoming president Donald Trump announced his intention to deport up to 3 million people from the United States. As part of his plan, Trump vowed to cut off federal funding to all sanctuary cities, in the hopes of compelling them to overturn their sanctuary policies and collaborate with deportations.

As journalist Alexa Ura explained in a November 18 article in the Washington Post, Trump’s agenda has caused considerable alarm within immigrant communities and among immigrants’ rights groups. Ura wrote:

Trump has railed against "sanctuary cities," promising to cut off federal funding to municipalities "that refuse to cooperate with federal authorities." It’s not yet clear whether, or how, the Trump administration could make good on that promise. But the simple fact that he says he’ll try is enough to terrify many undocumented immigrants.

"I was scared at first, but as time goes by, I’m feeling more panic," Claudia Gollinelli, an undocumented immigrant from El Salvador who works as an electrician in Dallas, said in Spanish. "And panic debilitates people."

For many of the immigrants living in "sanctuary cities" and places with less formal policies, Trump’s presidency could upset the precarious balance that has allowed millions of undocumented people to live and work in cities across the United States for many years.

Despite the looming threat of lost funding or worse, many city governments have declared their continuing commitment to be sanctuary cities. In Los Angeles, where nearly half the population is Latino, Mayor Eric Garcetti vowed to fight widespread deportations of undocumented  immigrants. Chicago Mayor Rahm Emanuel declared that Chicago "will always be a sanctuary city." And New York City Mayor Bill de Blasio announced that New York would continue to defend undocumented immigrants. "We are not going to sacrifice a half million people who live among us, who are part of our community," de Blasio said.  "We are not going to tear families apart." (An estimated 500,000 people in New York City are undocumented.)

Across the nation, officials in sanctuary cities are gearing up to oppose President-elect Donald J. Trump if he follows through on a campaign promise to deport millions of illegal immigrants. They are promising to maintain their policies of limiting local law enforcement cooperation with federal immigration agents.

In doing so, municipal officials risk losing millions of dollars in federal assistance for their cities that helps pay for services like fighting crime and running homeless shelters. Mr. Trump has vowed to block all federal funding for cities where local law enforcement agencies do not cooperate with Immigrations and Customs Enforcement agents.

But as Mr. Trump prepares to take office, Democratic bastions, including Boston, Philadelphia and San Francisco, have reaffirmed plans to defy the administration and act as a kind of bulwark against mass deportations.

"I like to compare this to conscientious objector status," said Mayor Libby Schaaf of Oakland, Calif. "We are not going to use our resources to enforce what we believe are unjust immigration laws."

Supporters of tougher immigration policies, however, expect a swift response. Dan Stein, the president of the Federation for American Immigration Reform, which opposes legalization for unauthorized immigrants, predicted "a very aggressive, no-holds-barred support for using the full power of the federal government to discourage this kind of interference.".

Some believe Mr. Trump could go further than simply pulling federal funding, perhaps fighting such policies in court or even prosecuting city leaders...

The fight could also signal a twist in the struggle over the power of the federal government, as this time liberal cities — rather than conservative states — resist what they see as federal intervention.

As elected officials prepare for a struggle over the future of sanctuary cities, pro-immigrant advocates are going on the offensive by pushing to expand the sanctuary movement to additional cities, churches, and even universities. Less than one week after the election, a group called Movimento Cosecha organized nationwide student walk-outs to demand that universities become sanctuaries. In an article for the website Waging Nonviolence, journalist Sarah Aziza described the walk-outs:

On Wednesday, [November 16,] thousands of students staged walk-outs on over 80 campuses nationwide, signaling their commitment to maintain "sanctuary campuses" to protect immigrant students. Demonstrators also presented their school administrations with specific demands, including commitments to refuse campus access to Immigration and Customs Enforcement officials, continued support of the Deferred Action for Childhood Arrivals, or DACA, program, and the protection of students regardless of documentation status.

Cosecha organizer Carlos Saavedra was encouraged by the turnout on Wednesday, and says the coming weeks will be crucial for the movement. "The election of Trump has a lot of people angry and fearful, and many — both immigrant and non-immigrant — want to get involved," he said. "The question for us now is how to channel that energy into an organization that doesn’t back down."

Saavedra says that while many communities may be affected by the election of Donald Trump, many immigrants, particularly those in the undocumented community, feel "they may be first on the chopping block." Saavedra worries about his own brother, a DACA "Dreamer," who may be "one of the first to go" if Trump makes good on his promise to repeal the DACA program...

Cosecha’s long-term goal, says Saavedra, is to change the national narrative surrounding the immigrant community by combating xenophobia and promoting "permanent protection, dignity and respect" for all.

It remains to be seen how far Trump’s administration is willing to go to force collaboration from sanctuary cities, how city officials will respond, and how effective social movement groups will be in organizing new sanctuaries. But no matter what happens, it is clear that the lives of immigrants and their families have already been changed by Donald Trump’s election.

Students discuss President Trump’s prime-time speech about border security on January 8, 2019, and examine whether the facts back up his statements.