#JeSuisCharlie: Analyzing Expressions of Solidarity after the Paris Attacks

Students consider responses to the attack on Charlie Hebdo from multiple points of view by examining tweets containing different expressions of solidarity, and create their own tweets.

For three days in early January 2015, two al-Qaeda affiliated brothers and an associate shook France, Europe and much of the rest of the world. The two brothers forced their way into the offices of France’s satirical newspaper Charlie Hebdo, where they targeted and killed 10 people at a lunch-time editorial meeting.  They also shot and killed the editor’s bodyguard and executed a police officer, Ahmed Merabet, as he tried to stop the terrorists.

The next day, while the brothers, now identified as Cherif Kouachi and Said Kouachi, were on the run, the associate, later identified as Amedy Coulibaly, is said to have killed another police officer in the southern Paris suburb of Montrouge.  A manhunt across France, deploying 80,000 police, ended two days later on January 9 in a blaze of gunfire and explosions.  The Kouachi brothers, holed up in a printing plant north of Paris with a hostage, were shot and killed.  Coulibaly had taken hostages at a kosher supermarket on the eastern edge of the city. Four of the hostages and Coulibaly were killed.

Witnesses at the Charlie Hebdo offices heard the gunmen shout "We have avenged the Prophet Muhammad" and "Allahu Akbar," which is Arabic for "God is great."  The apparent Islamist militant attack was in response to the newspaper’s publishing of satirical cartoons of the prophet Muhammad.  In an interview with journalists hours before he was killed, Cherif Kouachi claimed to have been sent by Al-Qaeda in Yemen as a defender of the prophet. Amedy Coulibaly, also speaking with a journalist the day he was killed, claimed to have committed his acts to defend oppressed Muslims.

On January 11, over a million people took part in a "unity march" in Paris to protest the violence. It was the largest demonstration in French history.  Two million more marched in cities across France.

A note on the use of the word "Islamist"

Note that in describing the Kouachi brothers and Coulibaly, we use the word "Islamist" - not "Islamic" or "Muslim." Islamism, also known as political Islam, refers to an ideology that considers Islam not as a religion but as a political system that expects all Muslims to turn to a militant form of their religion and to unite politically. Muslims who do not espouse this view are considered to be infidels by Islamists as much as non-Muslims are.

Some people are quick to generalize and incorrectly equate Muslims with Islamists, a tiny minority of extremists who use Islam to promote their views - much as a handful of extremists use other religions like Christianity, Judaism or Hinduism to propagate their political agenda, at times using violence to attain their goals. It's important to foster better understanding of these distinctions and to be especially sensitive to this issue if there are Muslim students in your classroom.

To distinguish the Kouachi brothers and Coulibaly from other Muslims in France and beyond, you may point to Ahmed Merabet, the French Muslim police officer who was executed by the brothers as he tried to stop them from fleeing the crime scene at Charlie Hebdo, or Lassana Bathily, the Malian Muslim employee of the Kosher supermarket.  Bathily ushered more than a dozen customers into the supermarket’s cold storage away from the heavily armed Amedy Coulibaly, before going outside to help with the police rescue of the hostages.

Ask students what associations they have with the name "Charlie Hebdo." Consider charting their associations graphically as a web to create a visual representation.  Making a web often stimulates creative thinking. To make one, write a core phrase, in this case "Charlie Hebdo," in the center of the board and circle it. Student associations with the core phrase are written so that they radiate out from the center. Related ideas can be grouped.

Encourage associations while energy is high. Ask open-ended questions to stimulate responses from groups that are struggling to come up with associations. As energy tapers off, ask students to read what's on the web and ask some or all of the following debrief questions:

Ask a few volunteers to share what they know about the events that took place at the Charlie Hebdo offices in early January and possible connected events in Paris that week.

Add to what your students share by touching on what is written in the "to the teacher" section at the start of this lesson plan.

Explain that in today’s lesson you’ll be exploring a range of responses to the Paris attacks (and their aftermath) by looking at tweets from a series of hashtags that have trended since early January.

All tweets used in today’s lesson express solidarity in some way.  Expressions of solidarity can spring from a shared need for healing.  They can help a community come together after situations of crisis, promoting the kind of unity called for in the march in Paris after the attacks.

Students will be asked to think critically about the impact of these tweets, intended or otherwise.

Exploring Different Tweets in Response to the Paris Attacks

Elicit and explain that people around the world used social media to respond to the attack on Charlie Hebdo using the hashtag #JeSuisCharlie, which translates to #IamCharlie, in what was widely seen as a show of solidarity with those mourning in Paris and a support of free speech.  Other hashtags appeared soon after with a different take on solidarity in the aftermath of the events.  Below are a range of tweets pulled from different Twitter handles related to the Paris attacks for you and your students to explore.

The #JeSuisCharlie hashtag trended overwhelmingly on twitter in various different languages in the days following the attacks.  The slogan was also chanted at the unity rally in Paris that brought together a diverse crowd of over one million the Sunday after the attacks.  The slogan is meant to express solidarity with the victims of the attacks and with those mourning in its aftermath, as well as support for free speech.

Je Suis Charlie has been seen and heard across France and even made it on to the Hollywood red carpet and stage during the Golden Globe Awards as American actors pledged their solidarity with those in Paris.  In his acceptance speech for the Cecil B. DeMille Award, George Clooney was quoted as saying:

"Millions of people - not just in Paris but around the world, Christians and Jews and Muslims, leaders of countries all over the world - they didn’t march in protest, they marched in support of the idea that we will not walk in fear. We won’t do it. So Je Suis Charlie."

Using the hashtag #JeSuisCharlie, many on Twitter also replaced their profile photo with a white-on-black image of the phrase: 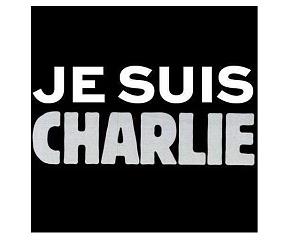 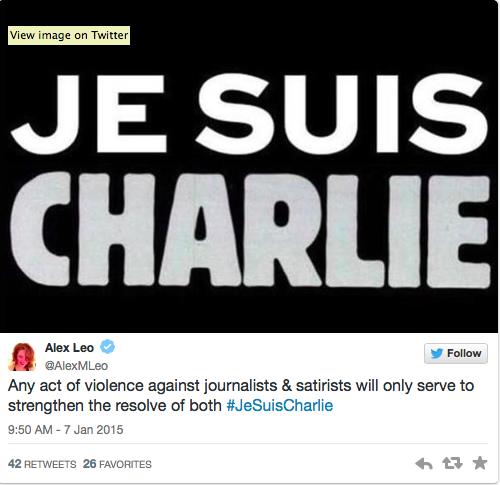 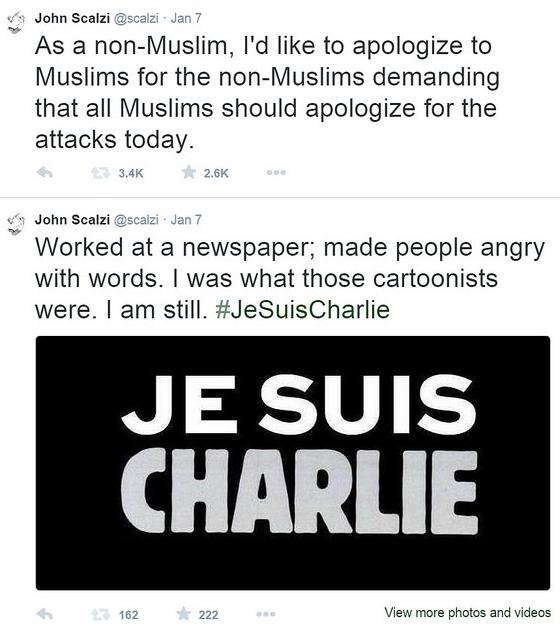 Text of the two tweets, both by John Scalzi:

"As a non-Muslim, I'd like to apologize to Muslims for the non-Muslims demanding that all Muslims should apologize for the attacks today."

"Worked at a newspaper; made people angry with words. I was what those cartoonists were.  I am still. #JeSuisCharlie" 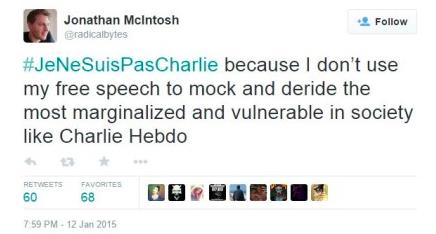 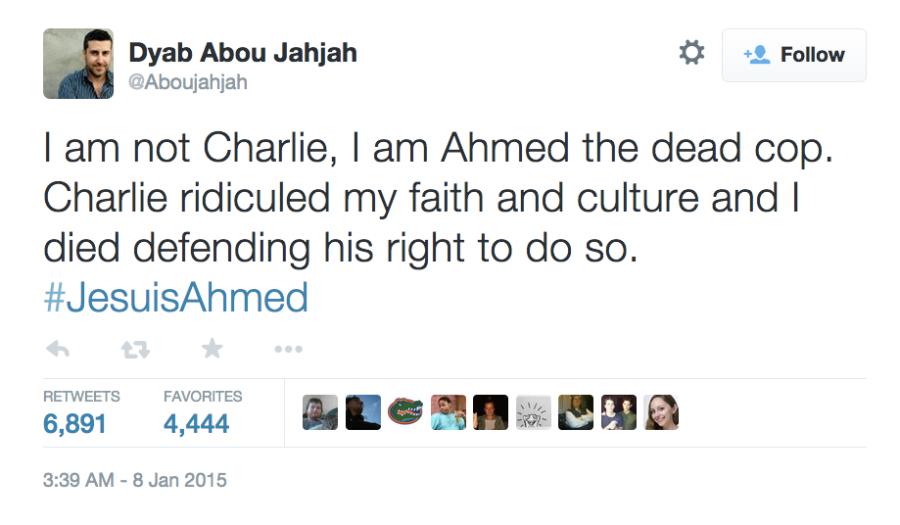 "I am not Charlie, I am Ahmed the dead cop. Charlie ridiculed my faith and culture and I died defending his right to do so. #JesuisAhmed"

Project or hand out a print up of the following tweet for students to study before asking the questions below it: 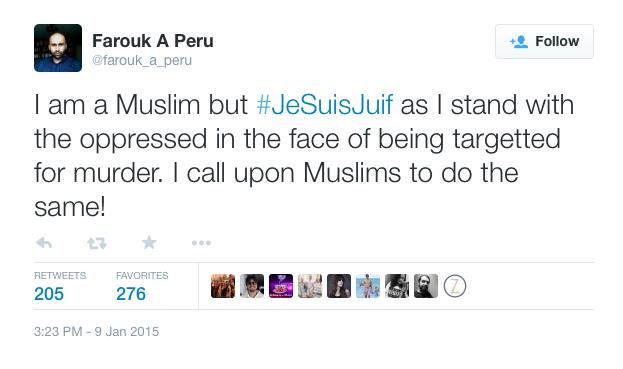 "I am a Muslim but #JeSuisJuif [I am Jewish] as I stand with the oppressed in the face of being targeted for murder. I call upon Muslims to do the same!"

Creating Your Own Tweets

In small groups ask students to come up with a tweet based on today’s lesson that they might want to share online.  Ask a few groups to share out their tweets and invite the rest of the group to provide feedback by asking them to discuss:

Ask students to share one thing they learned today.

Once students have researched these questions, discuss the information they have collected. Discussion might touch on questions such as:

Students learn about and discuss strikes by teachers in West Virginia, Oklahoma, and Kentucky, and consider how they are connected to student-led protests over gun violence.

This activity uses tweets to have students consider some of the events that put feminism on the front burner in 2017 - from the women's march to the #MeToo movement.