Students deepen their understanding of an aspect of Indigenous peoples' relationship with the earth through two short films about peoples’ resistance to the loss of access to clean drinking water. 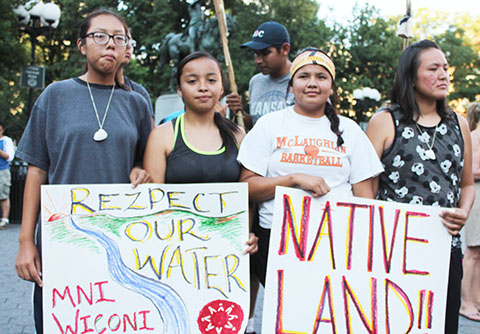 This lesson allows students to deepen their understanding of an aspect of Indigenous peoples relationship with the earth. Students will engage with two short films about peoples’ resistance to the privatization and loss of access to clean drinking water. The activity, which is designed to be used over two days or two sessions, aims to bring awareness of the current global crisis of the exploitation and privatization of our natural resources and of how communities can come together to protect the environment and human rights. Resources: Abuela Grillo & Water Warriors

We recommend that you watch both films before presenting them to your students.

On Day 2, we suggest opening the activity by having students read a statement acknowledging the Native peoples on whose land you and your students live.

“This animated film takes you on a journey with Abuela Grillo (Grandmother Cricket), who walks through rural and urban landscapes with a raincloud constantly looming over her shoulder. She encounters various obstacles as the film weaves a sad – and deeply symbolic – tale of environmental exploitation and government corruption.”

The Abuela Grillo character is based on a myth from the Ayoreo, a nomadic Indigenous people of Bolivia. Grandmother Cricket, a special being who can create rain, tells the story of a historic moment in Bolivian water politics - The Cochabamba Water War. This  was a series of protests that took place in Cochabamba, Bolivia's between December 1999 and April 2000 in response to the privatization of the city's municipal water supply company. The wave of demonstrations and police violence was described as a public uprising against water prices. “Abuelo Grillo’s ability to make it rain is a metaphor for her people’s inherited, old wisdom and spiritual power to retain balance and good health to their people and land. Water is the most essential part of life, so the metaphor speaks to all the issues in the world over water and how we are connected.”
Source: https://chaikadai.wordpress.com/2012/11/03/abuela-grillo-grandmother-cricket/)

“When an energy company begins searching for natural gas in New Brunswick, Canada, Indigenous and white families unite to drive out the company in a campaign to protect their water and way of life.”

Texas-based SWN Resources arrived in New Brunswick, Canada, to explore for natural gas. The region is known for its forestry, farming, and fishing industries, which are both commercial and small-scale subsistence operations that rural communities depend on. In response, a multicultural group of unlikely warriors – including members of the Mi’kmaq Elsipogtog First Nation, French-speaking Acadians and white, English-speaking families – set up a series of road blockades, preventing exploration. This short film shows us the impact and outcomes after months of resistance.
Source:  https://www.storyline.media/waterwarriors

Invite three or four students to share a one-word response to this question:

As the teacher, share your response last, and note that it takes water to create most of these beverages.

Invite three or four students to answer these questions:

Introduce the story of Abuela Grillo, using the material above. (2 minutes)

In pairs, have students discuss:

Thank students for sharing your impressions, feelings, experiences, or thoughts. Suggest that when we lose our connection to the earth and to traditions that value the earth and its resources, we begin to disrespect and devalue our resources, our lifelines, and each other.

In a moment of silence, have students give gratitude for having access to water.

See suggestions above for creating a land acknowledgment statement in advance of this session.

If you have a statement already, ask students:

If you do not have a statement prepared, ask students:

Elicit or explain what a land acknowledgment is, and make a plan with students to create a statement for your school/community.

Have each student share their chant. Thank each other.

Indigenous People's Day and Native American Heritage Month (in November) are an opportunity to learn about Indigenous peoples' history, culture, and perspectives.

Students learn about the growing effort to acknowledge the Indigenous people whose lands we inhabit - and create their own land acknowledgment statement.

The holiday invites exploration of everything from American history to gratitude.