Climate Disruption – and Climate Action – in 2018

Students look at photos, read about, and discuss some of the climate crises in 2018, then survey a range of actions being taken to address it.

In this activity, students look at photos, read about, and discuss some of the climate crises in 2018. Then, they survey a range of actions being taken to address it in the U.S. and the world.

See this handout for the image below, the gallery walk images, and the read-aloud section.

Ask students to look at the image below and included in this handout.

What do they think it represents?  Ask them to turn to a partner to share out any thoughts and feelings they have about the image.  Ask a few volunteers to share out with the whole class, what they shared with their partner. 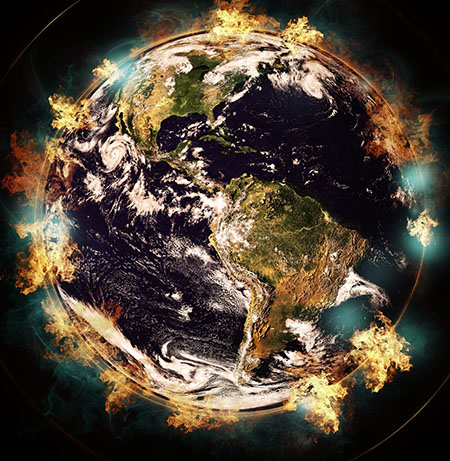 Summarize and explain that climate change is causing extreme weather events around the world, as became clear once again in 2018.  Global greenhouse gas emissions reached record highs. The special report on limiting global warming, published in October, by the Intergovernmental Panel on Climate Change (IPCC), said we may have only till 2030 to avert catastrophic climate change.

But as we look back at 2018, it is clear that the reality of climate change is already having severe and destructive effects around the world, as the next activity illustrates.

Post the images in the handout (beginning on page 2) around your room. Invite students to walk around the space quietly, taking a walk through 2018, using the images with their captions to learn about some of the climate disasters that punctuated the year.

As students return to their seats, invite them to do a free-write about the images and information they saw in the gallery walk.

Next, ask students to break into small groups to share their thoughts and feelings on the questions above and any other issues the images and events brought up for them.

Then, facilitate a full class discussion. Elicit and explain that “weather” refers to the short-term conditions of the atmosphere in a particular area, whereas “climate” refers to weather patterns over the long term.  What do the events in our gallery walk tell us about climate change – or climate disruption, as it is sometimes called?

Read the following introduction out loud:

As we just saw in our gallery walk activity, climate change is having devastating effects around the globe. Extreme weather events are on the rise. Whether we want to or not, we’re all in this together, including future generations.

In October 2018, the UN Intergovernmental Panel of Climate Change (IPCC) released a landmark report on the impacts of global warming, compelling us to strengthen our global response to the threat of climate change.

Urgent, unprecedented efforts are needed right now to keep global warming in check, to a maximum of 1.5°C above pre-industrial levels.  With every additional fraction of a degree of warming, the report warns, the risk of heat waves, drought, associated wildfires, heavy rains, and coastal flooding will worsen around the globe. This is moving people, governments and institutions to action in different ways.

Invite different student volunteers to read out loud this list of recent or ongoing efforts around the world, most of them voluntary, to combat climate change. The list is included in the handout.

According to the Intergovernmental Panel on Climate Change (IPCC) “limiting the global average temperature rise to 1.5°C is still possible; however, it will require “unprecedented” transitions in all aspects of society, including: the transformation of energy, agricultural, urban and industrial systems; engagement of non-state actors; and integration of climate action into broader public policy and development frameworks.”

And though the agreements and voluntary actions on a local, state, national and international level that we discussed in today’s lesson are important, “ultimately, the world’s success or failure in combating climate change will be determined not by commitments [and voluntary actions], but by concrete action at the national level [everywhere], in partnership with businesses, provinces and cities.”

The IPCC also noted the promise of this moment: “With clear benefits to people and natural ecosystems, limiting global warming to 1.5°C compared to 2°C could go hand in hand with ensuring a more sustainable and equitable society.”

Honor the planet by engaging students in our lessons on the environment and climate.