How Can We Prevent Climate Catastrophe?

A new UN report on climate disruption points to the need for immediate action. In this lesson, students discuss the report and what kind of response it requires.

Consider combining this lesson with our concurrent lesson about the lawsuit young people have brought against the government: Young People's Suit Over Climate Disruption Comes to Court. 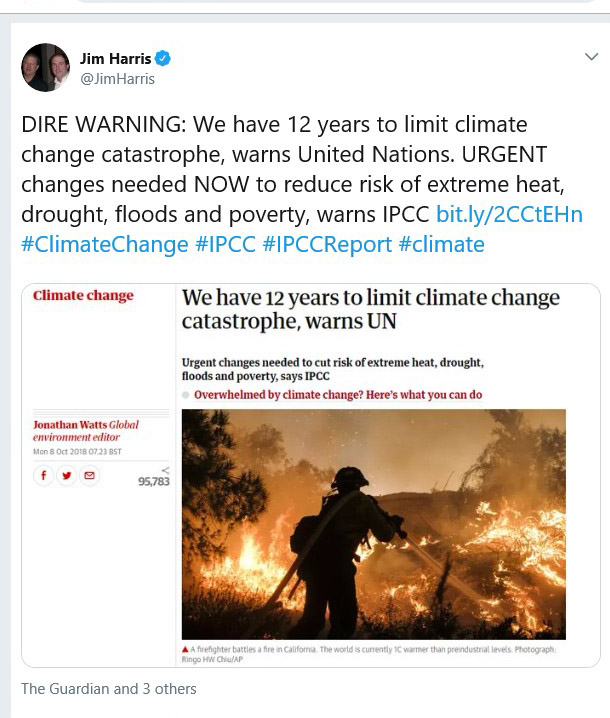 Ask students if they have heard about the report on climate change by the UN’s International Panel on Climate Change (IPCC) issued in October 2018. The IPCC is the world's leading scientific authority on climate change.

Explain that according to the report, we must cut global carbon emissions in half in 12 years (by 2030), or we will be on track to experience two degrees Celsius of global warming as soon as 2040. Two degrees Celsius is the equivalent of 3.6 degrees Fahrenheit. (To convert from Celsius to Fahrenheit, multiply by 1.8 and add 32.)

For context, you may wish to explain that the planet is already 1 degree C warmer than it was before the Industrial Revolution. The IPCC argues that allowing the planet to warm to 2 degrees will be much worse than if we can limit it to 1.5 degrees.

Student responses may include melting of the ice caps, sea level rise, increase in extreme weather events such as droughts, heat waves, and flooding, death of coral reefs, and other ecosystems, and so on.

Project the statistics below on the board or provide them in a handout (CarbonBrief.org). Ask students to read each one aloud.

Discuss as a class, in a circle with a talking piece, or in small groups:

Explain that the IPCC report is actually relatively optimistic, and the long-term effects of warming will only increase as we emit more carbon into the atmosphere. Explain that the last time that our planet was 2 degrees warmer, in the Pliocene era, sea levels were about 60 feet higher than they are now. (GlobalChange.gov)

Project this image to demonstrate what 60 feet of sea level rise would look like in New York City:

(If students are interested in further exploring future possibilities for New York City, invite them to read the novel New York 2140 by Kim Stanley Robinson, or this review of the book.)

What is Stopping Us from Taking Action?

Remind students that according to the IPCC report, we must cut global carbon emissions in half by 2030 in order to prevent warming to 2 degrees. What would be necessary for this to happen? Here are some ideas people have shared:

Project this tweet and ask a student to read it: 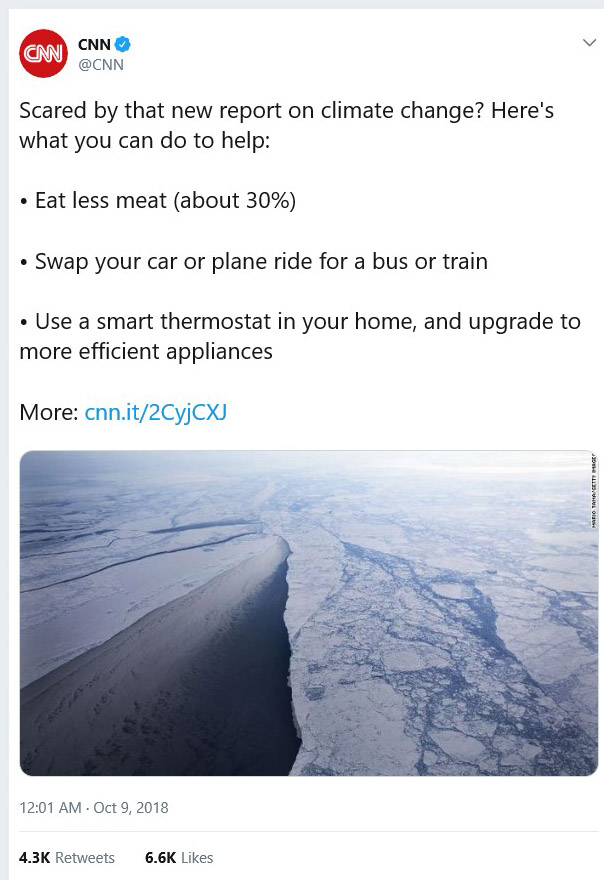 Then project this second tweet and ask another student to read it: 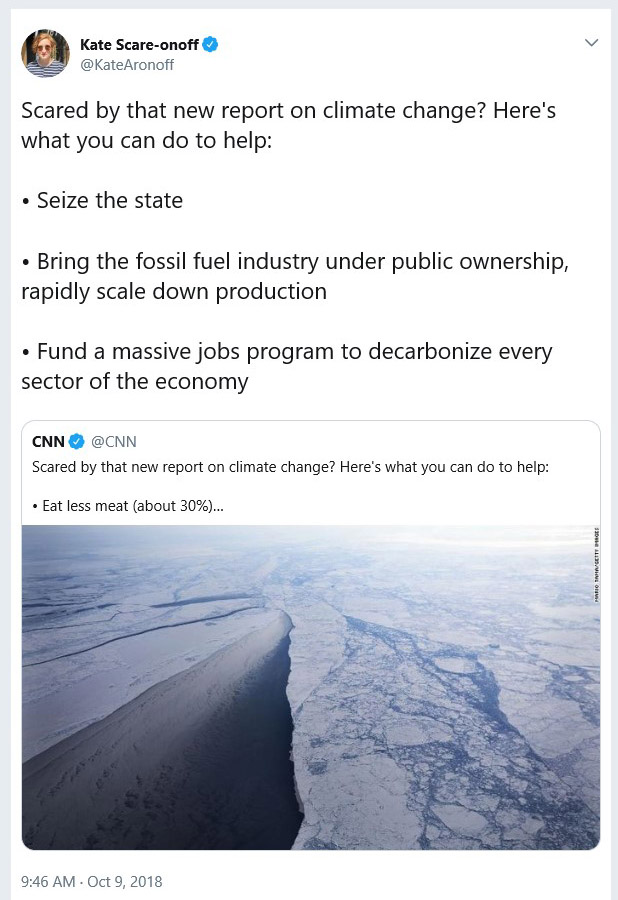 Share with students that some young people are pursuing a legal strategy to address climate change. Their case, known as Juliana v. U.S., will be heard in federal court in Oregon starting on October 29, 2018. The young plaintiffs argue that the U.S. government, in failing to take serious action to stop climate disruption, has failed to protect the public trust for current and future generations. (For more, see our lesson on this suit.)

Project this tweet and ask a student to read it:

(You may wish to read the author’s next two tweets in the thread as well.) 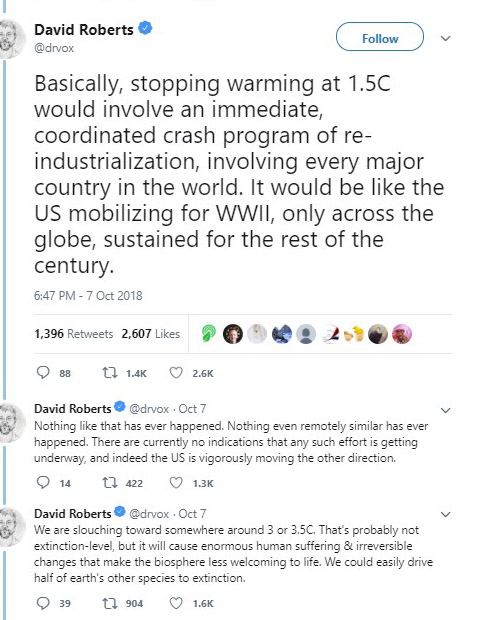 Inform students that in today’s money, the Allies spent $97 trillion on mobilizing for World War 2, and the U.S. nearly doubled its GDP in seven years (from 1938 to 1945). (source)

Read aloud this excerpt from this essay by Samuel Miller McDonald:

“In order to address this crisis, it is simply necessary that we love other people more selflessly than we do now. That, above all, is what confronting climate disruption demands. Parents often love their children selflessly, sure. But that’s not enough: they have to learn to love other children just as heartily. As climate refugees flee their homes, we’ll have to take strangers into ours. We’ll have to willingly spend tons of public money—that is, our own money—to experiment on technology that may fail, on projects that may weaken our country’s strategic position in the world, on funding projects with benefits we may never see. We have to do the uneconomical thing, take less to give someone else more, pay more for electricity, or pool our resources to buy solar panels. We have to want a future for someone we’ve never met on the opposite side of the world.”

If time permits, continue reading from the essay:

“In all the superhero and spy movies, somehow the world always finds itself about to be destroyed. To save the world from destruction, the heroes must do some acrobatics, punch some bad guys, and look really cool. Sometimes they make a sacrifice or two. Well, the real end of the world is now staring at us in the face. It’s real. And no superhero is going to fly down and take care of it for us. Every one of us has to be heroic, and real heroics demand far more than what movies tell us they demand. Meeting this challenge will require an almost inhumanly selfless generosity and courage. That’s just the nature and the scale of the problem.”

In a go-round, invite students to share what kind of support they personally need in order to face and fight the climate crisis, and one thing they themselves can do to support others.

Honor the planet by engaging students in our lessons on the environment and climate.