Students reflect on the state of democracy in the U.S. in light of the insurrection at the Capitol, and discuss news stories about events during the first week of 2021.

Note: If students are well informed about recent events and rich discussion ensues, consider putting students' names in the chat box to create an order that students can use to share out. This is a way to invite each student's voice, one after the other, without you as the teacher having to call on students. Instead, students pass the “speaking turn” to the next person on the list so that everyone in class gets their turn to speak (or pass). Everyone else is invited to listen closely, without interrupting.

If you think there is more that students have to share, after one full group share out, consider asking, when it’s your turn again:

Give students as many turns as make sense (as time allows) to bring all voices and perspectives into the room.

Note: You might share with students that the New York Times is inviting comments from teens about the storming of the Capitol and what it says about the strength of American democracy. Students can participate here.

Have students free associate with the concept of democracy by submitting up to three words or phrases  to create a democracy word cloud, using a mentimeter link.

Next, ask students to share any observations they have about the word cloud.

Definition of DEMOCRACY (from Merriam-Webster.com)

1 a: government by the people; especially : rule of the majority b: a government in which the supreme power is vested in the people and exercised by them directly or indirectly through a system of representation usually involving periodically held free elections

Winston Churchill, British Prime Minister in the mid 20th century, once said, "Democracy is the worst form of government except for all those others that have been tried."

Ask students to discuss this quote in small groups, by considering the following questions:

Back in the large group, ask students to share some of the things discussed in their pairs.

Pull up the following headlines on your screen for students to read.

Explain that these are headlines from different news outlets over the first week of 2021. Invite students to pick one that they either:

2. Washington Post, January 3, 2021:
‘I just want to find 11,780 votes’: In extraordinary hour-long call, Trump pressures Georgia secretary of state to recalculate the vote in his favor

5. USA Today, January 6, 2021:
'Burn down DC': Violence that erupted at Capitol was incited by pro-Trump mob on social media

7. AZ Central, January 7, 2021:
'We have tirelessly fought to be heard': Black voters in Arizona both disappointed, encouraged about political events

Explain that next you’ll be taking students through some of the events of the past few days in more detail to give them a chance to reflect some more on the state of the American democracy.  Explain that you’ll be sharing segments from the same articles that the headlines referenced in part one of this activity.

Have a volunteer read one of the news segments below, then either discuss as a large group using some or all of the questions provided or have students discuss the news segment in smaller breakout groups, before coming together for a larger group discussion.

Repeat for as many of the segments as you have time for.

Ted Cruz of Texas, Ron Johnson of Wisconsin and nine other Republican U.S. senators or senators-elect said on Saturday they will reject presidential electors from states where Donald Trump has contested his defeat by Joe Biden, “unless and until [an] emergency 10-day audit” of such results is completed.

The move – welcomed by Vice President Mike Pence – is largely symbolic and unlikely to overturn the presidential election. Nonetheless, it adds to a sense of deepening crisis affecting US democracy. ….

The senators made reference to the contested election of 1876, which ended in the appointment of such a commission. “We should follow that precedent,” they said.

Most well-informed observers would suggest otherwise, given that process put an end to post-civil war Reconstruction and led to the institution of racist Jim Crow laws across the formerly slave-owning south.

In August, the Pulitzer-winning historian Eric Foner told the Guardian: “The election of 1876 would not have been disputed at all if there hadn’t been massive violence in the south to prevent black people from voting and voter suppression like we have today. Now, voter suppression is mostly legal.”

President Trump urged fellow Republican Brad Raffensperger, the Georgia secretary of state, to “find” enough votes to overturn his defeat in an extraordinary one-hour phone call Saturday that legal scholars described as a flagrant abuse of power and a potential criminal act.

The Washington Post obtained a recording of the conversation in which Trump alternately berated Raffensperger, tried to flatter him, begged him to act and threatened him with vague criminal consequences if the secretary of state refused to pursue his false claims, at one point warning that Raffensperger was taking “a big risk.”

Throughout the call, Raffensperger and his office’s general counsel rejected Trump’s assertions, explaining that the president is relying on debunked conspiracy theories and that President-elect Joe Biden’s 11,779-vote victory in Georgia was fair and accurate.

But this is not “the only ongoing effort to overturn the results of the [November 2020] election. Multiple Republican senators have said they will object to the Electoral College returns from particular states, and Trump has falsely declared that the vice president has the unilateral power to “reject fraudulently chosen electors.”

Throughout this ordeal have come repeated suggestions that this is all performative, that even Trump knows he lost the election, and that Republican senators are just playing to their party’s base, to better position themselves for 2024.

…. It compounds our ongoing crisis, in which various aspects of our system that empower minorities either constitutionally or opportunistically have been used to create conditions in which an electoral minority can impose its will on the majority. States containing less than 20 percent of the nation’s population elect a majority of the Senate. The Republican Party has used its control of this chamber to capture the Supreme Court and the rest of the judiciary. Through gerrymandering and the uneven distribution of the population, the GOP does about 6 percent better in the median House district than it does in the national popular vote.”

It was a stunning scene Trump encouraged hours beforehand and refused to condemn afterward. It left one woman dead, sent members of Congress ducking for cover and forced evacuations after pipe bombs were discovered in nearby office buildings. ….

In many ways the spectacle was the natural culmination of a presidency built on disregard for democratic norms, antagonizing government institutions and willful ignorance of the far-right's violent tendencies. The mob interrupted the very act that will certify President-elect Joe Biden's victory and formalize Trump's loss. ….

Only after pleading from aides and congressional allies inside the besieged Capitol building did Trump release a taped video urging the mass of his supporters -- many carrying Trump flags or wearing Trump paraphernalia -- to "go home," while still fanning their misplaced grievances about a stolen election.

Apart from inciting it, Trump appeared otherwise disengaged from the melee.

Thousands of President Donald Trump's supporters and other rioters who stormed the Capitol on Wednesday as Congress prepared to formally declare Joe Biden president fomented the violence and chaos in the days leading up to the protest.

There were calls from Boogaloos, an extremist group, to “Burn down DC.” One person asked on Twitter, “Whos running arms and ammo to dc for when the fun starts.” ….

"Today's tragic attack on the U.S. Capitol is the result of a years-long process of online radicalization. Millions of Americans have been the target of disinformation and conspiracy theories until they can no longer tell the difference between reality and fiction. This moment has been building since 2016," said Emerson Brooking, resident fellow at the Atlantic Council's Digital Forensic Research Lab and co-author of “LikeWar: The Weaponization of Social Media." "President Trump lit the fuse. He has repeatedly used his social media accounts to spread falsehoods and to incite violence against American citizens.”

Well, it’s official. Georgia Democratic Senators-elect Raphael Warnock and Jon Ossoff are going to Washington. The Senate will be evenly divided between Democrats and Republicans. That means that, with Democratic Vice President-elect Kamala Harris holding the tie-breaking vote, Democrats will have the narrowest possible majority in the Senate.

If the Senate were anything approaching a democratic institution, however, the Democratic Party would have a commanding majority in Congress’s upper house. The Senate is malapportioned to give small states like Wyoming exactly as many senators as large states like California — even though California has about 68 times as many residents as Wyoming.

Because smaller states tend to be whiter and more conservative than larger states, this malapportionment gives Republicans an enormous advantage in the fight for control of the Senate. Once Warnock and Ossoff take their seats, the Democratic half of the Senate will represent 41,549,808 more people than the Republican half.

Wallace, 35, is the director of Black Phoenix Votes and the state organizing director for the Working Families Party. She told The Arizona Republic that even before Wednesday's events, she involved her children in discussions and actions surrounding racial justice and other movements. …. "There is a moment right now that my household is taking advantage of to grow and to talk and to have these conversations."

Wallace called Wednesday's Capitol siege "undisguised white supremacy" and "white nonsense," saying it was a "wake-up call" about the state of the nation. "… right now [she said there’s] action we're going to have to take … to save democracy," …. "As dramatic as that sounds, that's literally what's at stake right now."

Though she said she believes Black voters have historically been "underestimated," she called Georgia an "amazing" win made possible by the Black community.

"We have tirelessly fought to be heard and to exercise that right to vote, so Georgia is huge," she said.

In the early morning hours of Thursday, January 7, 2021, a joint session Congress certified Joe Biden and Kamala Harris as the winners of the 2020 election, hours after a pro-Trump mob stormed the capital in a violent siege that interrupted but ultimately failed to stop proceedings.

The damage to the Capitol was extensive, with reporters posting videos of ransacked Senate offices, broken windows, overturned furniture, and emptied out drawers and cabinets. 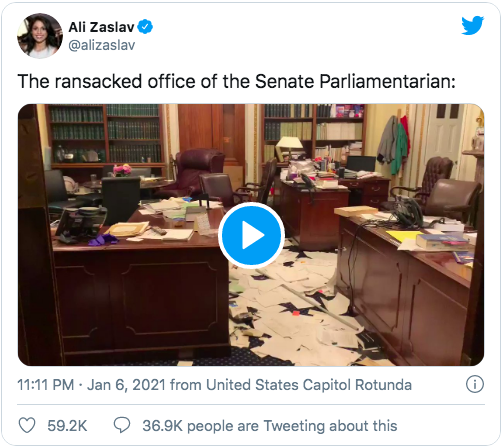 Ask students: Based on what we discussed today, how might this image/this footage, capture the state of American Democracy (or not)?

Based on some of what we discussed today, what are some of the things that you would like to see the new administration of Joe Biden and Kamala Harris address to help strengthen American democracy during their term in office?

Given some of the intense events of the past week and the important issues we discussed today, let’s all take a deep breath together. And another one.

Remind students that taking a few deep breaths can help calm us down when we’re feeling agitated, frustrated, angry, or otherwise upset to regain access to our cortex, the thinking and problem-solving part of the brain. Ask students how are they feeling right now.