This lesson invites students to examine reasons why Americans may not vote, both in the past and in the present. Students will gain a deeper understanding of the struggle for voting rights and will explore why the ability to vote means so much to many Americans.

Elicit or explain that even though there is no presidential election this year, the midterm elections will allow Americans to elect new senators, congressional representatives, and governors, along with many other state and local positions.

Ask students (assuming they are under 18):

Explain that in this lesson, students will explore reasons why Americans may or may not vote.

Voting Rights in the Past

For this section, you will need to print out and cut up one sheet of cards for each group of 3-5 students.

Explain to students that there is a long history of conflict in the U.S. over who should be allowed to vote. Place students in groups of 3-5 and give each group a stack of cards. Some of the cards have dates on them; others have different groups of Americans. Invite groups to match the cards with the groups, creating a timeline of when they think different groups of Americans first gained the right to vote. Note: Some dates are approximate because different states granted rights at different times.

Once groups have a rough timeline, create a class timeline by writing dates in order on the board and asking groups to tape their cards under the year they chose. Ask groups to explain their reasoning, especially when there is disagreement between the groups.

Then point out any major discrepancies between student ideas and the historical record:

Point out that each of these dates represent decades or more of struggle by this group of Americans to gain their right to vote. Ask students to discuss with a partner and then reflect in writing about this question: “Which of these dates for gaining the right to vote is most surprising or meaningful to me personally? Why?” 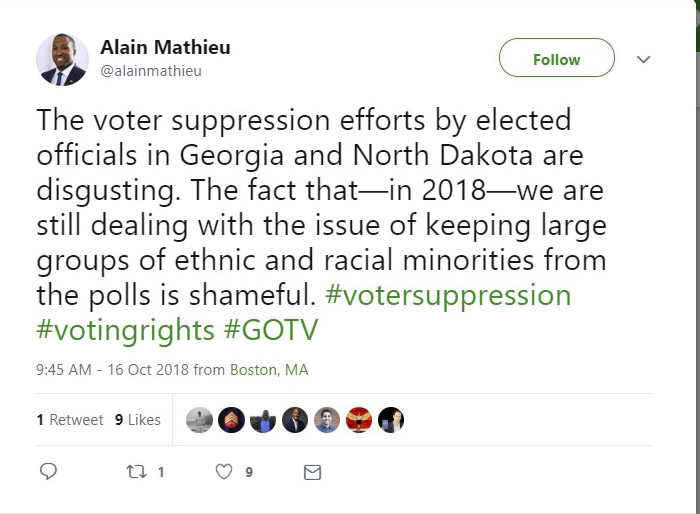 If students have not heard much about these cases, invite them to search on their phones or skim the linked articles below for a few minutes with a partner before sharing. Elicit and explain the following key points:

Invite students to turn and talk with a partner: “How might these changes to voting rules in North Dakota and Georgia affect the results of the election?”

Write on the board: “Why might Americans not vote?”

Ask students to summarize the reasons why people in North Dakota or Georgia might find it difficult to vote in the midterm election. Take notes on the board. (Reasons should include not having the right ID, voter applications being rejected at the last minute, and confusion about who will be allowed to vote.)

Then, ask students to discuss again with a partner and come up with even more reasons why many Americans might not be able to vote or might choose not to vote. Then have students share the reasons, taking more notes on the board. You may wish to share some or all of the following points to give students ideas:

Finally, reflect together on the reasons listed so far. Some may be reasons of not being able to vote, while others may be reasons of choosing not to vote, such as “all politicians are the same” or “one vote doesn’t count.” Ask students to notice that there are different types of reasons on the board, and ask them to describe the difference.

Ask students to write or share in a circle:

Legislators in 19 states have passed laws that weaken a pillar of democracy: the right to vote. Students examine this legislation and efforts by grassroots groups to protect and extend voting rights.

Students collectively gain an understanding of a new monument, the artwork, the artist’s intentions, and some of the history influencing the work.

Students explore the controversy over the Trump administration's proposal to add a question about citizenship to the census —  and learn about the history and purpose of the U.S. census.