Students study facts and statistics about NYC's "Stop and Frisk" policy, and consider different points of view on it using interactive activities.

Ask students (by a show of hands) if they have ever been accused of something they didn't do, or if someone has ever been "suspicious" of them or their intentions.

Have students pair up and respond to the following with their partner (2 minutes each): Share a time you were accused of something you didn't do or a time when someone was suspicious of you for no apparent good reason.   How did you feel?  After the pairs have discussed their stories, have a few students share with the whole class.

Ask students: Have you heard anything about a policy called "Stop and Frisk"? Ask if anyone can come up with a definition.  Present the following definition:

"Stop and Frisk" is a police action to momentarily detain and search the body of a person. Under judicial interpretation of the Fourth Amendment to the United States Constitution, such a search may be conducted only under circumstances where the officer believes that the person is armed and dangerous to the officer's person, or that the person has just committed or is about to commit an unlawful act.

Share the background below, or have students read it:

The U.S. Supreme Court established a legal basis for officers to stop, question, and frisk citizens in its 1968 decision in the case of Terry v. Ohio. In the Terry case, a veteran police officer observed three men engaging in conduct that he concluded might be indicative of "casing" a store, that is, preparing to commit a robbery. When he approached the men to ask them questions, the response from one of them was incoherent. Fearing that the men might be armed, the officer grabbed hold of one of them and "patted" him down. The pat-down revealed that the man was carrying a gun.

The Terry decision permits police officers to stop and detain a person based on a "reasonable suspicion" that s/he might be about to commit a crime or is in the process of committing a crime. It represents a modification of the Fourth Amendment protection against unreasonable searches and seizures granted to private individuals in the Bill of Rights. Prior to Terry, police officers were required to have a higher level of proof, "probable cause," before interfering with the liberty of private persons. Terry stops, as these encounters have come to be called, may be conducted based on far less evidence than that legally required to justify an arrest, but they may not be conducted based on groundless hunches about specific individuals being involved in crime.

On August 12, 2013, a federal judge ruled that the NYC Police Department's stop and frisk policy violated the constitutional rights of blacks and Latinos in the city. The judge, Shira A. Scheindlin, found that police had resorted to a "policy of indirect racial profiling," increasing the number of stops in black and Latino communities. She ruled that under the policy, officers  routinely stop "blacks and Hispanics who would not have been stopped if they were white."  Scheindlin called for a federal monitor to oversee broad reforms, including the use of body-worn cameras for some patrol officers, but said she was "not ordering an end to the practice of stop-and-frisk."  For more information, please see Joseph Goldstein's article in the New York Times.

Read the following statements one at a time and have students decide if they agree (thumbs up), disagree (thumbs down), or are not sure or have mixed feelings/thoughts about it (thumbs to the side).  Ask a few students to share their points of view on each statement.

3. Stop and Frisk gets guns off the streets.

Share the following background information and data on Stop and Frisk. 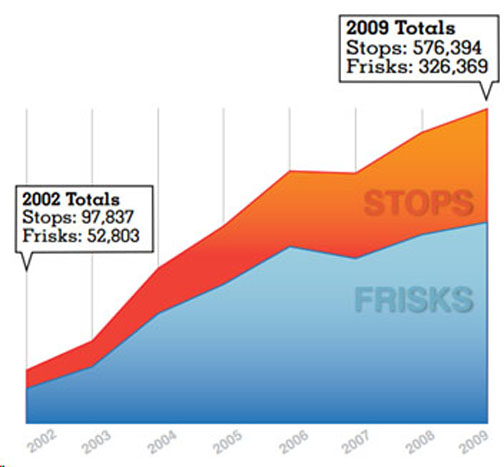 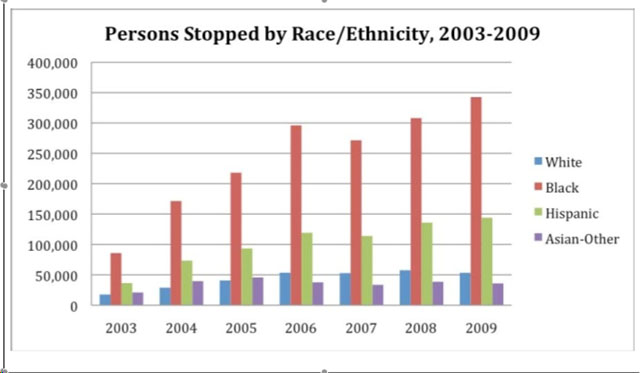 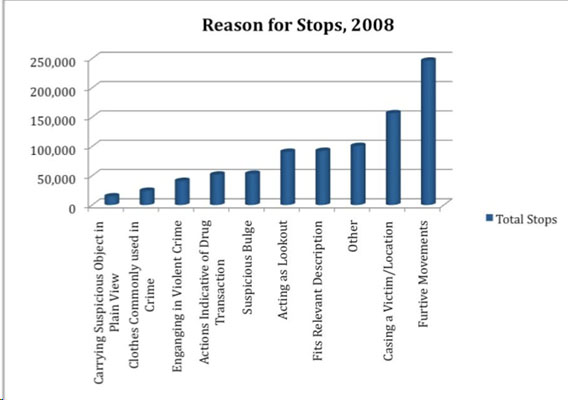 Engage students in the whole class discussion by asking:

Show this 5 minute video clip from Reuters, "Stories of Stop and Frisk"

Distribute the two articles below, each with a different point of view on Stop and Frisk.  Give half the students one article and the other half the other article.

After reading the articles, have a few students give a summary of the article they read, the main idea, point of view expressed, and anything new they learned.  Engage students in whole class discussion by asking:

Have students think about one thing they learned today.  Share a few responses aloud.

WRITING: Write an op-ed or letter to the editor with your point of view on stop and frisk, including evidence, data, quotes, etc. to support your opinion.

MATH: Create an opinion poll to distribute in your school and/or community that asks people's thoughts and feelings on Stop and Frisk. Distribute the survey, collect responses, and analyze the results.

RESEARCH: Conduct research on larger issues of racial profiling and disproportionality in the criminal and juvenile justice systems.  Write a research report that cites evidence, data, and relevant quotes.

ART/MEDIA: Select a point of view on Stop and Frisk and create a public awareness campaign about it, using video for a PSA, infographics, posters, and/or social media (Facebook, Tumblr, etc.) to illustrate your point of view.

R.1  Read closely to determine what the text says explicitly and to make logical inferences from it; cite specific textual evidence when writing or speaking to support conclusions drawn from the text.

R.2  Determine central ideas or themes of a text and analyze their development; summarize the key supporting details and ideas.

W.1 Write arguments to support claims in an analysis of substantive topics or texts using valid reasoning and relevant and sufficient evidence.

SL.2 Integrate and evaluate information presented in diverse media and formats, including visually, quantitatively, and orally.

SL.4 Prepare for and participate effectively in a range of conversations and collaborations with diverse partners, building on others' ideas and expressing their own clearly and persuasively.

Congress has passed and President Biden has signed a new law making Juneteenth a federal holiday. Students learn about and discuss Juneteenth.

Amid a controversy over a plan to provide debt relief to Black farmers, students dig deeply into history to grapple with the question, “Do all farmers matter?”

Students learn about efforts by European nations to ban Muslim face coverings, discuss the impact of these laws, then reflect on the voices of Muslim women on this issue.