Sharing in the wake of Hurricane Maria & other natural disasters

This activity uses a circle to help students process the many disasters that have struck people around the world in the summer and fall of 2017. It includes a more extended process about the post–Hurricane crisis in Puerto Rico. 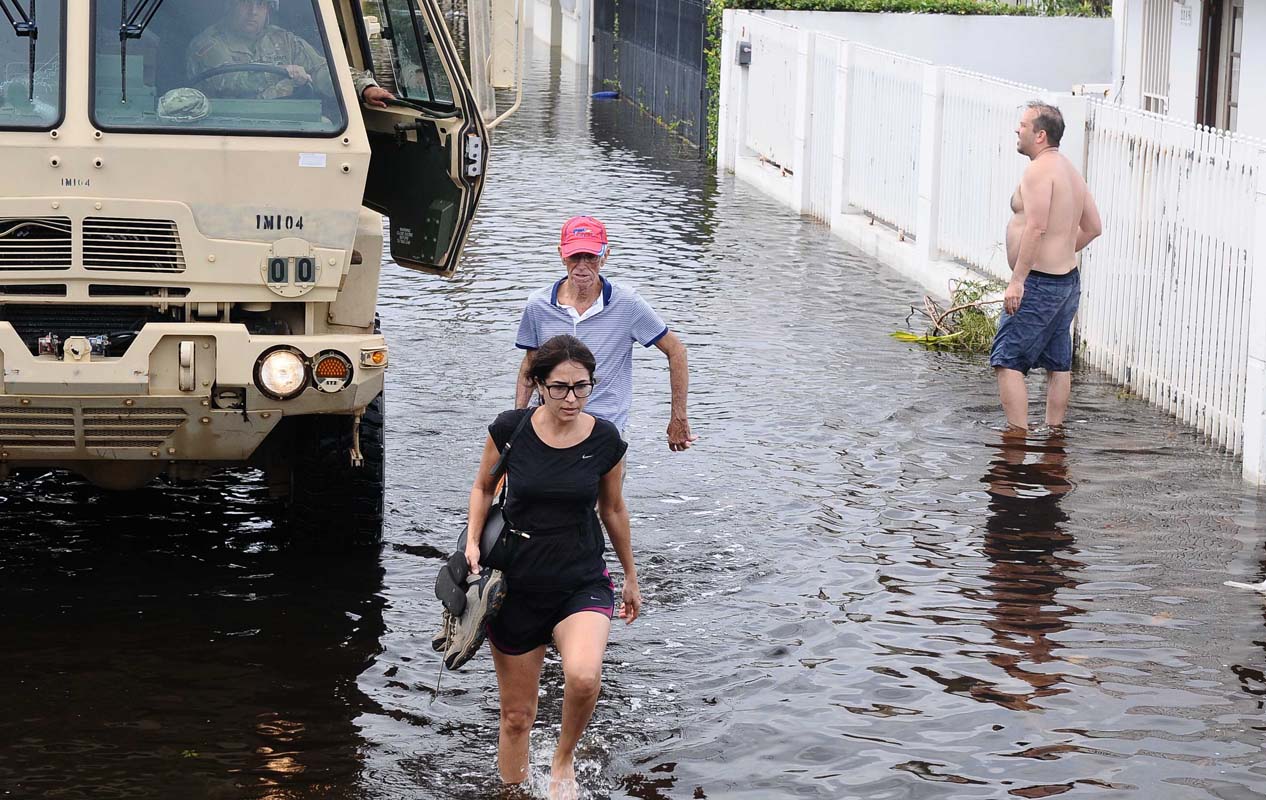 This activity uses a circle process to help students process the many disasters that have struck people around the world in the summer and fall of 2017. It includes a more extended process for students who may be affected by the post–Hurricane crisis in Puerto Rico.

Hurricanes Irma and Maria devastated Puerto Rico, other Caribbean islands, and parts of Florida, in September. Before that, Hurricane Harvey, hit Houston and other gulf areas. Other recent disasters include several major earthquakes in Mexico, one of which collapsed buildings across the capital of Mexico City, and monsoon floods in India, Bangladesh, and Nepal. Toward the end of August, Sierra Leone was inundated by heavy rain, which resulted in a devastating mudslide that swept away thousands of homes. And Typhoon Hato, the strongest such storm since 1968, made its destructive path across China, Hong Kong, and Macau, triggering large ocean swells, submerging streets and destroying buildings.

Read the following poem "Yes" by William Stafford out loud:

It could you know.  That’s why we wake
and look out – no guarantees
in this life

Invite students to reflect on this poem as they think of their own lives and that of their loved ones. Ask them to think about the natural disasters around the country and world we’ve been hearing about it recent weeks and months. Think about the federal response to these disasters (or lack of response), and about how family, friends, and neighbors have responded. Ask them to consider the importance of community in situations like these.

In a go–round (with a talking piece, if you use one), invite student to share some of the stories, thoughts, and feelings the poem brings up for them.

If you have students in your class who are themselves impacted by recent disasters, or who are perhaps impacted by other individually challenging events, note that inviting them to talk and listen to one another can provide a supportive space where they may not feel as alone. Listening and sharing can help us begin to deal with the challenges we are facing.

In follow up go rounds, invite students to share related stories, thoughts, or feelings as well as connections, reflections, or additions to what was shared in the first go round.

Option:  Voices from the News

If students don’t require many go rounds to process the news (perhaps because they are less personally affected), consider focusing in on the unfolding disaster in Puerto Rico, as you invite students to reflect on the following question:

Below are some voices from the news this past week.  Read them to your students or invite some volunteers in the circle to read them out loud:

The administration has continued to defend its handling of the disaster [in Puerto Rico], which has swelled into a humanitarian crisis amid widespread shortages of water and electricity, while local officials and residents alike have continued to plead for basic necessities.  Carmen Yulín Cruz, the mayor of [the island’s capital] San Juan, gave voice to this tension on Friday when she criticized acting Homeland Security Secretary Elaine Duke's assertion that the federal response is "a good–news story in terms of our ability to reach people" and the relatively low death toll. In televised interviews, she said the situation on the island is anything but good news, with people scraping for food, and for their lives.  Cruz delivered what she described as a "mayday" call to Washington in a news conference Friday, decrying federal and local government logistical failures in delivering basic goods to communities across Puerto Rico. She said the federal response has "collapsed," emotionally describing how provincial mayors have tried unsuccessfully to retrieve critical goods from the government command center in San Juan.  "People are dying in this country," Cruz said. "I am begging, begging anyone that can hear us, to save us from dying. If anybody out there is listening to us, we are dying and you are killing us with the inefficiency and the bureaucracy."  (Washington Post)

As of Sunday, fewer than 300 of the island's 1,600 cellphone towers were up and running. Residents cannot communicate with one another or family members in other parts of the world.  "I think that part is worse than not having water and electricity," Maritza Stanchich, a professor of Caribbean studies at the University of Puerto Rico, [said] on a phone call.  Stanchich said she'd driven for hours to get reception. "That is worse — not knowing about your loved ones," she said.  This inability to communicate is putting a strain on all aspects of life on the island, from simple check–ins to emergency assistance. "We can't even text our neighbors to have dinner — of course we can't call 911," Stanchich said.  For the millions of young people accustomed to being connected 24/7, the situation is surreal. Diana Isabel Sotomayor, who is from Puerto Rico but is currently studying at the University of Copenhagen, [said] she did not hear from her parents or grandparents for a week.  "The people that are outside know more than the people that are there," Sotomayor said over Skype. "It's been really emotional because we're not there but we're hearing the worst from the situation — these individual stories of true chaos."  (Business Insider)

Many Puerto Ricans have been dismayed by what they see as an insufficient response from President Donald Trump, who has been largely silent about what Puerto Rico's governor, Ricardo Rossello, has called a humanitarian crisis.  On Monday, the president acknowledged the situation amid a stream of tweets about the National Football League, saying, "Texas & Florida are doing great but Puerto Rico, which was already suffering from broken infrastructure & massive debt, is in deep trouble."  He said on Tuesday that Puerto Rico's situation was much more difficult to handle than one in Florida or Texas ...  "It's the most difficult job because it's on the island, it's on an island in the middle of the ocean," Trump said ... "It's out in the ocean — you can't just drive your trucks there from other states."  Sotomayor has been one of many Americans voicing frustration with Washington's response.  "Our president is tweeting about the NFL, ... "But actually, 3.4 million US residents live there. People don't really grasp that it's home for us."  (Business Insider)

Trump has underscored the challenges involved in the recovery, highlighting praise he has received from local officials and disparaging the news media for its coverage. He has also referenced conditions that existed in Puerto Rico before the storm and mentioned the expected cost of the rebuilding effort.  "Ultimately the government of Puerto Rico will have to work with us to determine how this massive rebuilding effort ... will be funded and organized, and what we will do with the tremendous amount of existing debt already on the island," Trump said during a speech Friday.  Trump repeatedly asserted that his administration was facing unprecedented challenges in responding to a storm "of historic and catastrophic severity" and described Puerto Rico as "an island surrounded by water — big water, ocean water."   His remarks about Puerto Rico stand in stark contrast to the way he responded to hurricanes Harvey and Irma in Texas and Florida.  ...  Melissa Mark–Viverito (D), speaker of the New York City Council and a native of Puerto Rico, said Trump was treating Puerto Ricans as "second–class citizens." She visited the island earlier this week; her mother still lives there.  "There is a double standard of how Puerto Ricans are being treated," she said ... after Trump tweeted a message discussing the potential recovery cost.  (Washington Post)

Read the following quote out loud:

Despite the dire circumstances, people are coming together to find joy and relief where they can.  After a nighttime curfew was imposed in [the capital] San Juan, Stanchich said she saw people crowded around to listen and dance to some live music that broke out on the spot.  "We're breathing," she said. "Everybody's doing their best."  [Puerto Rican–born Diana Isabel] Sotomayor said she had also been astounded by the messages of hope and resilience she saw seen on social media. Puerto Ricans both on and off the island are sharing information to help deliver aid and respond to emergencies. ... "The 'diasporicans,' as we call ourselves, have been the ones connecting people and connecting news across towns," Sotomayor said. "I think for the first time the diaspora has really created this really powerful network to engage in a meaningful way."  (Business Insider)

Invite students to think back to the poem we started our circle with today.  To close out the circle today invite students to connect the second part of the poem about "no guarantees in this life, but some bonuses, like morning, like right now, like noon, like evening" to the quote you just read.

Invite students to share a bonus in their lives.

If students express interest in helping people in Puerto Rico, explore options with them.  Some suggestions for ways to help are listed here.

Air travel is becoming one of the worst contributors to climate change. In this activity, students read about and discuss the impact of air travel on the climate crisis and what we should do about it - personally and as a society.