Students learn about and discuss the remarkable success of an organization of farmworkers that is fighting abuse and demanding dignity on the job. The activity includes two short videos, discussion, and a reading.

Invite students to stand up if the following statements apply to them. If your students are differently abled, consider doing this activity by inviting students to raise their hand or find another way for all students to be able to participate in this activity.

Ask students if they know how all these statements are connected?

Explain that in today’s lesson we’ll be looking at the plight of immigrant farm workers in Immokalee, an impoverished farm town in southern Florida that has, for decades, been a leading producer of fresh market tomatoes in the United States. Immigrant farm workers often work under horrific conditions. This was most certainly the case in Immokalee before the Coalition of Immokalee Workers set out to change that.

The Coalition of Immokalee Workers (CIW) is a worker-based human rights organization that has been internationally recognized for its efforts to promote social responsibility and stop human trafficking and gender-based violence at work. It began in 1993 as a group of farmworkers organizing to improve their conditions. In 2000, this organizing was reinforced with the creation of a national consumer network of people concerned about the conditions under which their food is produced. Since then, CIW’s work has steadily grown, and includes addressing worker conditions and worker rights not only in Florida,  but in states including Georgia, South Carolina, North Carolina, Maryland, Virginia, and New Jersey.

Today’s lesson will focus on the organization’s Fair Food Program, launched in 2011. 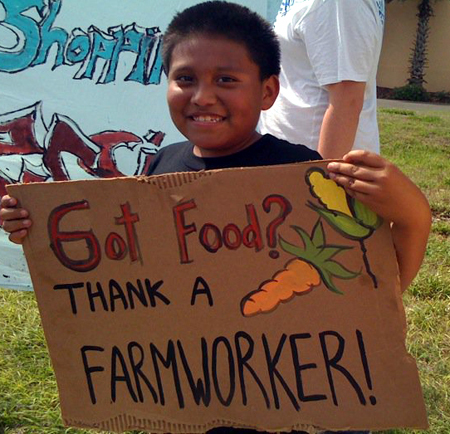 Photo: CIW and their allies march in Florida in 2011. Photo by the National Farm Worker Ministry.

Line up the first video, CNN’s “Freedom Project - Ending Modern-Day Slavery,” about the Fair Food Program.  Explain that the video can be broken up into two parts.  Part 1 tells the story of migrant farmworker Alexandrina and the abuse of farmworkers. Part 2 talks about the work of the Fair Food Program in Immokalee to combat abuses in agriculture.  Ask students to take notes about what stands out for them in both parts of the video.

After watching the video, ask students to turn to a neighbor to discuss their thoughts and feelings about it.  What stood out for them?  How did they feel about it?

Next bring students back together and open up the discussion as a full group. Ask students to share what stood out for them about the video.  Continue the discussion using some or all of the following questions:

Line up another video from the same CNN Freedom Project series.  This one is called Fighting Modern Day Slavery on Florida Farms.  Explain that this video focuses specifically on the Coalition of Immokalee Workers, its history and its current focus.  Again invite students to take notes as they watch the video, this time focusing on the different ways in which CIW fights to improve working conditions of migrant farmworkers.

Again, having watched the video, ask students to turn to a neighbor to discuss their thoughts and feelings about the video.  What stood out for them in this video?  How did they feel about it?

Next bring students back together and open up the discussion as a full group, asking them to share what stood out for them about this video. Continue the discussion using some or all of the following questions:

Invite students next to read this pdf handout about the various strategic actions CIW used to put pressure on those who wielded power in the tomato supply chain.  (The handout material is also included at the bottom of this lesson.)

Back in their small groups, or as a full class, discuss the handout using some or all of the following questions:

Invite students to share: If you were to forget everything else you learned today, what is one thing you’d like to hold on to or remember?

What is a cause or an injustice in your community that you could see yourself wanting to organize around?

Handout:  How did CIW win?

The Coalition of Immokalee Workers (CIW) began organizing in 1993 as a small group of workers meeting weekly in a room borrowed from a local church to discuss how to better their community and their lives (for more background, check out Facts & Figures about Farmworkers).  Combining three community-wide work stoppages with intense public pressure – including an unprecedented month-long hunger strike by six members in 1998 and an historic 234-mile march from Ft. Myers to Orlando in 2000 – the CIW’s early organizing ended over twenty years of declining wages in the tomato industry.

By 1998, farmworkers had won industry-wide raises of 13-25% (translating into several million dollars annually for the community in increased wages) and a newfound political and social respect from the outside world. Those raises brought the tomato picking piece rate back to pre-1980 levels (the piece rate had fallen below those levels over the course of the intervening two decades), but wages remained below poverty level and continuing improvement was slow in coming….

In 2001, having won some wage increases for Florida tomato pickers and investigated some of the country’s earliest cases of modern-day slavery, the CIW did a deep analysis of the industry to understand where the power to make true systemic change resided. It became clear that the corporate food industry as a whole – and companies such as current CIW campaign targets Kroger and Publix in particular  – purchased a tremendous volume of fruits and vegetables, leveraging its buying power to demand the lowest possible prices from its suppliers, in turn exerting a powerful downward pressure on wages and working conditions in these suppliers’ operations.

With this realization, the Coalition turned a new page in their organizing, launching the first-ever farmworker boycott of a major fast-food company – the national boycott of Taco Bell – calling on the fast-food giant to take responsibility for human rights abuses in the fields where its produce is grown and picked. Over its four years, the Taco Bell boycott gained broad student, religious, labor, and community support. In March 2005, amidst growing pressure, Taco Bell agreed to meet all of the CIW’s demands to improve wages and working conditions for Florida tomato pickers in its supply chain.

Following the successful conclusion of the Taco Bell boycott, the national network of allies that had helped carry that campaign to victory consolidated into key allies organizations, the Student / Farmworker Alliance and Interfaith Action, signaling to the corporate food industry that the Campaign for Fair Food would not stop at Taco Bell. The Fair Food ally organizations became a powerful new voice for the respect of human rights in this country’s food industry and for an end to the relentless exploitation of Florida’s farmworkers.