Students consider our 10% unemployment rate from a numerical, social and emotional perspective, including through photos from the Great Depression.

(1 minute)
Explain that today's lesson will deal with unemployment (joblessness) through a variety of activities.

Introduce the lesson by drawing on some of the students' word associations and talking about the severity of the unemployment situation in the US today: More than 7 million Americans have lost their jobs since the recession began two years ago. As of December 2009, 10% of Americans were officially unemployed—a figure that President Obama called "staggering." What's more, the 10% number doesn't include those who have stopped looking for work or have settled for part-time employment when they wanted to work full-time. If these people were included in the numbers, the unemployment rate would reach 17.5%
So what do these numbers really mean? Ask your class to imagine that they represent the entire US population available for work. Assuming your class represents 100%, how many students would be unemployed if you used the government's statistic of 10%? What about if you used the broader measure of unemployment at 17.5%? When your class has worked out the number of students at 10% and 17.5% ask them to show it visually by having first 10% of your class stand up and then adding the additional 7.5%.
Ask students to look around and share what they think about these numbers. What do they think the impact is on a) the country b) communities, and c) individuals?

Tell students that the current recession has brought back memories and references to the Great Depression of the 1930s. In fact, this recession is by several measures the worst since the Depression.
Ask students: What do students know about the Great Depression?
Share with them that the Great Depression was a worldwide economic crisis in the decade before World War II. Like today's recession, the Great Depression originated in the United States. It started with the stock market crash of October 29, 1929, and spread quickly, with devastating effects. Cities around the world were hit, especially those dependent on heavy industry. Construction practically came to a halt. Farming and rural areas suffered as well, as crop prices fell by approximately 60%. As international trade plunged, so did personal income, tax revenue, profits and prices.
A general loss of faith in the economy led to reduced levels of spending and demand, which contributed to the downward spiral. In the US alone unemployment went up to almost 30%. Breadlines stretched for blocks. There was a run on the banks and many financial institutions failed. In most countries the negative effects of the Great Depression continued for a decade until World War II.
Ask your students to consider some or all of the following photographs (either online or by printing them out for students to look at). The photographs are taken from the Franklin D. Roosevelt Library, courtesy of the National Archives and Records Administration. They are images of the Great Depression. 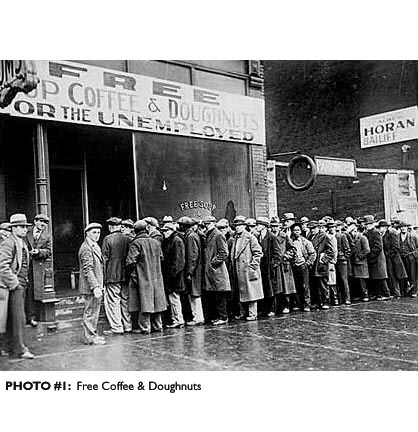 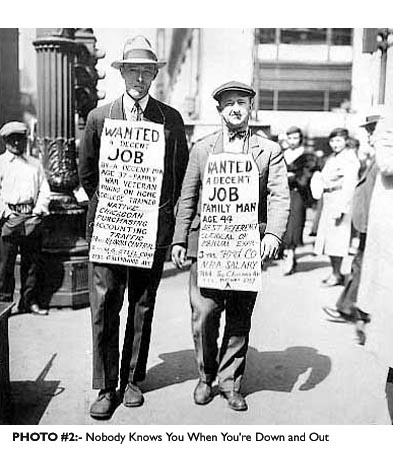 Consider using some or all of the following questions to get students talking about the photos:
Additional Great Depression photographs for your students to consider can be found at: http://history1900s.about.com/od/photographs/tp/greatdepressionpictures.htm The collection includes pictures of the dustbowl, which forced many farmers from their land and of migrant workers - people who had lost their jobs or farms and traveled in search of new work.

In his speech to the nation on December 8, 2009, President Obama stated: "We avoided the depression many feared" but "our work is far from done." Obama called for an additional burst of federal spending to jolt the wobbly economy into a stronger recovery and reduce persistent double digit-unemployment.
Republicans criticized the president, saying his proposal would further increase the U.S.'s large federal deficit. But some progressives argued that his proposal didn't go far enough (http://progressive.org/node/138424/2570).
President Obama proposed new spending for highway and bridge construction, for small business tax cuts and for retrofitting millions of homes to make them more energy-efficient. He said he wanted to extend economic stimulus programs to keep unemployment insurance from expiring for millions of out-of-work Americans and to help laid-off workers keep their health insurance. He proposed an additional $250 apiece in stimulus spending for seniors and veterans and aid to state and local governments to discourage them from laying off teachers, police officers and firefighters.
Ask students: What do you think about the government spending money to help boost the economy through job creation?

Ask a few volunteers to ask one thing they learned from today's lesson.
Alternatively, do the same word association you started the lesson with to see if anything shifted for the students as a result of today's lesson.

According to the Library of Congress website:
"The photograph that has become known as 'Migrant Mother' [photo #5] is one of a series of photographs that Dorothea Lange made of Florence Owens Thompson and her children in February or March of 1936 in Nipomo, California. Lange was concluding a month's trip photographing migratory farm labor around the state for what was then the Resettlement Administration. In 1960, Lange gave this account of the experience:
"'I saw and approached the hungry and desperate mother, as if drawn by a magnet. I do not remember how I explained my presence or my camera to her, but I do remember she asked me no questions. I made five exposures, working closer and closer from the same direction. I did not ask her name or her history. She told me her age, that she was thirty-two. She said that they had been living on frozen vegetables from the surrounding fields, and birds that the children killed. She had just sold the tires from her car to buy food. There she sat in that lean- to tent with her children huddled around her, and seemed to know that my pictures might help her, and so she helped me.'"
Ask students to step into the shoes of either the mother or one of the children in the photograph and write a paragraph or poem their experience, based on some of the dialogues in your class today.

This lesson was written by Marieke van Woerkom for TeachableMoment.Org, a project of Morningside Center for Teaching Social Responsibility. We welcome your comments. Please email us at: info@morningsidecenter.org

The economy is growing. Why aren’t people feeling it?  This lesson has students examine whether the way economists measure the health of the economy actually reflects the reality Americans experience. Students explore alternative measures that some countries and states have begun to adopt aimed at better capturing the real conditions of everyday people.

Students read President Johnson's March 1964 speech to Congress outlining the War on Poverty and, in small groups, use a graphic organizer to explore how values of justice and equity were translated into policies and programs. They consider: What beliefs led to declaring a war on poverty? And what actions did the President propose to fight that war?

Benefits have just been cut for the one in seven Americans who receive food stamps, and more cuts may be on the way. In two readings, students learn about the debate over food stamps and the effect of cuts, and compare the US approach to hunger to that of other countries.