I Stayed Silent When I Saw Racism. No More.

On one hand, as a white person, I know I have an opportunity and an obligation to interrupt. But I also have the trepidation of entering into something uncomfortable that I’m not entirely prepared for.

About 30 years ago I took a course in CPR. It was a brutally hot summer, and shortly after I was certified, I was faced with three people, in short succession, collapsing on the NYC streets in front of me. In the end, none of them needed CPR, but for a long time, I walked around with a mixture of resolve and dread.

That’s very much like what I feel when faced with someone who says something racist. On one hand, as a white person, I know I have an opportunity and an obligation to interrupt, but I also have the trepidation of entering into something uncomfortable that I’m not entirely prepared for. 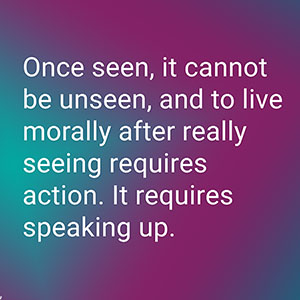 That discomfort kept me silent for a long time. This was especially true in my time teaching high school English. I remember the half heard comments in the classroom that I dismissed because I convinced myself I wasn’t sure what had been said, although by the other kids’ reaction, I should have known it was harmful.

I think back to times in my teaching when conversations about race came up and began to get heated, and I shut them down. I told myself that I was concerned about the safety of my students of color but in fact, it was my own comfort that I cared about.

I recall comments in the lunchroom, when teachers spoke disparagingly about students of color—their level of effort, their bad behavior, the idea that the parents didn’t care—all the stereotypical comments. I stayed silent, convincing myself that they were speaking about individual students not about a group. But I was wrong. All those moments of silence represent harm. Silence can be a form a violence too.

And I remember how the Black educators in my building stayed in their classrooms and avoided lunchroom and break room conversations in order to minimize the daily dose of microaggressions and comments about students of color.

I stayed silent because I did not want to cause discomfort—mine or others’. I did not want to jeopardize my relationships or my sense of belonging. I did not want to have conflict in my life or to be embarrassed. I worried that I didn’t know exactly what was problematic about what they had said, or that I wouldn’t have the right words.

That has been changing. My watershed moment occurred at a lecture by a well-known sociologist. Within the first fifteen minutes of his presentation, he used just about every racist stereotype of Black people. Black people as crack dealers. Black people living in broken down public housing, Black youths roaming in packs. My colleague and I looked at each other to see if we were really hearing this right and then quickly decided to leave.

We stood outside in the biting December cold and talked. I saw how it had affected my co-worker, who is a Black man, and I understood for the first time that it would be wrong for me to leave it up to him to say something, and it would be wrong to leave without saying something. As much as I did not want to go back in I knew I had to. And I did.

Since then I have become more determined to consistently interrupt. I’ve also come to be grateful when someone interrupts me. I still have racist views; I will never “get over” the socialization I’ve had. But when I’m aware of what I’ve said, it helps to rid me of some of the poison. That personal, ongoing work is essential. The only way to be prepared to interrupt is to have looked inward first.

With time I’m also becoming more comfortable speaking up. This summer, I was conducting a training of school staff for Morningside Center for Teaching Social Responsibility. A teacher stated that she never notices her students’ race. I knew what that really meant: She didn’t want to talk about race, and she was hurting her students by not truly seeing them, their culture, their experiences. This time the words to interrupt were there, and I tried to show her the harm in what she had said.

I’m also trying to convince all the white people around me to speak up. Silence is acceptance. Silence is complicity. Change happens in lunchrooms and living rooms as much as in the streets. If we pass up the chance to give someone a new way of thinking, we will never be able to dislodge the viselike grip of white supremacy. If I can help the white people around me see how brutally unjust our systems are, it will eventually become intolerable to them, as it has become to me. Once seen, it cannot be unseen, and to live morally after really seeing requires action. It requires speaking up.

I wish I could have told my teachers about the microaggressions I was experiencing, but children don’t have the words to talk about racism until they’re taught them.
Racism
Asian
Asian American
Our long-time colleague Liz Young shares stories about her own experience as an Asian-American woman in the U.S. in this 10-minute video.
Racism
Sexism
Asian American
Centering diverse cultures can strengthen community and sense of belonging for everyone, writes Morningside Center staff developer Nicole Lavonne Smith.
Black Lives Matter