Students learn about the cyclone that devastated the Pacific nation of Vanuatu on March 14, 2015, and how it relates to climate change, then send a message to Vanuatu's UN representative. 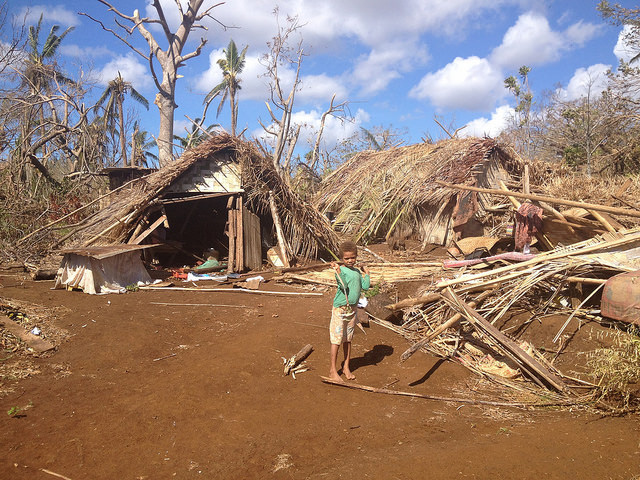 Show students the photo above, which was taken in the Pacific nation of Vanuatu on March 18, 2015. (Photo credit EC/ECHO)

Ask students if they have heard about what happened here.   Do they have a guess, based on the picture?

The cyclone that hit the island nation of Vanuatu on March 14, 2015, was one of the worst storms to ever hit the Pacific. With wind gusts approaching 200 mph, Cyclone Pam devastated the tiny country spread out over 83 islands in the South Pacific Ocean. The destruction was enormous: Vanuatu's Prime Minister Joe Natuman estimated that 50-90% of all homes were damaged or destroyed. Tens of thousands of Vanuatu’s 260,000 citizens are homeless and food supplies are critically low.

While food and shelter are immediate and urgent concerns, the rare Category 5 cyclone has also reminded the rest of the world that island nations are especially susceptible to the impacts of climate change.  At a 2014 UN gathering, Vanuatu Prime Minister Natumen said that his country’s "very existence" was at risk because of climate change (which results mostly from greenhouse gas emissions by wealthy countries over many decades).  Natumen pledged that Vanuatu was committed to developing its own small economy in an equitable and sustainable way, and he called for a "transformative and inclusive agenda" that would address the dual challenges climate change and poverty across the world.

Climate scientists are usually hesitant to say that particular weather events are caused by global climate change. They are almost unanimous, though, in stating that climate change is making severe weather worse. Droughts are longer, storm surges are bigger and hurricanes more powerful. MIT professor of atmospheric science Kerry Emanuel recently reported his findings that storms in the vicinity of Vanuatu are increasing in maximum wind speed almost 5 mph every decade.

In addition to more severe storms, which of these effects of climate change are hurting small islands?

Ask students to think about what they'd like to say to (or ask), Vanuatu's representative to the United Nations. Have the students write their comments or questions, collect them and send them to:

At this pivotal global summit on climate, young people are making their voices heard. In this activity, students discuss COP26 and urgent youth-led demands for action.