Edna Chavez, a 17-year-old senior from South Los Angeles, made an impassioned speech about gun violence at the student led March for Our Lives in March 2018. In this lesson, students learn some background about South L.A. and consider Chavez's speech, which puts gun violence in a larger societal context.

Project the wordcloud below on the white board or print it out and distribute, or distribute the image on this handout.

It is made up of hashtags connected to the fight against gun violence that has been spearheaded by students around the country. 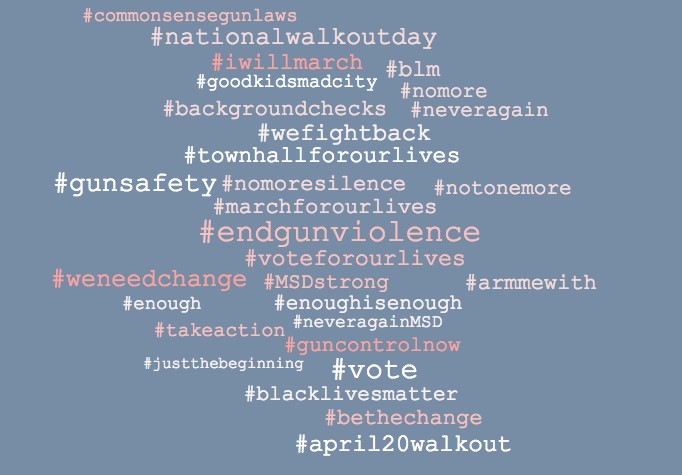 Invite students to look at it in silence for a minute or so.  As they take in the wordcloud, ask students to pick a hashtag that resonates with them.

In a go-round (using a talking piece if that is your practice), invite students to share the hashtag they picked with the rest of the class and explain why.  If you are doing this activity as a restorative circle, this opening ceremony could easily provide enough material to build the rest of the lesson on, as you send the talking piece around several more times to elicit “reflections, connections and additions” to what was shared in the first round.

The hashtags relate to the student movement that spread across the country after a shooting at Marjory Stoneman Douglas High School in Parkland, Florida, killed 17 people on February 14, 2018. On March 24, 2018, students organized a massive March for Our Lives in Washington, D.C. and around the country.

Students have also planned a national school walkout on April 20, 2018, the 19-year anniversary of the Columbine High School shooting. This shooting in Colorado was at that time the deadliest school attack in U.S. history, with 13 people killed.  Since then even more deadly shootings occurred at Sandy Hook Elementary School in Connecticut and at Marjory Stoneman Douglas High School.  Students who are interested in participating in the April 20th events against gun violence can get more information at:  https://www.nationalschoolwalkout.net/

Explain that in today’s lesson we’ll be hearing from one of the speakers at the March for Our Lives in Washington, DC, on March 24, 2018.

Ask students if they’ve ever heard the name Edna Chavez.  Elicit and explain the following (or have students read this information in this pdf handout.)

Edna Chavez is a 17-year-old senior at Manual Arts High School in South Los Angeles.  She is a youth leader who spoke at the March for Our Lives on March 24, 2018. She is Latina and a survivor of gun violence.  Ask for a show of hands of students who have seen/heard her speak either in person or online.

Ask what students know about the area Edna is from, called South Los Angeles. Elicit and explain that South Los Angeles (formerly known as South Central) is a region south of the 10 freeway in Los Angeles, that is comprised of 25 neighborhoods.  The area gained national attention in 1965 and again in 1992 for the racial tensions that erupted into rebellion and violence at both times.

In 1965, the Watts Rebellion, also known as the Watts riots, broke out in the predominantly black Watts neighborhood of South L.A.  Racial tensions reached a breaking point after two white policemen pulled over a black motorist suspected of drunk driving.  A crowd gathered to watch what they saw as yet another racially motivated arrest, in a neighborhood where profiling was the norm. After years of economic and political isolation, frustration and anger spilled over into the unrest and violence that, within five days, would spread to encompass a 50-mile area of South L.A. The violence left 34 dead, 1,032 injured, and close to 4,000 arrested and caused $40 million of property destruction.

Twenty seven years later, in 1992, South L.A. still mostly poor, isolated and targeted disproportionately by police violence, erupted again after a jury acquitted three white and one Mexican-American police officers in the brutal beating of black motorist Rodney King. The beating, captured on amateur videotape, was the first of its kind to go viral in the pre-internet age.  It sparked a national debate about police brutality and, at the intersection where King was beat up, ignited South Central’s racial tensions once more.

Outrage fueled the fiery protests that spread to encompass 32 miles, from the Hollywood Hills to Long Beach. More than 10,000 national guard troops were brought in over the next five days.  The violence that came to be known in the mainstream as the LA riots, resulted in more than 50 deaths, around 10,000 arrests, and more than $1 billion in property damage.

Explain that you’ll be showing Edna Chavez March for Our Lives speech next. Invite students to take notes as they listen to Edna’s experience, and what she says about her community of South Los Angeles.

If you’re not able to show the video or feel that having your students hear her words read in class will work better in your classroom, then either read her speech out loud; have a student volunteer read her speech out loud; or cut up her speech into the 21 segments (in this pdf handout and also below), put them in an envelope, and send the envelope around the circle to have students draw a segment to read out loud.

At the end of the speech (read in whatever way), ask students to discuss some or all of the following questions:

Edna Chavez’s speech was described in the media as emotional, impassioned and inspiring.

As she returned home to South L.A., Edna shared of her participation in the historic Washington March: “It was a really emotional experience, but it was also a very beautiful and great experience. This has empowered me a lot, it has empowered all of us."

Chavez’s fellow student Nathaniel Belteton added: “South L.A.'s voice was heard nationally, Chicago's voice was heard nationally, low-income communities were heard on a national level, so change is on the rise."  Chavez said the next step was getting more resources into the communities that need them the most. "The mental health resources, the mentorship programs, the job opportunities and paid internship programs – that's what's needed in South L.A.," she said. ABC News reported: “Chavez and the other teens say they are committed to fighting for change, saying lives depend on it.”  (ABC 7 eyewitness news)

What does hearing Edna and Nathaniel call for change in their low-income communities bring up for you?  Share a thought, feeling, wish or action that you’d like to contribute to the struggle for safer communities.

Edna Lizbeth Chavez Speaks at the Washington March for our Lives

At Community Coalition, we organize high school students to develop their leadership skills in order to push for educational justice in our communities. That’s why I got involved. I wanted to impact policies and make sure our voices are heard.

I am a youth leader. I am a survivor. I have lived in South L.A. my entire life and have lost many loved ones to gun violence. This is normal, normal to the point that I have learned to duck from bullets before I learned how to read.

My brother, he was in high school when he passed away. It was a day like any other day, sunset going down on South Central. You hear pops, thinking they’re fireworks. They weren’t pops. You see the melanin on your brother’s skin turn gray. Ricardo was his name.

I lost more than my brother that day. I lost my hero. I also lost my mother, my sister and myself to that trauma and that anxiety.

If the bullet did not kill me, that anxiety and that trauma will. I carry that trauma everywhere I go. I carry it with me in schools, in class, walking home and visiting loved ones.

I am not alone in this experience.

For decades, my community of South Los Angeles has become accustomed to this violence.

How can we cope with it, when our school district has its own police department? Instead of making black and brown students feel safe, they continue to profile and criminalize us.

We should have a department specializing in restorative justice. We need to tackle the root causes of the issues we face, and come to an understanding on how to resolve them.

Question: How many more children have to die so that this problem is finally acknowledged?

Policymakers, listen up. Arming teachers will not work! More security in our schools does not work!

Zero-tolerance policies do not work!

They make us feel like criminals. We should feel empowered and supported in our schools.

Instead of funding these policies, fund mentorship programs, mental health resources, paid internship and job opportunities.  My brother, like many others, would have benefited from this.  So let’s make it happen.

It’s important to work with people that are impacted by these issues.

We need to focus on changing the conditions that foster violence and trauma. And that’s how we will transform our communities and uplift our voices.

This has not, and shall not, stop us. It has only empowered us.

Mi nombre, my name, is Edna Lizbeth Chávez. Remember my name. Remember these faces. Remember us and how we’re making a change. La lucha sigue [the fight continues] Gracias y bendiciones [thank you and blessings].

After a series of deadly shootings this summer, lawmakers and 2020 presidential contenders are shining an intense spotlight on the issue of gun control. In this activity, students read about and discuss where President Trump and Democratic presidential candidates stand on the issue, and the role of youth activism in bringing it to the fore.

This series of lessons helps students (grades 3-5) learn about why is climate change is happening, why it matters, and what they can do about it.