Students hear the performance of Lin–Manuel Miranda's song "Almost Like Praying," a benefit for the people of Puerto Rico after Hurricane Maria devastated the island. Students discuss the song, see a video about how others have responded to the ongoing crisis in Puerto Rico, and consider how they might use their own talents and strengths to help.

Show the following tweet by printing it out or projecting it on the screen for all to see. 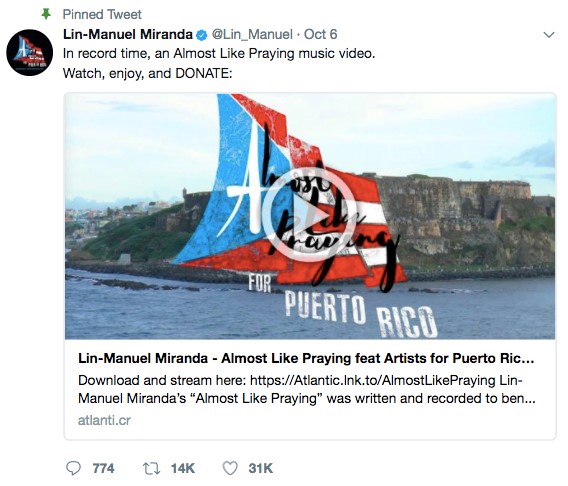 Elicit and explain that Puerto Rican American actor Lin–Manuel Miranda is best known for creating and starring in the hit Broadway musicals Hamilton and In the Heights.

In the weeks after Hurricane Maria struck the island of Puerto Rico on September 20, 2017, Miranda worked tirelessly to raise awareness about the hurricane’s devastating impact and to get people to donate time, money, and supplies to help the island’s people. As of mid–October, few of Puerto Rico's 3.4 million people had electricity, and many struggled to find clean water, food, shelter, and medical care. Recovery is expected to take years.

Miranda openly criticized the U.S. government’s lack of response to the unfolding crisis in Puerto Rico, which is a territory of the United States, and whose residents are American citizens. In a headline–making tweet, Miranda even told President Trump that he was "going straight to hell" after the president attacked the mayor of San Juan (the island’s capital and largest city) rather than focusing on relief efforts.

Proceeds from Miranda's song will benefit the Unidos Disaster Relief Fund.The fund is managed by the Hispanic Federation, a leading Latino nonprofit organization with experience in providing disaster–relief assistance to Latinos in the U.S. and Latin America. According to the organization, all money collected through the Unidos Fund will "help hurricane victims and the recovery efforts through fellow community and civic organizations in Puerto Rico." The aim is to help Puerto Rico "address both the immediate emergency relief needed as well as the long–term need for major infrastructure investment, including hardening the island's electric grid to be able to withstand future severe weather."

Play Almost Like Praying.  The song’s lyrics name the 78 towns and municipalities in Puerto Rico. Miranda said the verses were inspired by all the people who sent out messages on social media after the hurricane, hoping to find their friends and family.

Ask students to reflect on the song and video by asking some or all of the following questions:

Discuss the video using some or all of the following questions:

An alternative, shorter video (4:32 min) to consider playing can be found at the end of this USA Today article:  https://www.usatoday.com/story/life/entertainthis/2017/10/06/lin–manuel–miranda–puerto–rico–trump–and–his–song–hurricane–relief/734878001/

Use the same questions to debrief the clip.

Drawing on Our Strengths to Help

Lin Manuel Miranda and other performers used their skills and connections to support the people of Puerto Rico in a way that drew on their strengths. The people in the video did the same.

Consider playing the song the song Almost Like Praying again.  Invite students to share one thing they’re grateful for in their lives.

At this pivotal global summit on climate, young people are making their voices heard. In this activity, students discuss COP26 and urgent youth-led demands for action.