Labor Day 2018: Unions and the Battle for Equality

Is labor on the ropes? In this lesson students learn about and discuss how unions reduce inequality, labor’s losses in recent decades, and the current signs of a resurgence. 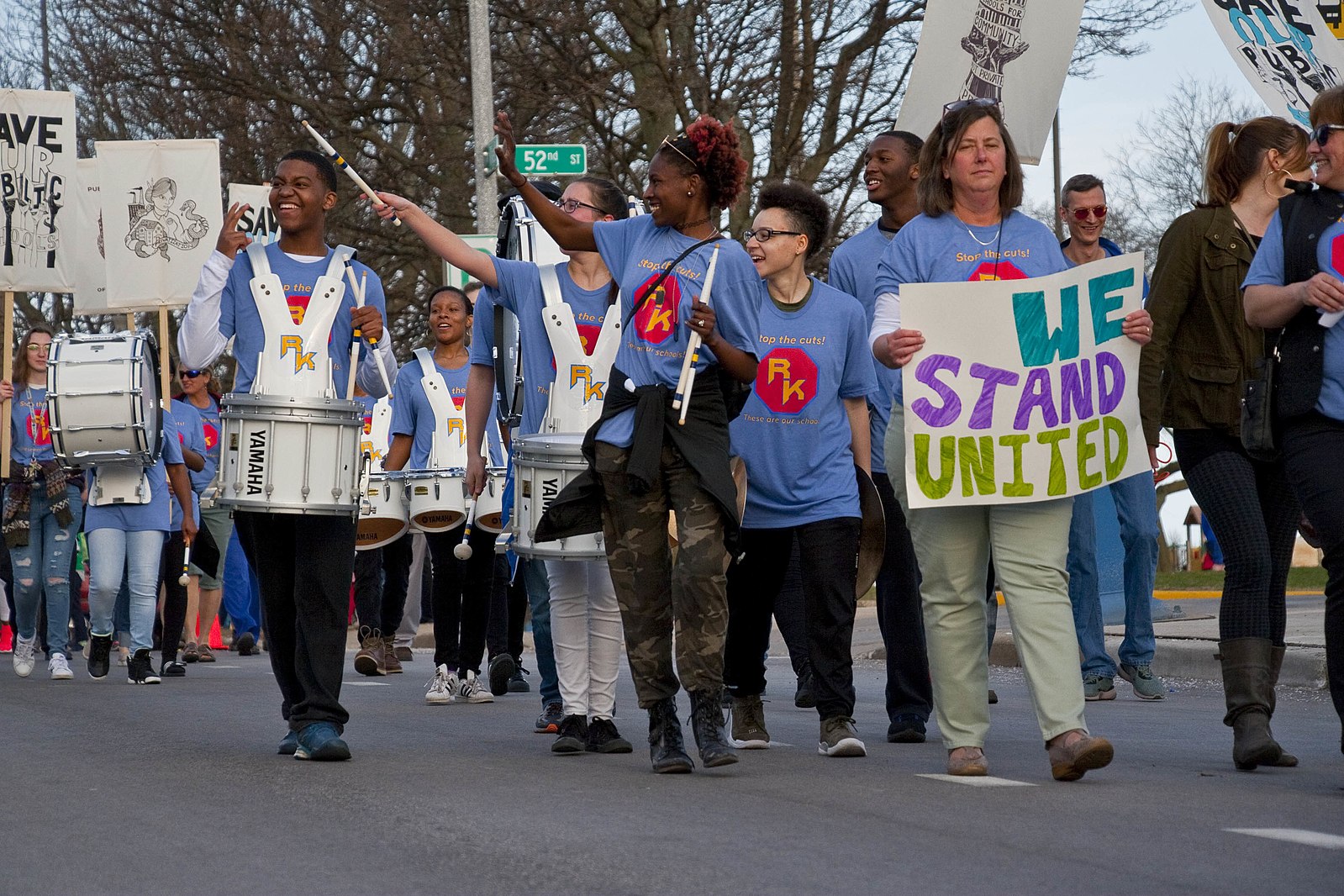 Over the last four decades, the United States has witnessed a dramatic expansion of economic inequality. While real wages for working people have been mostly static, the wealth and income of the top one percent have skyrocketed. During this same period, the percentage of American workers who belong to a union has sharply decreased. Are these two trends connected? Many policymakers, historians, and labor advocates believe so, pointing to the historic role of organized labor in fostering the growth of the American middle class in the middle of the 20th century.

Yet, in spite of these difficulties, working people continue to stand up – as demonstrated by a wave of teachers’ strikes in early 2018. This surge of renewed militancy, combined with the emergence of new and promising forms of worker organization, may yet pave the way for greater economic equality in the United States.

This lesson will examine the connection between the declining fortunes of American labor unions and the growing gap between the very rich and the rest of society. The first reading will explore the historical connection between the labor movement and a healthy middle class. The second reading will review prospects for reversing the trend toward greater inequality, considering a number of recent developments that point to the potential revitalization of labor organizing.

Reading One: The Decline of Unions and the Growth of Inequality

Historically, workers have often joined together to form organizations—called labor unions—capable of protecting them on the job, advancing their political interests, and allowing them to negotiate collectively with employers. Unions, including union staff, are supported through dues from union members. Union members generally elect their own leaders.

According to new research by Henry Farber and Ilyana Kuziemko, professors of economics at Princeton, as well as Daniel Herbst, an economics graduate student, unions have played a major role in reducing economic inequality. As a summary of their research released by Princeton explains:

Among the study’s findings were that unions consistently have provided workers with a 10- to 20-percent wage boost over their non-union counterparts over the past eight decades. The researchers also discovered that when unions have expanded, whether at the national or state level, they tended to draw in more unskilled workers and raise their relative wages, with significant impacts on inequality.

“What we’re simply trying to do in this study is to be able to say something systematic, historically, whether there seems to have been an inverse relationship between unionization and inequality, so that when unions were strong, inequality tended to be lower,” Farber said.

“A strong lesson is that when unions were strong and they were growing, they were organizing the less-skilled workers and raising their wages, and that tends to reduce inequality,” he added.

Colin Gordon, a professor at the University of Iowa, argues that regardless of race, levels of inequality have closely followed the rise and fall of unions in the past century. In a June 5, 2012 blog post for the Economic Policy Institute, Gordon wrote:

Early in the [20th] century, the share of the American workforce which belonged to a union was meager, barely 10 percent. At the same time, inequality was stark—the share of national income going to the richest 10 percent of Americans stood at nearly 40 percent. This gap widened in the 1920s. But in 1935, the New Deal granted workers basic collective bargaining rights; over the next decade, union membership grew dramatically, followed by an equally dramatic decline in income inequality. This yielded an era of broadly shared prosperity, running from the 1940s into the 1970s.

After that, however, unions came under attack—in the workplace, in the courts, and in public policy. As a result, union membership has fallen and income inequality has worsened—reaching levels not seen since the 1920s.

Since the 1930s and continuing today, black workers have been especially well represented in unions. In the early 1970s, a high point for unions, nearly 40 percent of black men in the private sector belonged to a union, and they saw huge wage gains. Today only 14 percent of black men are unionized (compared to 11 percent for white men). There is strong evidence that the fall of unions has contributed to racial inequality in recent decades.

This summer the Supreme Court issued a major ruling in the case of Janus v. AFSCME. As an article published on July 19, 2018, by The Economist explains, this decision is likely to further undermine union power:

Even before the Supreme Court piled in, American unions were in a bad way. In their heyday in the mid-1950s, more than 30% of workers were members. Today just 11% are. With only a toehold in the private sector—where they cover a mere 7% of workers—unions have become increasingly reliant on faithful public-sector employees, 34% of whom are members, to stay financially afloat and politically relevant. The Supreme Court’s ruling in the case of Janus v AFSCME at the end of June will shrink the rump of union members even further….

In its Janus decision, conservative jurists on the Supreme Court cited the First Amendment, to hold that … [all] public-sector workers covered by a union will now have to opt in and consent before paying anything. It is not a question of whether unions will lose members as a result of this, but how many.

As a hostile legal and political environment makes it more difficult for workers to organize and win better conditions, the situation of American labor unions is dire. Yet, in spite of these difficulties, working people continue to stand up, and new waves of organizing may yet pave the way for greater economic equality in the United States.

Despite the negative impact of the recent Supreme Court decision, unions are continuing to organize and working people are continuing to speak out against runaway inequality. In 2018, the United States witnessed a surge of renewed labor militancy, with a wave of teachers’ strikes breaking out in more than a half-dozen states. Moreover, the emergence of new and promising forms of worker organization represent exciting developments for the labor movement.

The walkouts and rallies in Republican-dominated states, mainly organized by ordinary teachers on Facebook, have caught lawmakers and sometimes the teachers’ own labor unions flat-footed. And they are occurring in states and districts with important midterm races in November, suggesting that thousands of teachers, with their pent-up rage over years of pay freezes and budget cuts, are set to become a powerful political force this fall….

The growing fervor suggests that labor activism has taken on a new, grassroots form.

“Our unions have been weakened so much that a lot of teachers don’t have faith” in them, said Noah Karvelis, an elementary school music teacher in Tolleson, Ariz., outside Phoenix, and leader of the movement calling itself #RedforEd, after the red T-shirts protesting teachers are wearing across the country.

….Unlike in strongholds for labor, like New York or California, teachers’ unions in West Virginia, Oklahoma, Kentucky, and Arizona are barred by law from compelling workers to pay dues. Yet that has not stopped protesters from making tough demands of lawmakers.

Lily Eskelsen García, president of the National Education Association, the nation’s largest teachers’ union, called the movement an “education spring.” “This is the civics lesson of our time,” she said. “The politicians on both sides of the aisle are rubbing the sleep out of their eyes.”

While traditional unions have been inspired by this wave of action, new types of labor organizations are also forming. The last decade and a half has witnessed the rise of “alt-labor” groups that include workers centers and other advocacy organizations that are trying to push for labor rights. Rutgers University Professor Janice Fine described the growing alt-labor movement in an April 25, 2018 interview with Pacific Standard:

[Alt-labor groups include] worker centers—which are community-based worker organizations that are led by workers that do a combination of service, advocacy, and organizing. Or we're talking about unions that don't have traditional collective bargaining structures but work in a slightly different way. So, for example, Fight for $15 [a campaign to win a $15 minimum wage] isn't a union but was and is heavily financially supported and backed, in fact, by the Service Employees International Union…. Another kind of alt-labor organization would be OUR Walmart [an advocacy group for WalMart workers]. Or the National Domestic Workers Alliance, or the National Guestworkers Alliance, or the National Day Labor Organizing Network. Those are the national federations that have local chapters….

In terms of tactics, there are all kinds of things that workers can do—say, picketing a restaurant where workers haven't been paid the wages that they're due. And then a lot of these organizations have really focused on changing local policy and passing policies at the state and local level that raise standards in sections of the labor market that have been really hard to get to through direct pressure on employers. The Retail Action Project in New York led the way on new policies around fair scheduling, or the Chinese Progressive Association of San Francisco led the way on raising the minimum wage, or the Restaurant Opportunity Center is fighting to get rid of the tipped minimum wage, or the National Domestic Workers Alliance and its affiliates pioneered the Domestic Workers Bill of Rights, which has now passed in eight states.

Today, the future of unions in the United States is far from clear, but as long as there are unfair wages and unjust working conditions, people will continue to come together to organize for their rights. Even if the unions of the future look different from the unions that were instrumental in building the American middle class and creating greater economic equality in the mid-20th century, collective action and organization in some form will continue.

Los Angeles teachers and their allies won a strike demanding improved public education in LA. Students explore the background, strategy, demands, and impact of the strike with a quiz, reading, and discussion.