Young people are listening to the controversy over Supreme Court nominee Brett Kavanaugh, and they are talking about it. How can educators safely and productively bring these conversations into their school and classrooms? 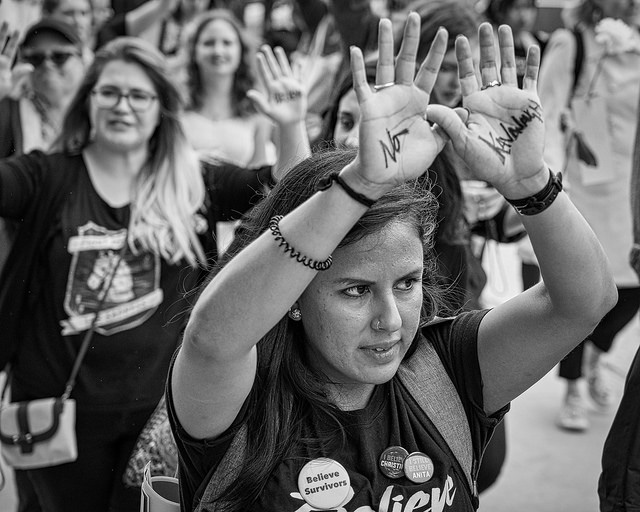 The charges made against Supreme Court nominee Brett Kavanaugh by Dr. Christine Blasey Ford and others have embroiled our country in a public conversation on issues including power, privilege, bias, sexism, misogyny, and consent.  Discussions are taking place around kitchen tables, in workplaces, and on social media.

Educators should reflect on how to bring these conversations into schools and classrooms as a teachable moment. Because the controversy centers on an incident that took place when Ford and Kavanaugh were teenagers, it has special salience for young people. They are listening and they are talking.

Even if you intend the discussion to focus on the facts and controversies surrounding the Kavanaugh appointment, not on students’ personal experiences, be prepared. This is a very delicate topic and one that needs to be undertaken with care, sensitivity, and support. We know that nearly half of tweens and teens experience some form of sexual harassment as part of their everyday lives in school. Further, one in five girls and one in twenty boys are victims of child sexual abuse. This abuse has devastating consequences, including post-traumatic stress disorder, family issues, anxiety, depression, body image issues, shame, guilt and suicidal thoughts. Yet most people, like Dr. Ford, do not report this abuse when they are children.

If in the course of discussion, students disclose personal information that you are required to report, follow the appropriate school, local, and/or state procedures for any given incident. If you don’t know what that is, ask your school’s administration or school counselor. It is important for adults to provide young people with appropriate counseling and crisis resources. See the National Association of School Psychologists website for additional resources.

It may be helpful to work with your school’s social worker or guidance counselor to help students understand the continuum of sexual misconduct and abuse, which includes sexual harassment, sexual abuse, sexual assault, intimidation and rape. The Kavanaugh controversy also raises the issue of consent, which is now beginning to be discussed at the K-12 level.

If you decide to discuss the Kavanaugh controversy as a “teachable moment” in the news, you can start by determining what students already know, what they want to know, and what questions they have.

Major public incidents like these typically fill our news and social feeds with information—some accurate and some inaccurate—as well as opinions from all kinds of people, both ordinary and famous. You can help clarify the facts so far. The brief backgrounder below may help.

Once you’ve opened up discussion, work with students to come up with an accurate understanding of what has happened so far, as far as we know. It’s also important to provide time and space for students to reflect on what they believe, what they value, and what they think should be done.

In early July 2018, just before Trump named Judge Brett Kavanaugh as his nominee to fill a vacancy on the Supreme Court, Dr. Christine Blasey Ford says she contacted her Congressperson, Rep. Anna Eshoo, and told her that Kavanaugh had sexually assaulted and attempted to rape her when the two of them were in high school.

Ford later shared this information with Senator Dianne Feinstein, the ranking Democrat on the Senate Judiciary Committee. That committee is charged with considering Supreme Court nominees before they are sent to the full Senate for approval. Kavanaugh took part in Judiciary Committee confirmation hearings in early September.

On September 16, the Washington Post published an interview with Ford about her charges against Kavanaugh. Although Ford had been very anxious about going public with her story, she allowed her name to be released publicly for the first time. Kavanaugh denied that the incident ever took place. Kavanaugh also categorically denied later charges of sexual misconduct by two other women, Deborah Ramirez and Julie Swetnick.

On September 27, Ford and Kavanaugh each testified before the Senate Judiciary Committee and presented their very different stories. While Ford stated with absolute certainly that Kavanaugh had  assaulted and attempted to rape her, Kavanaugh stated with absolute certainty that he did not. Throughout the testimony, protesters stood outside the committee chambers and amassed nearby, many with “Believe Women” or “Believe Survivors” written on their palms.

When the hearing concluded, Republican Senator Jeff Flake said he could not support Kavanaugh unless the FBI conducted an investigation of the charges against the nominee. Flake’s call echoed a demand already made by Democrats. Ford said she welcomed an investigation, Kavanaugh said he would cooperate, and a one-week investigation got underway.

Some Issues to Discuss

Depending on student interest, delve into a particular area of the controversy. Consider one or more of the following.

Donald Trump tweeted, “I have no doubt that, if the attack on Dr. Ford was as bad as she says, charges would have been immediately filed with local Law Enforcement Authorities by either her or her loving parents.”  Through this tweet, Trump voices a common, but false, assumption: that if someone doesn’t report an assault, it didn’t happen. It also implies that we shouldn’t believe these allegations unless they are reported. In fact, most childhood incidents of sexual assault are not reported.

When Anita Hill testified before the Senate Judiciary Committee about sexual harassment by then Supreme Court nominee Clarence Thomas 27 years ago, all 14 members of the committee were white men. Today, all 11 Republican members of the Senate Judiciary Committee are still white men. Of the Democrats on the committee, there are four women, including two women of color, and six men, five of whom are white. Many people have publicly questioned how this critical committee dominated by men can fairly assess sexual misconduct.

Through the #MeToo movement, discussions have surfaced about “male culture,” or the idea that “boys will be boys.” The implication is that harmful and sexist attitudes and acts of sexual misconduct/assault are simply part of being young and male, and that we need not take this behavior very seriously, since boys eventually grow out of it.  However, women who are victimized by this behavior have to live with the very real consequences their entire lives. The idea that “boys will be boys” is disrespectful to both men and women. It perpetuates oppressive gender roles, sexism, and misogyny.

Another issue that has been raised by this controversy is the double standard in our culture in how we evaluate and judge childhood acts. While some people support Kavanaugh (a white man who grew up in an affluent family) by arguing that he didn’t commit the acts he is charged with, others say that even if he did, he shouldn’t be judged by his worst childhood act. Research indicates that such lenient attitudes do not extend to black and Latino boys. As early as preschool, children of color are punished for “childhood acts” at far higher rates than white children, and their punishment is much harsher. This biased response perpetuates and feeds the school-to-prison pipeline, setting in motion a system that often lands students of color in the criminal justice system. Some argue that Kavanaugh, a powerful white man, is being excused for his actions because of his race and class privilege.

When we have conversations with young people about violence and injustice in the world, it is vital that we don’t leave them feeling disengaged, hopeless, and powerless. As an antidote to that, talk with young people about what they can do.  Have them learn more and join the conversation in digital spaces using hashtags like #WhyIDidntReport, #Believe Survivors, #MeToo, and #Survivors.

Other ideas include: organizing a schoolwide forum on these issues, inviting a guest speaker, getting involved in organizations doing something about these issues, amplifying their own voice through social media, and talking with the school administration ways to reduce sexual harassment in school.

Whether Kavanaugh becomes a Supreme Court Justice or not, the public dialogue over this controversy  should mean something and make a difference.  We can begin by engaging young people in discussions that amplify their voices and support them in acting to create a society that is safe and respectful for all of us.

Students listen to and reflect on a range of voices about the leaked Supreme Court draft ruling that would reverse Roe v. Wade.

Judge Jackson may become the first Black woman on the Supreme Court. Students explore the confirmation process, Jackson's background, and diversity on the court.

Students read one high school senior’s perspective on what teenagers are learning from the Kavanaugh hearings, and share their own perspectives.