HAITI: Still in Crisis, but no Longer in the News

(4 minutes)
Ask students to think back to what happened in Haiti in January 2010. In pairs ask students to discuss for about a minute each some of the "basic needs" that Haitians are doing without because of the earthquake. Explain that a "basic need" is something we as humans need to survive. After a few minutes ask volunteers to share and chart the answers. Students may come up with such things as food, water, shelter, safety, etc.

(1 minute)
Explain that in today's lesson students will explore the needs of the people of Haiti and how the media affects how we think about, feel and react to world events.

(8 minutes)
Go over Maslow's pyramid (below) with your students. Provide them with some background information about Maslow: Abraham Harold Maslow was an American psychologist who developed the "Hierarchy of (Human) Needs" model, also known as "Maslow's Needs Pyramid" in the 1950s. According to Maslow, the needs at the foundation of the pyramid need to be satisfied before higher needs can be achieved. People are motivated to fulfill their basic needs as they continue to move towards personal growth and fulfillment. 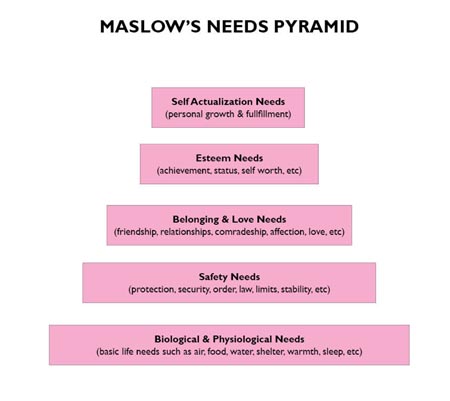 Ask your students to look at "Maslow's Needs Pyramid" and take a few minutes to discuss what they notice about how the pyramid is built up. Where do they think they themselves or the people they know fit into the pyramid? What about the people of Haiti? Where did they fit in right after the earthquake? What about today?

Media Coverage of the Earthquake & Its Aftermath

(10 minutes)
As you explore the media coverage of the earthquake that struck Haiti in January 2010, ask students to think about and discuss:
Most of the media outlets have left Haiti and only very few journalists are still reporting on what's happening. The world has moved on!

(15 minutes)
Consider the blogpost below by Sasha Kramer. Kramer lives in Haiti and is a co-founder of Sustainable Organic Integrated Livelihoods (SOIL) a non-profit organization dedicated to protecting soil resources, empowering communities and transforming wastes into resources in Haiti.
Read the blogpost to the class, pausing perhaps to ask students to respond to what Sasha writes by asking some or all of the following questions:
While reading the blogpost, consider showing the slideshow that shows the SOIL staff journey from Cap Haitian in the north of the country down to Port au Prince last month and the photos that the staff has taken since then as they've been in Port au Prince helping out with the relief efforts.

Blogpost by Sasha Kramer
Friday February 12, one month after the earthquake, the first day of Jounen Jèn, the days of mourning and remembrance, and we walked through the twisted iron and dusty shards of glass of the shattered National Cathedral. As we crossed through the open door and stared down the length of the cathedral it was as though the world had ended and even the wind had disappeared into the silence of the rubble. Just blocks away, in front of the crumbling palace, thousands of people dressed in white were singing songs of grief and praise, but inside the National Cathedral, on this national day of remembrance there was only the sky and the crumpled flowers from the alter scattered across the floor where so many feet once tread.
As we stepped gingerly through the cement dust, climbing towards where the alter once stood, I remembered the last time that I walked down this aisle, through the sunbeams and the wailing, walking to pay my last respects to Father Gerard Jean Juste in October 2009. This place has always broken my heart. So many voices that once sang in this church have been swallowed by the earthquake and I longed to hear Father Gerry's voice, but I knew what he would have told me. He would tell me that those of us who survived have to sing louder, to work harder and to love each other more. As we left the cathedral and passed the crowd on Champ de Mars I could hear the crowd of thousands singing their sadness into salvation. I knew that Father Gerry was with them, under the tarp churches, marching through the streets, watering the parks of the city with their tears.
When we got home in the evening on Friday everyone at Matthew 25, where we are staying, gathered to read aloud a prayer for Haiti. Three quarters of the way through the prayer the tears began rolling down my cheeks. I could see the cathedral as they carried Father Gerry's body down the aisle and the flowers buried in dust that we had walked through earlier. I cried for hours that night for the first time since coming to Port au Prince. Mine were only drops in the lake of tears that flowed through Haiti this weekend as people said goodbye to their loved ones and their lost city.
I end with an excerpt from the prayer that we read on the 12th.
"Raise up your people from the ash heap of destruction and give them strong hearts and hands, shore up their minds and spirits. Help them to bear this new burden"
This week with your donations we were able to provide a week's worth of food to over 350 families, deliver 24,000 gallons of water to 5 communities, provide medicines to several mobile clinics, give over 4000 water sachets in churches during Jounen jèn and purchase 140 tarps, reaching over 5,000 people in Port au Prince. In Cap Haitien the SOL team provided food and medicines to victims of the earthquake that have been relocated out of the capital. SOIL is still small and though we cannot rebuild the National Cathedral, with your support we can help thousands of families in Port au Prince to bear this new burden.
It is the strength of the Haitian people that has helped me to rise from the ashes of my own fear and sadness, today on this final day of mourning I pray that I can treat the victims of this tragedy as they have treated me, with compassion, respect and dignity. I am so grateful to all of you who have helped to lighten Haiti's load, this experience has helped us all to remember our humanity.
With love from Port au Prince,
Sasha

(10 minutes)
In microlabs (small groups of perhaps four students) ask students to discuss: "What makes a news story?"
If the cameras and journalists are not there to report on what's happening, is it news? Is it the events that make the news, or the journalists covering the events that make the news? Who decides what to cover? Who decides what is news?

(2 minutes)
Ask a few volunteers to share what they learned from today's lesson.

Many journalistic codes of ethics share common principles of truthfulness, accuracy, objectivity, impartiality, fairness and public accountability when it comes to gathering and disseminating information.
Consider all of these principles as you think about how someone like Sasha reports on what's happening in Haiti. Compare that with how an outside journalist who was in Haiti for a few weeks only, might report on the crisis and its aftermath.
Marieke van Woerkom is an educator and trainer who works with Morningside Center. She has helped young people and adults around the world learn skills to resolve conflict and foster cross-cultural understanding.
We welcome your thoughts and suggestions about this activity. Please email us at: info@morningsidecenter.org.

Students will: consider different natural disasters look at events in Japan since the massive earthquake on March 11, 2011 read and discuss quotes from Japanese people and others about the disaster make cranes and create messages for the people of Japan

Students discuss their own experiences of helping others, then view and discuss a brief video about Japanese children who are working together to help their community in the wake of the earthquake and tsunami.

Help your students learn about the earthquake and Haiti's history, and brainstorm about how they can help Haitians now and in the long run.