A Dialogue on Youth Leadership

Students explore the connections between young people in Florida campaigning for gun reform and youth leaders in Black Lives Matter – and consider why the media has focused so much less attention on the latter.

Display the photos below (or see this set of pdf handouts).

Invite students to look closely at the photos then discuss: 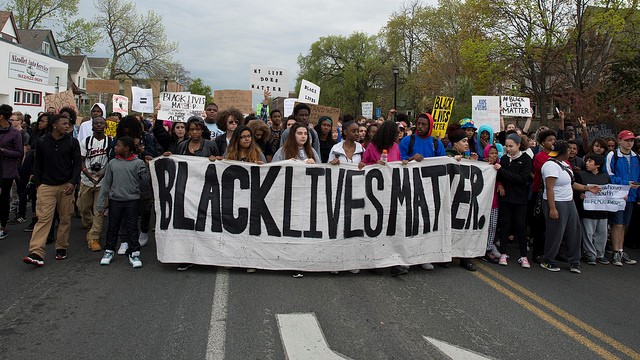 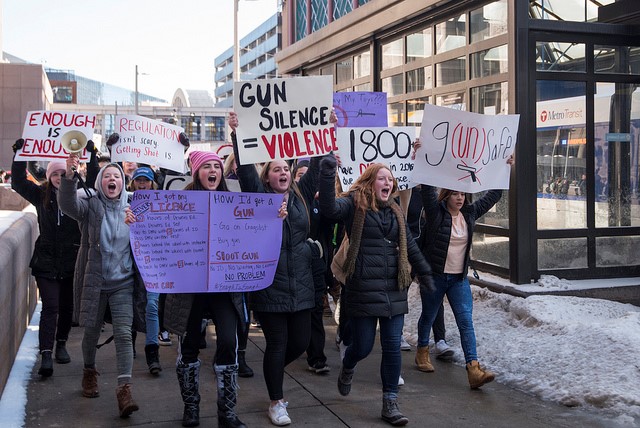 Invite students to read the tweets below, which are also included in this handout (Handout 1).

Explain that the handout includes a set of tweets by Emma Gonzalez, a student from Marjory Stoneman Douglas High School in Parkland, Fla. Gonzalez and her classmates have become activists in the fight to stop gun violence following a shooting at their school that killed 17 people.

After they've read the tweets, ask students to discuss:

Next, ask students to read Media Responses to Student Activism below, and also in the pdf handout (Handout 2).  Explain that this handout includes quotes from a variety of media sources about activism by the Parkland students and by young people who have been part of the Black Lives Matter movement.

After they’ve read the handout, ask students to turn to a partner, or meet in triads, to discuss  their thoughts and feelings about what they read.

Bring students back to the full group to share out what they discussed according to the following questions:

“The shooting massacre of 17 people … at Marjory Stoneman Douglas High School in Parkland, Fla., not only reignited the debate over gun control but also launched a group of teenage activists.  Students from the school have given dozens of interviews, gained hundreds of thousands of followers on Twitter and visited the White House and the Florida state Capitol. They’ve challenged senators and congressional representatives on live television and gone viral in videos of their pleas to prevent another slaughter.”  http://www.latimes.com/nation/la-na-parkland-student-activists-20180223-htmlstory.html

“Experts say the [Parkland] teens … are uniquely positioned to become the leading voices in the gun debate. This generation has grown up as native users of social media and have never known a time when there weren't mass shootings at schools. "This has happened in their community in their school. They’re given this window of opportunity to speak out for a generation that is tired of being unable to speak out against gun violence," …. The students are of the right age and era to articulate exactly how gun violence has affected them.” https://www.nbcnews.com/news/us-news/how-parkland-survivors-became-advocates-gun-reform-n849596

“The students are smart, articulate, and direct in what they want: gun reform, or at least a country where schools are safer—and they're mobilizing … [using] social media. There have been efforts on Snapchat that track protests and walkouts. There have been teenagers connecting with each other through Twitter hashtags to present a unified front.” https://psmag.com/education/after-the-parkland-shooting-listen-to-the-teens

For some black activists who have long been mobilizing around gun violence, the current wave of public attention and outrage over the issue is welcome. But it also invites the question of why there’s been comparatively little attention and outrage focused on the even more common reality of routine gun homicides in the country, which disproportionately affect communities of color, and specifically black Americans. https://www.huffingtonpost.com/entry/black-lives-gun-violence-florida-shooting_us_5a8f1a11e4b00804dfe6a466

When “the young people of Black Lives Matter …. were protesting in … cities across America, much of the country didn’t bother to listen to their message. They were not embraced by the mainstream for their bravery, their determination or resolve to bring attention to reckless police killings that disproportionately impact young African-Americans. Some labeled them troublemakers, even terrorists. http://www.chicagotribune.com/news/columnists/glanton/ct-met-florida-teens-black-lives-matter-dahleen-glanton-20180223-story.html

“I’m very impressed and inspired by what I’m seeing these students do. Fighting for gun control ― I take my hat off to them,” Cobe Williams, deputy director at Chicago-based gun violence prevention organization Cure Violence told HuffPost on Wednesday.  “I like what they’re doing, and we’re doing this on an everyday basis,” he said. “I applaud them, but we see this violence on an everyday basis. It could be one person or 24 people ― one person shot and killed is too many.” https://www.huffingtonpost.com/entry/black-lives-gun-violence-florida-shooting_us_5a8f1a11e4b00804dfe6a466

Prominent black organizers and public figures have ... noted the largely positive public response to the student activists from Parkland ― most of whom are not black and who attended school in a largely white, relatively affluent Florida suburb ― compared to the frequent vilification of young black activists protesting gun violence, particularly police shootings.  “It’s complicated, but I would encourage us to lean into [and explore] the complicated,” Black Lives Matter co-founder Patrisse Cullors said.  https://www.huffingtonpost.com/entry/black-lives-gun-violence-florida-shooting_us_5a8f1a11e4b00804dfe6a466

After another deadly shooting, how can we help young people and adults process the news and find comfort?

Students learn about and discuss strikes by teachers in West Virginia, Oklahoma, and Kentucky, and consider how they are connected to student-led protests over gun violence.

Edna Chavez, a 17-year-old senior from South Los Angeles, made an impassioned speech about gun violence at the student led March for Our Lives in March 2018. In this lesson, students learn some background about South L.A. and consider Chavez's speech, which puts gun violence in a larger societal context.