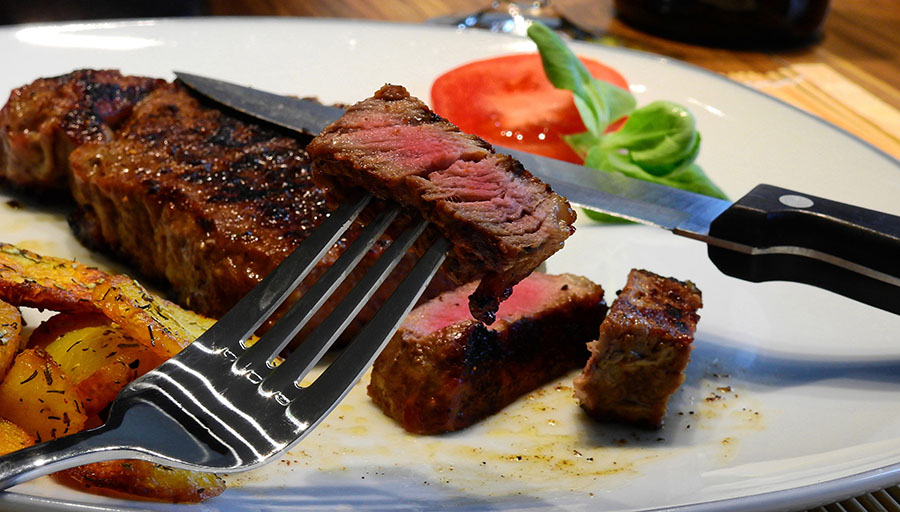 Advocates of vegetarianism have long argued that a meat-free diet is not only healthier, but also an important way to reduce our own environmental impact. In the age of climate change, this argument is taking on new significance.

This lesson has students explore vegetarianism as a response to the climate crisis. It includes two readings. The first looks at how global production of meat-based foods—especially in the U.S. and other high-income nations— contributes to climate change. The second reading discusses collective efforts by governments and activists to address the issue by changing food systems to reduce meat production and implementing stricter environmental regulations on factory farms. Questions for discussion follow each reading.

Invite students to share their responses to this question:

Consider using an “opinion continuum” format: Post a sign saying “Yes” on one end of the classroom, and “No” on the other. Invite students to stand next to the sign that reflects their own response – or somewhere on a line between the signs if, for instance, they limit their meat consumption in some form.

Once students have responded (either verbally or by positioning themselves along the opinion continuum), ask for volunteers who do not eat meat or who are somewhere in the middle on this question to share why they have made this choice. You might ask:

Ask students who do eat meat:

Share with students that today we’ll be reading about and discussing why some people are choosing to cut back or eliminate their meat consumption as a way of reducing their personal impact on the climate.

Meat Consumption: A Major Cause of Climate Change

Advocates of vegetarianism have long argued that a meat-free diet is not only a healthier way to eat, but also an important way to reduce our own environmental impact.

In the age of climate change, this argument is taking on new significance. Factory farming of animals for human consumption accounts for 37% of global emissions of methane, a greenhouse gas far more potent than carbon dioxide. It is also responsible for a sizeable percentage of all greenhouse gas emissions globally, with beef production accounting for the largest portion.

The top three global meat and dairy producers, including Tyson Foods in the United States, collectively have a carbon footprint greater than fossil fuel giant BP. Furthermore, the global growth of factory farming is expected to triple by 2050.

Writing for The Guardian in September 2021, journalist Oliver Millman reported on research findings that showed how meat production is an even greater contributor to global emissions than previously thought. Millman wrote:

The global production of food is responsible for a third of all planet-heating gases emitted by human activity, with the use of animals for meat causing twice the pollution of producing plant-based foods, a major new study has found.

The entire system of food production, such as the use of farming machinery, spraying of fertilizer and transportation of products, causes 17.3 billion metric tons of greenhouse gases a year, according to the research. This enormous release of gases that fuel the climate crisis is more than double the entire emissions of the U.S. and represents 35% of all global emissions, researchers said….

The raising and culling of animals for food is far worse for the climate than growing and processing fruits and vegetables for people to eat, the research found, confirming previous findings on the outsized impact that meat production, particularly beef, has on the environment….

Grazing animals require a lot of land, which is often cleared through the felling of forests, as well as vast tracts of additional land to grow their feed. The paper calculates that the majority of all the world’s cropland is used to feed livestock, rather than people. Livestock also produce large quantities of methane, a powerful greenhouse gas.

“All of these things combined means that the emissions are very high,” said Xiaoming Xu, [a] University of Illinois researcher and the lead author of the paper. “To produce more meat you need to feed the animals more, which then generates more emissions. You need more biomass to feed animals in order to get the same amount of calories. It isn’t very efficient.”

….Scientists have consistently stressed that if dangerous global heating is to be avoided, a major rethink of eating habits and farming practices is required. Meat production has now expanded to the point that there are now approximately three chickens for every human on the planet.

Given such research findings, it is not surprising that many scientists and public policy advocates believe that reducing meat consumption—especially in America and other high-income nations—can play a significant role in the fight against global warming. Writing for the online magazine Carbon Brief, author Ayesha Tandon discusses a 2022 study modeling the impacts of reduced meat consumption in high-income nations. Tandon writes:

Animal-based foods have higher carbon and land footprints than their plant-based alternatives, and are most commonly consumed in high-income countries….

High-income countries could cut their agricultural emissions by almost two-thirds through dietary change, the authors find. They add that moving away from animal-based foods could free up an area of land larger than the entire European Union.

If this land were all allowed to revert to its natural state, it would capture almost 100 billion tons of carbon – equal to 14 years of global agricultural emissions – the authors note. They add that this level of carbon capture “could potentially fulfill high-income countries’ CO2 removal obligations needed to limit warming to 1.5C under equality sharing principles.”

“To put this in perspective,” [said Dr Sonja Vermeulen, the lead global food scientist at WWF,] “it’s about the same positive impact as all countries signing up to and implementing the COP26 declaration on the transition to 100% zero emission cars and vans globally by 2040.”

With research clearly demonstrating that the use of animal products for food is a major contributor to greenhouse gas emissions, the question of whether to eat vegetarian has become an urgent topic of discussion in a world already feeling catastrophic impacts from climate change.

Discuss the questions below as a whole group or in small groups that will briefly report back to the rest of the class.

Addressing the Environmental Impact of Meat

In terms of taking steps to reduce the environmental impact of our diets, shifting to fully plant-based eating is just one possibility.

While some advocates believe that we should go vegetarian (meaning that people would stop eating meat) or vegan (which additionally involves giving up dairy and other animal products), others argue that even taking smaller steps to reduce meat consumption can have a big impact. This is the reasoning behind Meatless Mondays, an advocacy campaign started in 2003 that encourages individuals and groups to go meatless one day per week.

The campaign has since been adopted by schools, hospitals, and other institutions in more than 40 countries around the world. Recently, New York City has implemented Meatless Mondays in all of its public schools and hospitals.

Reducing meat consumption to help the environment is not just a personal issue. We can also take collective action. Recognizing the large role that industrial production of meat-based foods plays in contributing to climate change, policymakers and activists have been promoting changes to our food systems designed to protect the climate. In an August 30, 2022, article for the website The Beet, journalist Maxwell Rabb reported on recent climate initiatives in the U.S. and abroad that aim to reduce meat production. Rabb wrote:

The climate plan outlines that San Diego plans to reduce its meat- and dairy-related emissions by 20 percent. The plan also notes that it hopes to cut its water footprint by the same percentage. The city plans to promote a plant-based agriculture and food system to replace the existing animal agriculture industries….

Last July, the Berkeley City Council announced that it would replace approximately 50 percent of its animal-based food expenditures with plant-based options by 2024. The transitional efforts aim to cut waste and greenhouse gas emissions attributed to the city government. The campaign marked the first step in the city’s plan to cut animal-based products from all city-run establishments including municipal buildings, senior centers,  the jail, and more, according to The Daily Californian.

….Outside of the United States, several countries have launched plant-based inspired initiatives to combat climate change, including Denmark. This April, the country invested $100 million into a fund exclusively devoted to promoting plant-based education, sales, and innovation in the country. The program aims to undercut the negative environmental consequences of Denmark's large meat industry.

One campaign, The Plant-Based Treaty, aims to expand upon the existing climate goals set by the Paris Agreement, emphasizing that the country and its citizens must adopt plant-based practices to successfully counter the worsening climate crisis. Organized by three tenets (Relinquish, Redirect, and Restore), the initiative emphasizes the urgency needed to protect the planet.

In addition to initiatives like these, which focus on reducing public consumption of meat, environmental groups have also been seeking to increase regulation of industrial producers of meat-based foods.

Writing for Bloomberg in March 2022, journalist Deena Shanker reported that environmental groups are lobbying Congress to regulate meat producers and enable the Environmental Protection Agency to control carbon emissions from livestock production. According to Shanker:

“In addition to fueling the climate crisis, factory farms release dangerous toxins into the air we breathe and the water we drink,” environmental groups wrote in a letter to lawmakers in February. The EPA has authority under the Clean Air Act to regulate these emissions, but the appropriations riders have been included for years, keeping the agency from doing so, the groups argue.

“Please do all within your power to ensure EPA has the resources to hold this industry accountable for its emissions,” urged the groups, which include Campaign for Family Farms and the Environment, Food & Water Watch, Friends of the Earth, Indigenous Environmental Network, Institute for Agriculture and Trade Policy and the National Family Farm Coalition.

.…“The bottom line is that environmental regulation of agriculture has always been extremely limited in the United States,” said Tim Searchinger, a senior research scholar at the Princeton School of Public and International Affairs and the technical director of the food program at World Resources Institute. “As a general rule, it’s just because of the political clout of the agricultural industry.”

The science clearly demonstrates the environmental impact of industrial meat production. However, due to the political power held by the agriculture industry, it remains to be seen whether environmentalists will succeed in establishing stricter regulations in the future.

Discuss the questions below as a whole group or in small groups that will briefly report back to the rest of the class.

Ask students to share one thing that stood out for them in the discussion today.

An unusual hurricane season opens up an exploration of the climate crisis and steps toward climate justice.

Air travel is becoming one of the worst contributors to climate change. In this activity, students read about and discuss the impact of air travel on the climate crisis and what we should do about it - personally and as a society.