I've been complimented on my English about as often as I've been asked why I don't speak Spanish.  In high school and college I was frequently labeled "exotic."  My curly hair is mystifying to people everywhere, it seems, as I am constantly asked a stream of questions about it.  Is it really just like that?  How do I control it?  Why don't I straighten it?

I always thought the questions were bizarre, but I didn't realize growing up that this was something anyone else ever experienced. In general, I assumed that people asked me these things out of genuine curiosity.  Most often the people asking were strangers, or they had just met me.

Over the years I have come up with dozens of responses (with varying levels of detail and snark). Even though I assumed the best of the people around me, it was exhausting.

At the time,  I didn't know what "micro-aggressions" were.  I wish I had.  I wish it was something that we had discussed in school.  Maybe then I might have been able to explain why I found it so frustrating every time someone asked, sometimes in my Spanish classes, "but why don't you speak Spanish?" 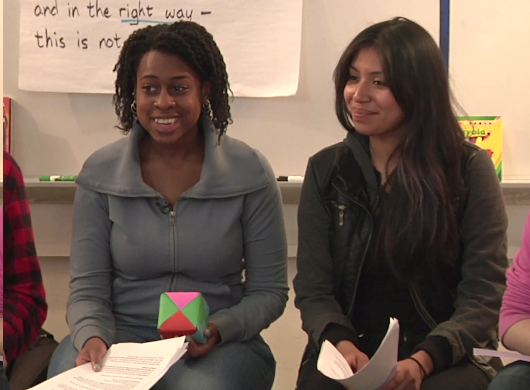 Amanda: Lupe and another classmate of ours, Kendall, they did a circle on micro-aggressions And when we did that circle it was like—I never knew there was an actual name for that...that if I say to Lupe: you have to speak Spanish because you're Spanish, that I'm actually like doing something. That there's an actual term for that

Lupe:  So micro-aggressions are the little things you say...the things I've been told, "you're Hispanic—you're Mexican, you have a big family."  Or "you're Mexican, you know the Mexican parties."  Just because of the culture or gender or your sexuality...or any category you fit in, they assume these things.  And I remember when we first learned about it, and we decided to make a circle about it.  When we did the circle, we went around, I was amazed at how many people have been through that.

Students learn about and discuss the remarkable success of an organization of farmworkers that is fighting abuse and demanding dignity on the job. The activity includes two short videos, discussion, and a reading.
In the Circle
Restore360
Restorative Practices

When I was in Ohio a few weeks back, I visited four different middle schools that recently started implementing circles. I had been asked to do some modeling, so that teachers and counselors who were expected to run circles with their students could get a sense of what a well facilitated circle process looks like. I wasn't making any promises about what these circles would achieve, because I didn't have a relationship with any of the students and there's only so much that's possible in a first-time circle.

In the Circle
Restorative Practices
Restore360
A few weeks ago in Ohio, several of the teachers I was coaching raised a concern I've heard before. It's about handling student emotions in a circle. "Was it safe to raise emotional issues in a circle?" these teachers asked "After all, they weren't therapists."
In the Circle
Restorative Practices
Restore360