Practice DBQ: The Decision to Drop the Atomic Bomb on Hiroshima & Nagasaki

Read/view the documents in Part A (Documents 1-7) and answer the question(s) after each. Some of these documents have been edited for the purpose of this exercise. As you think about each document, take into account both the source and any point of view that may be presented in it.

Then, in Part B, use information from the documents in Part A and your knowledge of history, geography, and current events to write a well-organized essay in which you:

Historical Context:
The U.S. decision to drop atomic bombs on the Japanese cities of Hiroshima and Nagasaki in August 1945 has generated much controversy over the years. Some argue that the bombing was necessary to end World War II, while others believe that more than 200,000 civilians died in vain.

The documents below relate to the bombing of Hiroshima and Nagasaki. Examine each document carefully and then answer the question or questions that follow.

"I had then set up a committee of top men and had asked them to study with great care the implications the new weapons might have for us. It was their recommendation that the bomb be used against the enemy as soon as it could be done. They recommended further that it should be used without specific warning... I had realized, of course, that an atomic bomb explosion would inflict damage and casualties beyond imagination. On the other hand, the scientific advisors of the committee reported... that no technical demonstration they might propose, such as over a deserted island, would be likely to bring the war to an end. It had to be used against an enemy target.
The final decision of where and when to use the atomic bomb was up to me. Let there be no mistake about it. I regarded the bomb as a military weapon and never doubted it should be used."

Why did President Truman feel that the atomic bomb had to be used against enemy targets?

Document 2
"The use of this barbarous weapon at Hiroshima and Nagasaki was of no material assistance in our war against Japan. The Japanese were already defeated and ready to surrender...

"In being the first to use it, we . . . adopted an ethical standard common to the barbarians of the Dark Ages. I was not taught to make war in that fashion, and wars cannot be won by destroying women and children."
— Admiral William E. Leahy, President Truman's Chief of Staff, in his memoirs "I Was There"

Why did Admiral Leahy feel the use of the atomic bomb on Japan was unnecessary?

Why did Admiral Leahy think the use of the atomic bomb on Hiroshima and Nagasaki was ethically wrong?

"The face of war is the face of death; death is an inevitable part of every order that a wartime leader gives. The decision to use the atomic bomb was a decision that brought death to over a hundred thousand Japanese...

"But this deliberate, premeditated destruction was our least abhorrent alternative. The destruction of Hiroshima and Nagasaki put an end to the Japanese war. It stopped the fire raids, and the strangling blockade; it ended the ghastly specter of a clash of great land armies. In this last great action of the Second World War we were given final proof that war is death."

Why did Stimson think the use of the atomic bomb on Hiroshima and Nagasaki was a terrible thing to do but better than any alternative?

"How can a human being with any claim to a sense of moral responsibility deliberately let loose an instrument of destruction which can at one stroke annihilate an appalling segment of mankind? This is not war: this is not even murder; this is pure nihilism. This is a crime against God and humanity which strikes at the very basis of moral existence. What meaning is there in any international law, in any rule of human conduct, in any concept of right and wrong, if the very foundations of morality are to be overthrown as the use of this instrument of total destruction threatens to do?"

What does the author mean by saying that dropping a nuclear bomb "strikes at the very basis of moral existence?"

"The day was August 6, 1945. I was a G.I. who had weathered the war in Europe and now awaited my place in the storming of Japan's home islands. On Truman's orders, the first atomic bomb ever wielded in war exploded over Hiroshima. For Americans in uniform and those who waited for them to come home, outrageous as this might appear from the moral heights of hindsight, it was a sunburst of deliverance."
—Lester Bernstein, New York Times, 10/24/65

Why did Bernstein feel "a sunburst of deliverance" when the atomic bomb was dropped on Hiroshima?

"The view where a moment before all had been so bright and sunny was now dark and hazy... What had happened? All over the right side of my body I was bleeding... My private nurse set about examining my wounds without speaking a word. No one spoke... Why was everyone so quiet? The heat finally became too intense to endure... Those who could fled; those who could not perished...

Hiroshima was no longer a city but a burned-over prairie. To the east and to the west everything was flattened. The distant mountains seemed nearer than I could ever remember... How small Hiroshima was with its houses gone."

What observations did the doctor make about the effects of the bombing on his city? 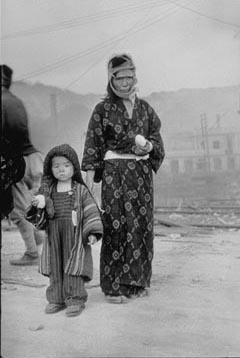 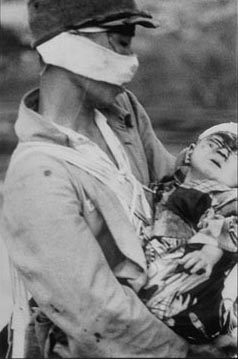 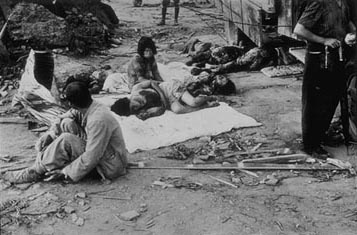 Describe the effects of the bombing, as seen in these photographs.

Student readings explore the morality and legality of President Obama's controversial "kill list" and consider arguments for and against drone warfare. Questions for student discussion follow each reading.

Two student readings provide a brief history of the Guantanamo Bay detention center, explore arguments for and against the facility, and examine the evolving debate about it during the Obama administration. Discussion questions follow