A Moment for Pause

Dionne Grayman, a retired football mom, reflects on Damar Hamlin, why our society has grown so desensitized to the breaking of Black boy bodies and spirits, and why we need a pause.

I am a (retired) football mom. Between my two sons, I have attended over 2,000 games, stood in weather that required Mt. Everest-like gear, and visited ERs with fractures, sprains, one dislocated shoulder, and two concussions. I’ve also tended to the bruised egos, broken hearts, and crushed spirits that attend competitive sport.

As I type this now, my OWN self is wondering what kind of loving parent subjects their child to what could seemingly amount to abuse and cruelty. But I did. So did my parenting partner. And his parents. And our friends. And their cousins and neighbors. And their relatives, co-workers, church, fraternity, and sorority members. 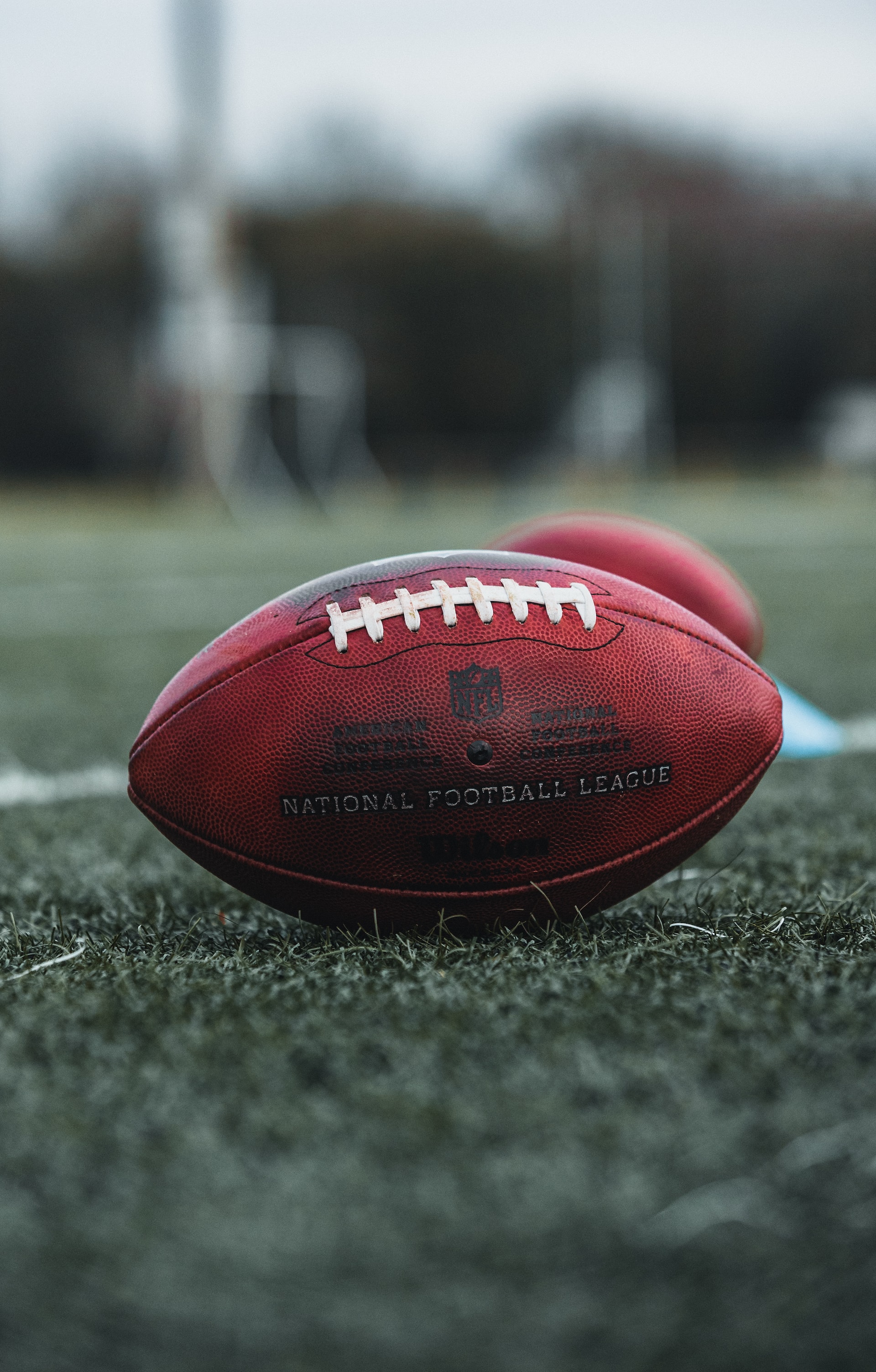 The energy around organized, competitive sport in this country is rivaled only by the energy around organized, competitive youth sport in this country. Ask any caregiver who shows up on a field somewhere on a Saturday or Sunday and they will tell you about the way it goes down. Not for the weak or faint of heart, on the Astroturf, or in the stands. THAT might be the single unifying truth uniting all of the divided citizenry of the United States: We live for the win. The tougher, the rougher, the messier, the better.

Even I, joy justice lover and Nap Ministry devotee (shouts to Bishop Hersey!), would be fist-bumping with my parenting partner whenever one of our boys tried to run somebody over. The higher the hit count, the better. The louder the thud, the best.

We would also, however, partake in the ritual of being silent whenever a player was down, sending prayers of hope and thanks that it wasn’t one of ours – unless it was actually one of ours. The praying is different in these moments. When players are young, coaches will tell them to pretend that they’re hurt to get an official timeout that gives the coach time to change a play. The prayer comes through as relieved laughter when the not-really-hurt player is ready to get up.

The applause prayer tends to start in the middle school years. A player who has suffered a sprain or has the wind knocked out of them doesn’t necessarily jump right up. The minutes seem interminable, talking is hushed and hope-filled, and when the player gets up, the sound of clapping hands peal like church bells.

The prayers for high school players call in all the deities, doctrine be damned. Each game is required by law to have licensed medical personnel along with EMT workers and a working defibrillator at every game.

During our son’s senior year, his team, the underdogs, put on a made-for-TV comeback that saw him playing at his highest level. Friend, allow me a bit of theatrical leeway here: With less than a minute on the clock, he intercepted the ball and put his team in the position to pull off the upset of the year. The quiet went around the stands like a fan wave, one section at a time. When I looked to see what everyone else was pointing out, I could see my son standing upright, but his left arm was twisted away and hanging from his body in such a way that his injury wasn’t registering for me. His left shoulder had been dislocated during a tackle and I could feel the pain on his face.

Our section was filled with local family members, out-of-town relatives, friends, neighbors, former coaches, and teammates because this was THIS game and he was THAT dude. His father went down to the field to check on him. By the time my breath came back, my son was back on the field.

Both of my sons are considered “small”: less than 5’10 and in the 155-160 pound range with much eating effort. My oldest son is Mr. See Me, because he is going to make sure you know he’s in the room. My youngest son is Mr. Watch Me, because you won’t want to miss a chance to be in the room with him. Football taught them discipline and the importance of teamwork. It taught them what it means and what it feels like to be reliable. It gave them a sense of identity. It instilled pride. They experienced what it took to achieve a goal. They discovered their own resoluteness and resilience.

When their team lost a game, they were encouraged to feel their emotions of hurt and sadness. When they made a mistake, they learned how to make a distinction between carrying responsibility and holding shame. Soul hurts – like my oldest son being told that he wouldn’t be seeing much playing time in his senior year, or my youngest son seeing his almost-within-reach dream of playing in college (and going pro) dissipate – require empathetic understanding, therapy, and a lot of healing time. 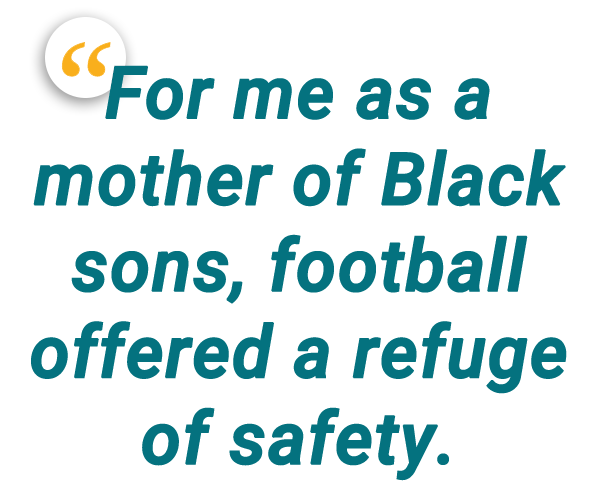 For me as a mother of Black sons, football offered a refuge of safety. Football practically went August-to-August, through summer break and after school. There was also chess, drama, and band, but mainly, there was football. “Idle” wasn’t on the schedule. Daily football practice meant getting home at 8, a 2-hour nap, dinner, and homework. Then bed and repeat.

Little else in Black Mom life translates into “he can’t get into trouble,” translates into “he’s not in these streets,” is code for one more layer of “protection” between him and law enforcement, translates into less risk of  emotional humiliation, physiological intimidation, psychological terror, physical threat. Being a Black boy in this country could never mean it won’t happen, but hope wills it to happen less.

In this country, as early as the age of three, Black boys learn that they cause people to be afraid. They learn that their dignity rests on how other people define them and on their own skill (and will) to defend their humanity. We’ve made Black boys into monsters.

I know this is true because we have all accepted the violence that attends all of their lives. Yes, the violence that tragically attempts to pass for conflict resolution in neighborhoods that have been brutalized by intentional governmental neglect. Yes, the glorification of violence in pop culture from rap music to video games. And also the violence that comes with living in a carceral state, in a society that measures your value by what you are able to produce or consume for corporate benefit. The violence that is foundational to a country of stolen lands and stolen hands. The violence that allows a 12-year-old boy playing in a Cleveland park to be shot and killed by police seconds after he arrived, or a 17-year-old boy to be murdered by a volunteer who believed the unarmed young man he pursued was a danger, or a 43-year-old man to be slowly executed by way of a knee to his neck on a public sidewalk. Black Boys are monsters, and they must be put down.

Football, for many families with Black sons, might be a kind of Hunger Games: We’ll send our son into this arena where at least he has a chance – as opposed to the other arena, where the odds are slim. For some, football is a savior and a demon at the same time. Holding the nuance of that complexity is something mothers like myself know how to do well. We are expert at making deals with angels and devils alike for the privilege of hearing the key in the door and the grunted response to “You alright?” 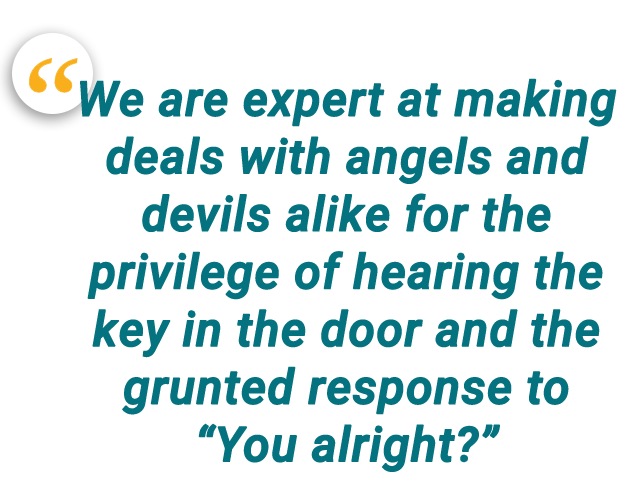 Hockey and soccer are also violent sports to developing bodies. My nephews play lacrosse and soccer and all four have sustained injuries, from concussions to broken bones. My daughter is a dancer, a different kind of athlete, and was on crutches twice. Basketball has its own relationship to overt physical aggression. I’m a recovering Knicks fan and the ‘93-‘94 team can beat ANYBODY playing today—as long as Jordan and Miller stay retired.

But this most recent horrifying event involving Damar Hamlin ought to give us all a moment of pause to be in deep inquiry about how we as a society have grown so desensitized to the breaking of Black boy bodies and spirits. It’s frighteningly normalized. In sports, in schools, in cities, in the suburbs, in rural areas.

It has been beautifully powerful to witness the global outpouring of care for this young man, his family, his teammates, and his competitors. One question that keeps coming back to me is, what is the lesson here? Another, where is the opportunity? Also, how might this moment of world pause serve?

As Damar Hamlin begins the process of healing and recovery, how might we also begin to heal and recover? How do we nurture Black boys and men? How do we protect them? Treat them to and with tenderness? Kindness? Engender their sense of belonging? How can we honor their vulnerability and normalize its presence? How can we create spaces, including in schools, where their dignity and humanity are assured, their spirits lifted – and their bodies kept whole?

Photo by Johnny Williams on Unsplash

Some adults seem unable to grasp that young people are scared. Terrified. And angry. They feel abandoned. We can do better by our kids.
See and Be Seen
"Because love is in the details, we can operationalize it to rebuild schools into centers of joy, creativity, curiosity, collaboration, and cultivation of the unlimited potential of young people."
See and Be Seen
Self-care isn’t just an essential part of communal care, it is what makes community possible.
See and Be Seen
self-care