The 4Rs in Ohio

A KINDERGARTEN STUDENT in Warren, Ohio, whom we’ll call Mia, was both a leader and a bully in her class. “The other girls would emulate her,” says Morningside Center staff developer Bruce Gill. “If she had a certain color of fingernail polish on, the rest of the girls would get the same color.” But Mia also intimidated her classmates, and over time more and more of them didn’t want to play with her. 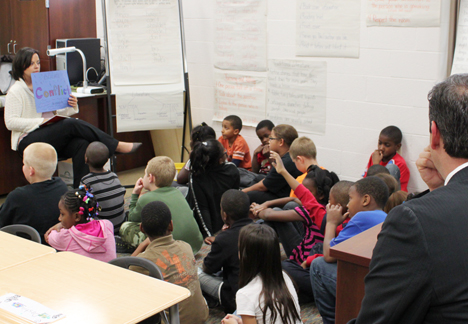 A KINDERGARTEN STUDENT in Warren, Ohio, whom we’ll call Mia, was both a leader and a bully in her class. “The other girls would emulate her,” says Morningside Center staff developer Bruce Gill. “If she had a certain color of fingernail polish on, the rest of the girls would get the same color.” But Mia also intimidated her classmates, and over time more and more of them didn’t want to play with her.

As part of  Skills for Life, Mia’s teacher had introduced class meetings as a way to address their problems and concerns.

One day, Mia came to class feeling upset about what was happening between her and the other students. She asked the teacher if they could have a class meeting to talk about it.  In the meeting, Mia told the class what she’d been feeling and asked her classmates to tell her why they wouldn’t play with her anymore.  And one by one, the students told Mia about the things she did that made them want to avoid her. The teacher then asked Mia if she wanted to know from her classmates what she could do to be friends with them again, and she said yes. So members of the class told Mia what they thought she could do differently.

The teacher, says Bruce, “was blown away that this student would ask to have a class meeting – and impressed by the way the rest of the class handled it.” Now, says Bruce, Mia “still has her moments. But she’s different. Things have changed.”

For the past two years, Bruce – along with Lynne Hurdle-Price and Linda Lantieri of Inner Resilience and Tom Roderick of Morningside Center – have been supporting teachers in Warren and Youngstown in implementing the program. Already, says Bruce, the program has had a palpable impact on students and the classroom climate. A new first-grade teacher who had just been introduced to SEL Skills for Life was surprised when she began talking about it with her first graders, who had been part of the program last year. “At one point she  couldn’t remember the full name of the program, and the whole class filled her in,” laughs Bruce. “These kids are coming into the first grade knowing the definition of ‘conflict.’ Their language is different. We’ve definitely seen carry over from kindergarten.”

Many of the teachers now in their second year with the program “have really taken the curriculum on, and they’re working as a team to bring new things to it,” Bruce says.  For instance, teachers had introduced students to put-downs and put-ups – and to the idea that we all have a bucket that we can either fill up with put-ups or empty with put-downs. “Well, these teachers brought an actual bucket into class,” says Bruce. “The kids go and fill it up with marbles or whatever when there are put-ups, or take the marbles away when there are put-downs.”

“Working with Bruce, Lynne, and Linda has been great fun,” says Morningside Center’s executive director Tom Roderick, who joins them in conducting the training. “This is really a dream team.”

SEL Skills for Life also includes family workshops that incorporate both relaxation/mindfulness techniques and social and emotional learning skills. Parents have also had a chance to learn SEL skills and to see the skills their children are developing. “We’ve had parents go visit classes where their kids are doing SEL Skills for Life. They get to hear their first graders using words like ‘de-escalate.’ It’s very exciting.”

In a survey, 4Rs students were asked about the most important thing they learned, and about situations where they were able to use their new skills.  Here are some of their responses:

In a survey, 4Rs students were asked what they do when they get upset.  Here are some of their responses:

4Rs
Student Voices
Educators at the Dunbar Learning Complex in Atlanta have built our 4Rs Program into their remarkable center.  For a closer look, take their virtual tour or read about their approach.
4Rs