Ravitch: 'Children Can Not be Standardized'

Excerpts from Diane Ravitch's speech at the 2013 Courageous Schools Conference. 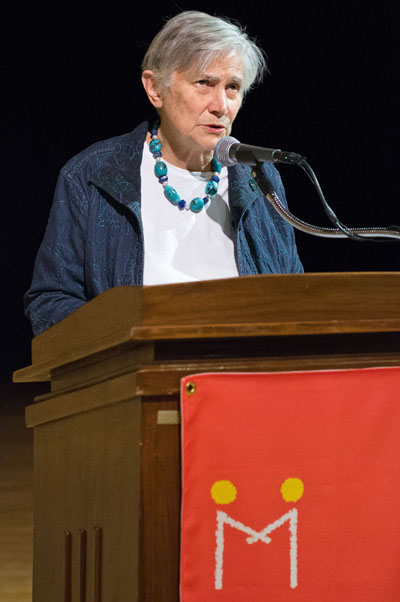 Excerpts from Diane Ravitch's speech at the 2013 Courageous Schools Conference.

See the video of her talk.

What all these programs have in common is that their creators believe that testing and choice is the very thing to improve education. That testing and choice will help the neediest children, will raise up every child and will transform our society…. They  claim that they’re leading the civil rights movement of our time… and that testing, and accountability and competition and choice  will solve the problems of poor academic performance, will end poverty and other social ills.

Well, like them, I used to think that testing and accountability would raise standards and achievement for all, I used to think that charter schools would save poor children from failing public schools. And I supported No Child Left Behind when it was passed into law in 2001. And I supported Mayor Bloomberg when he said he knew how to fix the schools in two terms in office.

But I was wrong, and so were they.  The difference between us now is that I say I was wrong while they keep saying the same things.

I want to talk a bit about this so-called reform movement… I call it a corporate reform movement… because its ideas mimic business thinking:  treating schools as if they were shoe stores or hamburger joints, treating children as if they were products that can be shaped and standardized, and treating test scores as profits and losses. These corporate reformers even speak of having a portfolio of schools, each one managed by a different entrepreneur. Sort of like a stock portfolio where the management is supposed to keep the winners and dump the losers. And there are many cities now doing this, opening schools and closing them…

I want to contrast the ideas of the corporate reform movement with the principles of Morningside Center. Morningside Center believes that education should meet the needs of the whole child. When they speak of the whole child, they speak of social and emotional needs, not just test scores…. Addressing the needs of the whole child means recognizing that children have many needs, not just the need for a higher test score, and that they develop at a different pace, and that every child is a unique human being, different from any other and cannot be standardized.