The Brooklyn Academy of Global Finance is using circles to bolster students and the school community, with support from Morningside Center. This week their great work landed them in the news. 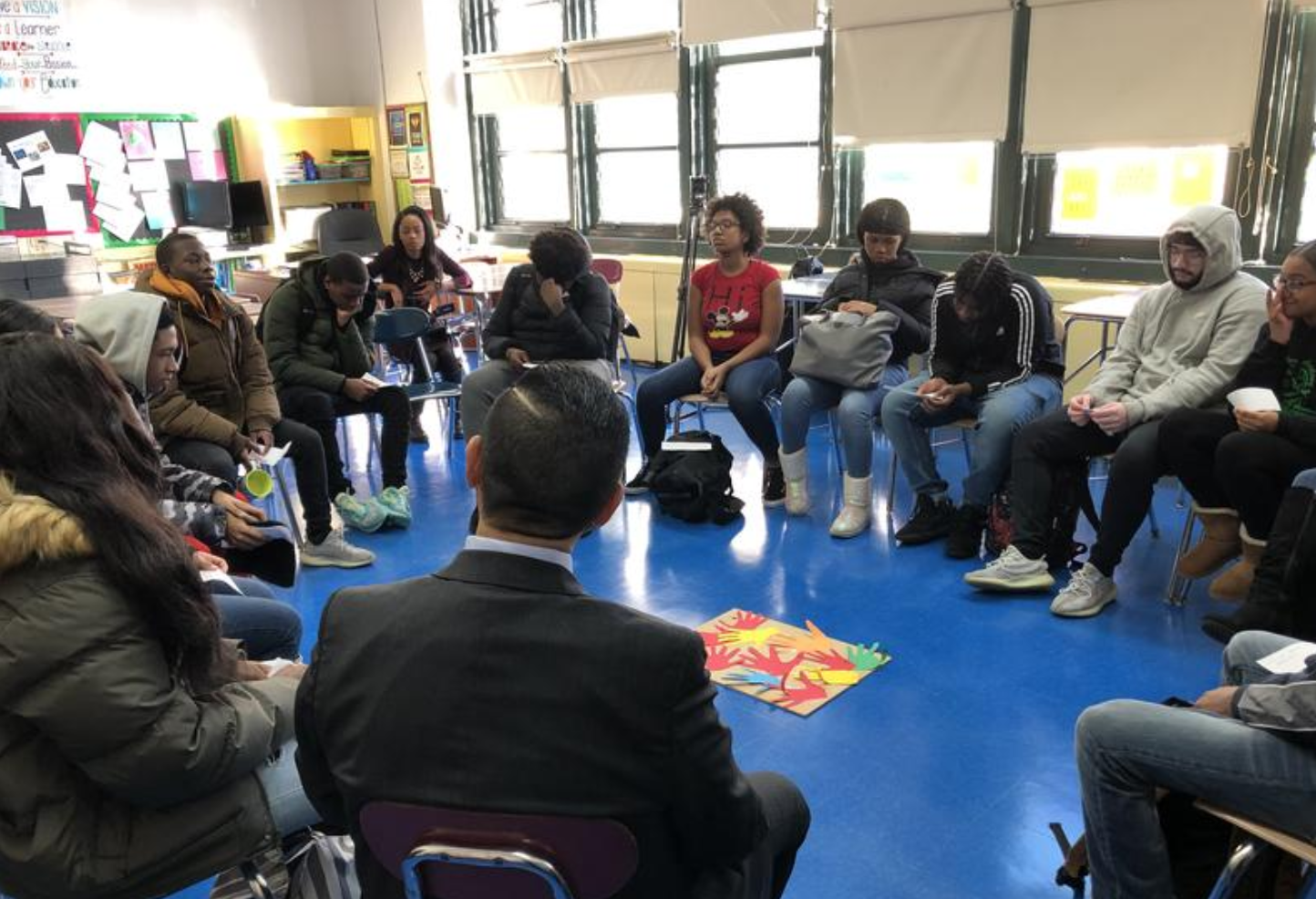 Students at the Brooklyn Academy of Finance sit in a "restorative circle." ( Jessica Gould/WNYC )

Chancellor Richard Carranza felt the power of circle after taking in part in one recently at the Brooklyn Academy of Global Finance. The school provides weekly classroom circles for all students, with support from Morningside Center staff developer Marisa Zalabak.

Carranza's visit, reported by both WNYC and Brooklyn News 12, highlighted the powerful work this school is doing. After sitting in circle with students and hearing their thoughts, Carranza told reporters: "They've created a safe space where they can express how they're feeling." The impact is measurable, Carranza noted:  "The numbers of suspensions...have plummeted at this school because students have a way to talk about and resolve their issues." The school has seen a 63 percent drop in suspensions.

Morningside Center's Marisa Zalabak says that it has been wonderful to work with staff and students at the school. She has been coaching staff over the past year in using restorative circles in their classrooms. "The principal is completely dedicated to restorative practices and to circles as a school norm," she says.

Teacher Catherine Devine told WNYC and Brooklyn News 12 that circles have improved the climate in her classroom. "I've definitely seen a change. [Students are] more willing to come to me if they are having a problem so that I have less outbursts in my classroom."

Chancellor Carranza noted that circles improve students' capacity to focus on academics -- and not just by reducing suspensions. "If students are worried with what happened this weekend, it is going to bleed into school. If students aren't mentally focused for academics, it's wasted time. The body may be there, but the mind isn't."

"We're trying to have the mind and the body be focused on the task at hand, which is academics," a teacher told reporters. "And the way to do it is to be very mindful and very explicit about creating the room for students do that."

In Education Week, we share eight strategies schools can use to address stress and hardship - and bring healing and joy.
Covid
SEL
Restorative Practices
Circles
Newsroom
Restorative approaches, writes Morningside trainer Marieke van Woerkom in Principal Leadership, send a powerful message to students: “We want you here and we care.”
Restorative Practices
Newsroom
The manufactured controversy over the supposed teaching of critical race theory in K-12 schools is being used to outlaw and suppress discussions of race, racism, and a fact-based teaching of history.
Racism
Newsroom