Kurds and the U.S. Withdrawal from Northern Syria

Students learn about the Kurdish people and discuss President Trump's controversial decision to withdraw troops that had been protecting Kurds in the region.

Share with students that on October 6, 2019, President Trump made the dramatic and controversial decision to withdraw all of the approximately one thousand American troops that had been stationed in northern Syria, near the border with Turkey. The decision followed a phone call between Trump and the President of Turkey, Recep Tayyip Erdoğan.

The move paved the way for a Turkish attack on the Kurdish people inside Syria, and set in motion a series of events that has changed the power dynamics in the region.

Ask students: What do you know about the Kurds, the people who live in this area?

Share with students that the Kurds are one of the indigenous peoples of a region that encompasses what is now southeastern Turkey, northeastern Syria, northern Iraq, northwestern Iran, and southwestern Armenia.  Although they have no state to call their own, the approximately 28 million Kurds in the region are a distinctive community with a common culture and language. They adhere to different religions, although the majority are Sunni Muslims.

Ask students to read the following backgrounder on the Kurdish conflict and the latest news. See this pdf for the map below, the reading, and discussion questions. 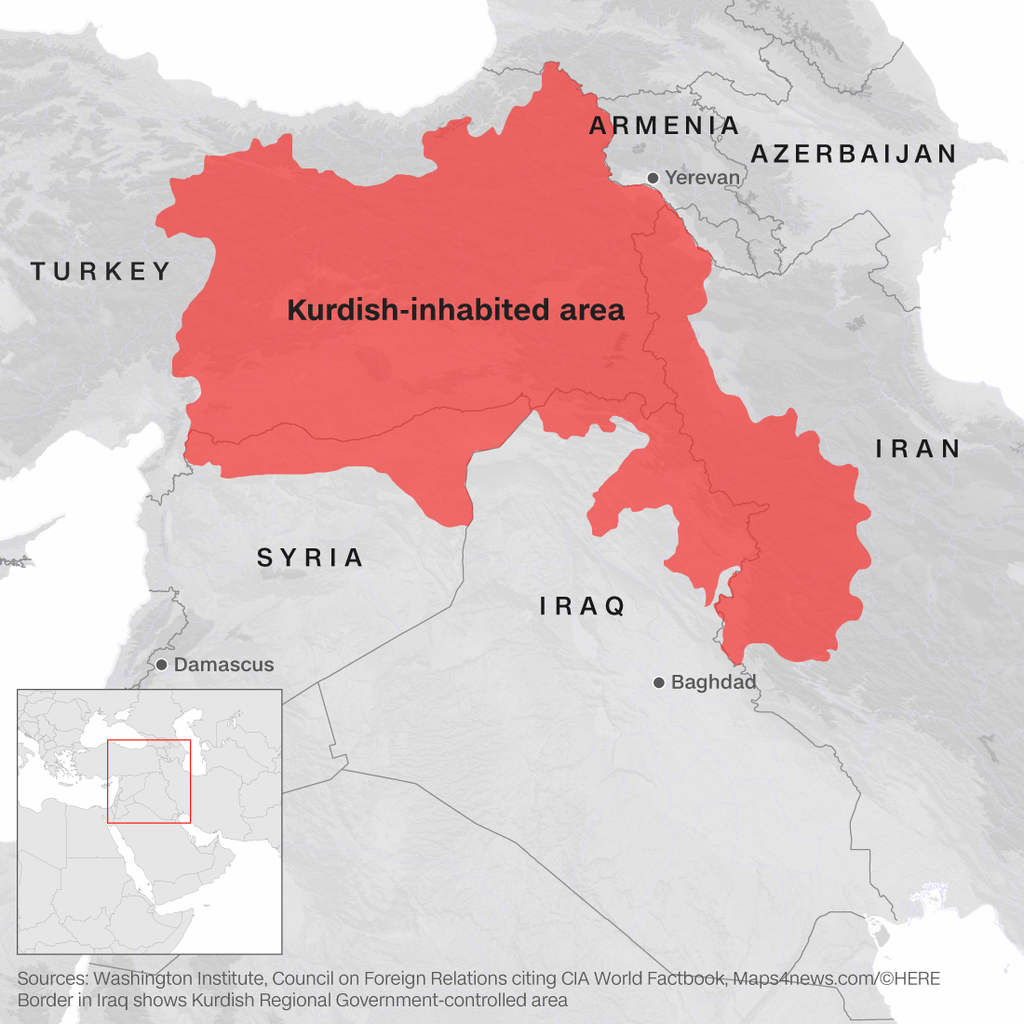 Kurds & the Conflict in Syria

The Kurdish fight for a land of their own goes back centuries. The immediate roots of the current conflict date to 2011, when multiple forces in Syria rebelled against the autocratic rule of Syrian President Bashar al-Assad. In 2012, Syrian Kurds (the country’s largest ethnic minority) formed their own small self-governed area in northern Syria.

In 2014, at the same time as a bloody civil war was raging in Syria, the group ISIS began taking over territory in Iraq and Syria in its attempt to create a fundamentalist Islamic state. The Kurds joined the fight against ISIS and became an essential partner in the U.S.-led coalition battling ISIS. As the Kurds captured ISIS-held territory, suffering enormous casualties, they incorporated the area into their self-rule.

Turkey is home to the largest population of Kurds in the world—about 12 million. The Kurdish minority has faced severe repression in Turkey, including the banning of the Kurdish language in speech, publishing, and even song. Even the words “Kurd” and “Kurdish” were banned. The fight for civil and political rights combined with a push for an independent state and erupted into an armed rebellion in the 1980s. The response from the Turkish state and military has been overwhelming and lethal. Tens of thousands of Kurds have been killed in a lopsided on-again off-again war.

The self-governed Kurdish areas in Northern Syria came together in 2014 to form an autonomous region with a decentralized democratic government. Rojava, as it is commonly called by Kurds, has de facto independence, but is not recognized as a nation by any other countries. Rojava is organized under loosely defined libertarian socialist ideals—emphasizing local control, individual liberty, and especially the equality of women and men. All institutions are run by a man and a woman, and women are well-represented in the army and a separate women’s militia. Women’s equality has been introduced into economic and social relations as well.

Turkey has confronted the semi-autonomous Kurdish state on their southern border. The Turkish government has viewed the Kurdish-controlled area as a potential safe haven for the Turkish Kurds and as a launching area for attacks across the border into contemporary Turkey. Ever since the establishment of Kurdish control, Turkey has threatened to attack the Kurdish-controlled parts of Syria and establish a “buffer zone” under Turkish control which would exclude Kurds. With the Syrian Army weakened by its civil war, the only obstacle to a Turkish invasion was the presence of American troops in the area.

Those U.S. troops, numbering around one thousand, had grown close to their Kurdish allies in the fight against ISIS. The Kurdish troops had proven themselves effective and determined combatants in the fierce fighting. The Kurds played a key role in recapturing vast territory from ISIS—and lost over ten thousand soldiers in the process.

President Trump’s decision to abandon the Kurds was unpopular among the American troops as well as among many elected officials from both major political parties. It was also unpopular among Pentagon and State Department officials who were willing to speak out.

Trump defended his actions by insisting that the United States has no vital role in the region. He tweeted:

I held off this fight for almost 3 years, but it is time for us to get out of these ridiculous Endless Wars, many of them tribal, and bring our soldiers home. WE WILL FIGHT WHERE IT IS TO OUR BENEFIT, AND ONLY FIGHT TO WIN. Turkey, Europe, Syria, Iran, Iraq, Russia and the Kurds will now have to figure the situation out…

Anyone who wants to assist Syria in protecting the Kurds is good with me, whether it is Russia, China, or Napoleon Bonaparte.

"[O]ur soldiers are not in harm's way, as they shouldn't be, as two countries fight over land that has nothing to do with us. And the Kurds are much safer right now. But the Kurds know how to fight, and as I said, they're not angels. They're not angels. ...

The consequences of the American withdrawal were immediate. The Turkish invasion began soon after the October 6 phone call between Trump and Erdoğan. Within days,tens of thousands of civilian refugees began fleeing the aerial bombardment and ground attacks. Turkey, with one of the largest militaries in the world, has the overwhelming military advantage.

On October 13, it became clear that the Kurds had been forced to make a deal with Syrian President Bashar al-Assad in order to withstand the Turkish assault. Syrian troops began entering cities and towns controlled by the Kurds. In addition, Russian military police were patrolling areas along the border. (The Russian government has been allied with Syrian President Bashar al-Assad.)  This not only hampers the Turkish offensive, but deals a blow to U.S. influence in the extremely volatile area. Assad’s allies, Russia and Iran, are eager to extend their own influence as the Americans bow out.

President Trump’s controversial withdrawal has had domestic consequences as well. The combined humanitarian crisis and foreign policy debacle has drawn condemnation not only from Democrats, but from Trump’s supporters in Congress, the media, and even the evangelical community. Trump responded with warnings to Turkey’s Erdoğan and threatened financial sanctions against some Turkish leaders. On October 16, 2019, the U.S. House of Representatives voted overwhelmingly to rebuke Trump’s actions.

While the details of the deal the Kurds were forced to make with the Syrian regime are not public, as of this writing, it’s clear that the brief period of Kurdish autonomy is likely over.  They were forced to ask the Syrian regime to help defend them against the Turkish attack, and to allow the Syrian army into the territory they controlled.  As Mazloum Abdi, the Commander-in-Chief of the Kurdish army put it, "If we have to choose between compromise and genocide, we will choose our people."

Students explore life in the immense Jordanian refugee camp of Za’atari by viewing and analyzing photos and consider the U.S. response to the Syrian refugee crisis.

Students learn more about the current conflict in Syria, and consider different points of view about how the U.S. should respond.

Students learn background on what is happening in Syria and the debate over a U.S. strike, consider opposing views on the issue, and discuss their own opinions and how they might act on them.