Exploring Wealth Inequality - And Proposals to Address It

How is wealth distributed in the U.S.? Students estimate it, examine the data, then discuss proposals by presidential candidates to narrow it.

Share with students that on September 26, 2019, the federal government released data showing that income inequality in 2018 was higher than at any time on record. (The U.S. Census Bureau first started tracking this information 50 years ago.)

It means that incomes are distributed unevenly. Of all the money Americans earned in 2018, a few very wealthy people earned a disproportionate share. The median household income in 2018 was about $62,000 – but a few Americans earned much more than that, while many earned much less.

Next ask students: What is the difference between a person’s “income” and their “wealth”?

Elicit or explain that:

A person who makes a high income is likely to have more wealth than someone with a low income. However, the wealthiest individuals have vast amounts of money beyond what they might earn month to month – such as money invested in stocks, property, or other assets.

Very often, wealth is passed from generation to generation, accumulating for decades or even centuries.

The legacy of slavery, housing discrimination, and other policies that made home-buying difficult or impossible for Black families is a major contributor to the U.S.’s enormous “wealth gap”  between Black families and white families.

(See our lesson on Reparations for more on this.)

Tell students that we’re going to do a quick group exercise on wealth inequality in the U.S. We will break into groups (of perhaps 4-6). Each group will work together to draw two pie charts.

Give each group a sheet of blank paper.

Pie #1:  How do you think wealth is divided in the United States?

Ask each group to draw a pie chart on one side of their paper that shows the group’s best guess about how wealth is distributed in the United States.

First, draw a circle that fills the page. This circle represents all the wealth owned by individual households in the U.S.

Next, decide on how you think wealth is divided up in the U.S. Break this pie chart into three sections:

When students are done, ask them to leave their chart on a desk and walk around the room to see how other groups distributed their wealth.  (Are the charts similar? How do they differ?) Then ask students to pick up their pie drawing and return to their groups to draw Pie #2.

On the other side of the sheet, ask each group to create a new pie. In this pie, they will show what their group thinks the distribution of income in the U.S. should be:

Once again, have students walk around the room to see how other groups thought wealth should be distributed.

Whole Group: Find Out the Facts

Now bring the whole group back together.  Ask students:

Show students this chart showing how wealth is actually distributed: 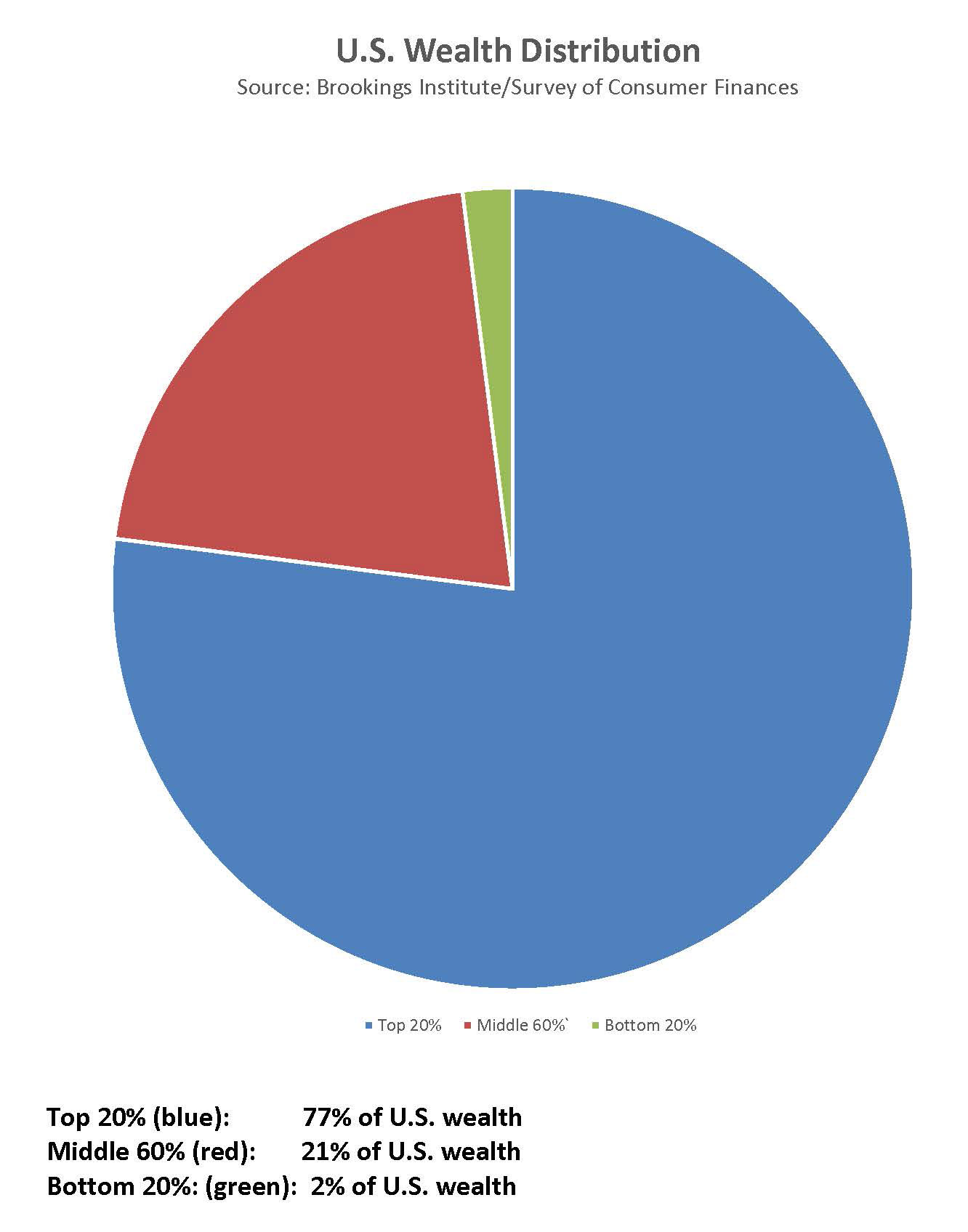 You might share that the top 1% alone own 29 percent of all the wealth. (This chart includes the 1%.) 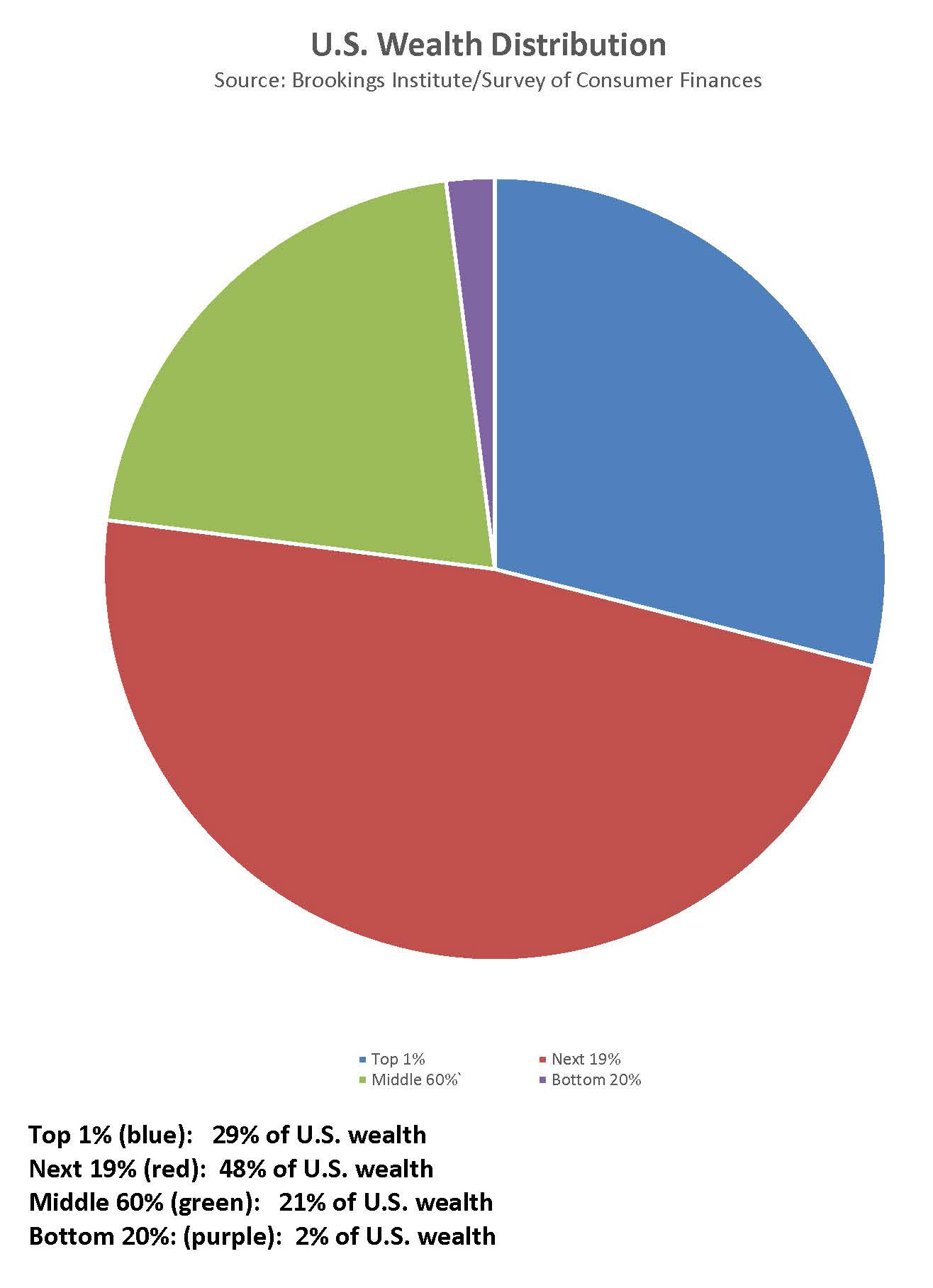 Income and wealth inequality is a major issue in the 2020 presidential election.

The likely Republican nominee, President Trump, has said that he is addressing income inequality by presiding over a growing economy. The Trump administration pointed to 2019 Census Bureau data showing income increases for Americans. According to the U.S. Census Bureau, the real median income of family households increased 1.2 percent between 2017 and 2018.

However, the Bureau’s data also showed that income inequality had grown, reaching a record level in 2018.

The wealth gap has also continued to widen. The U.S.’s three richest individuals (Bill Gates, Warren Buffett and Jeff Bezos) collectively hold more wealth than the bottom 50 percent of the domestic population, a total of 160 million people – at a time when millions of Americans are struggling to cover the cost of housing, healthcare, and education.

Democratic contenders for the presidency see growing economic inequality as a major issue – and some emphasize not only income inequality, but wealth inequality. Candidates have offered a range of proposals to address this inequality.

Two presidential candidates – Senator Elizabeth Warren and Senator Bernie Sanders – have released proposals for a “wealth tax” that directly addresses wealth inequality. The money raised through these plans would help fund some of the proposals made by these candidates – such as health insurance for all, free tuition for public colleges and universities, universal childcare, and a Green New Deal (including transition to a green economy and support for those most at risk from the climate crisis).

For a sense of scale, the total budget for the state of California was about $190 billion in 2018. The proposed U.S. Defense Department budget for 2020 is $738 billion.

While both candidates see their plans as a way to generate revenue for addressing inequality, Sanders is more explicit about his goal of reducing the wealth of the nation’s billionaires; he would cut their wealth in half over 15 years.

1. What benefits would there be of a wealth tax? What problems do you envision?

2.  Is it up to the federal government to redistribute wealth in this way? Why or why not?

3. Do you think the U.S. should enact a wealth tax? Why or why not?

Should two small, disproportionately white and rural states be the first two primary states? Students explore the debate, and the pros and cons of the Iowa caucus process.

Do big donors have too much influence in elections? Does the surge of small donors in the 2020 presidential election change the equation? Students explore the changing role of money in politics.

The 2020 election campaign has opened up a debate about whether public programs should be offered to everyone or only to low-income families. In this lesson, students consider arguments about universal versus means-tested public college and Pre-K.