After a worldwide youth climate strike, students share their thoughts and reflections, including through images and signs from the strike.

Young people around the world went on strike on September 20, 2019, to protest the failure of their governments to fight the global climate crisis. The day-long strike was part a series of international strikes and protests between September 20 and September 27, timed to coincide with the United Nations Climate Summit on September 23. The protests took place in some 4,500 locations in 150 countries.

The student climate strike movement started in August 2018 when Greta Thunberg, then 15, began protesting alone on the streets of Stockholm, the capital of her home country, Sweden. By January, tens of thousands of students in Belgium were taking to the streets on a weekly basis to protest the lack of government action in combating the looming climate catastrophe.  Their protests inspired further action across the European continent and the world.

On September 20, students from around the globe joined the movement, skipping school to demand action to address a crisis that threatens their future. In New York alone, hundreds of thousands of young people and their allies showed up.

Show the picture below of the Climate Strike in New York City, featuring students from Mott Haven Community High School in the Bronx. 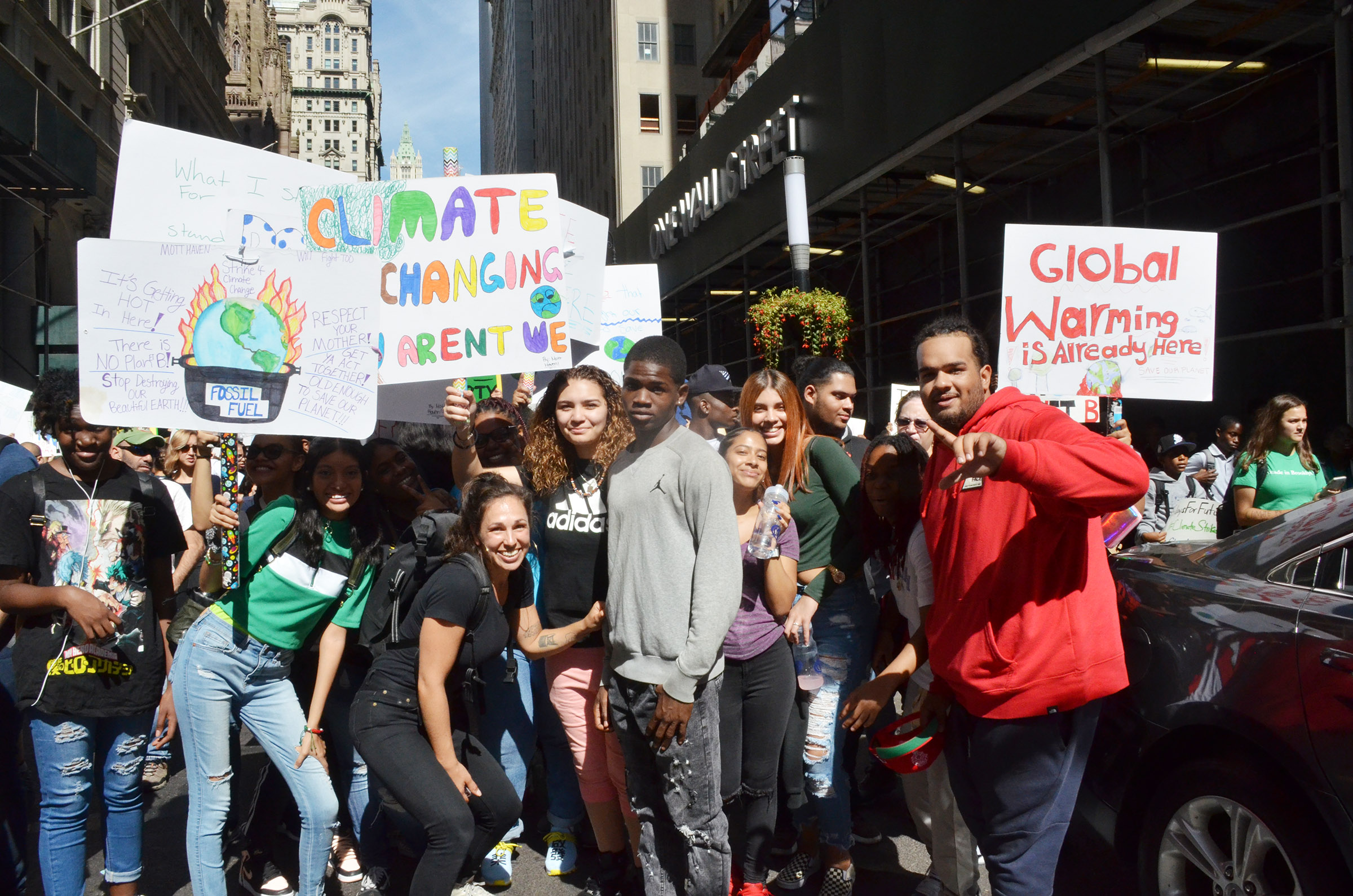 Ask students what they know about the strike that took place around the world on Friday, September 20, 2019.

Ask for a show of hands of who attended.

Images and Voices from the Climate Strike

Next give students this PDF handout, which includes a set of photos of people (and their signs) at the climate strike in New York City.  Alternatively, consider placing the images around the room, using the slideshow below, or if you are seated in a circle, place them at the center of your circle for students to see.

Invite students to look at the images and discuss some or all of the following questions:

Climate Slogans from the Strike

Print up the slogans from the signs at the strike found below and in this PDF.

Cut the slogans into individual slips of paper and put them in an envelope.  Send the envelope around the circle inviting each student to take out a slip of paper. If they’re comfortable reading the slogan they picked out loud, invite them to do so. If they’re not, they can put the slogan back in the envelope and pick a different slogan to read out loud.

Ask students to hold on to the slip of paper before passing the envelope to their neighbor. In this way, you’ll hear a variety of slogans from the climate strike one after the other.

When all students have had a chance to read out loud a slogan from the strike, invite students to respond to the following questions and prompts (using a talking piece, if that is your practice):

Joanna Macy and Chris Johnstone have been climate activists for decades.  They recognize the enormity of the challenge we face when it comes to the climate crisis and have come up with ways to address this challenge in their book Active Hope: How to Face the Mess We’re in Without Going Crazy.

Invite a student to read out loud the following quote describing Active Hope (from page 3 of the book):

“Active hope is about becoming active participants in bringing about what we hope for.  Active hope is a practice… it is something we do rather than have.  It is a process we can apply to any situation and it involves three key steps. First we take a clear view of reality; second we identify what we hope for in terms of the direction we’d like things to move in or the values we’d like to see expressed; and third, we take steps to move ourselves or see our situation in that direction.  …. We focus on our intention and let that be our guide.”

Suggest to students that the millions of young people around the world who participated in the climate strike demanded that everyone, and adults in particular, must come to terms with the reality of the world we live in.  This is step one of active hope. Through the signs, presentations and performances at each strike event, strike organizers and participants elevated the reality and the challenge of the climate crisis.

There is much more each of us can do, on our own or together, to learn more about this reality. (See these TeachableMoment climate lessons for some possibilities.)

Next, invite students to think about step two of active hope: “Identify what we hope for in terms of the direction we’d like things to move in or the values we’d like to see expressed.”

Give students a few minutes to think about this. Ask them to write down on a small piece of paper or index card:

Next, invite students, in a dedication ceremony, to read out what is on their cards. If you’re facilitating this activity using a circle format, consider having students place their cards in the center piece after reading what’s on them, one after the other.

At the end of the ceremony, take a moment of silence.

Invite students with a show of hands to let you know if they’re interested in continuing to learn about, and work on, the problem of Climate Change. This can involve deepening their work on steps one and two, then continuing with step three of active hope: “taking steps to move in the direction we hope for in a way that honors the values we shared in the dedication ceremony.” We can let those hopes and values be our guide.

On September 20, 2019, students around the world will participate in a strike to demand immediate action on the global climate crisis. In this lesson, students learn about youth activism on the climate, including its origins, and discuss some of the problems and prospects of youth climate activism.

Where do the 2020 presidential candidates stand on climate change?  And why is the issue getting more attention in 2020 than in past elections? Students explore the issue, the candidates, and the social movements that are helping to drive the debate through readings, discussion, and activities.

Fiction exploring the possibilities of a changed and changing climate can be a powerful way to make these abstract futures more immediate for ourselves and our students.This listing of climate fiction (cli-fi) includes brief descriptions of a range of short stories and novels, along with questions for discussion. A second listing includes especially challenging visions of climate futures for teachers or students interested in reading further. (Updated January 2020)